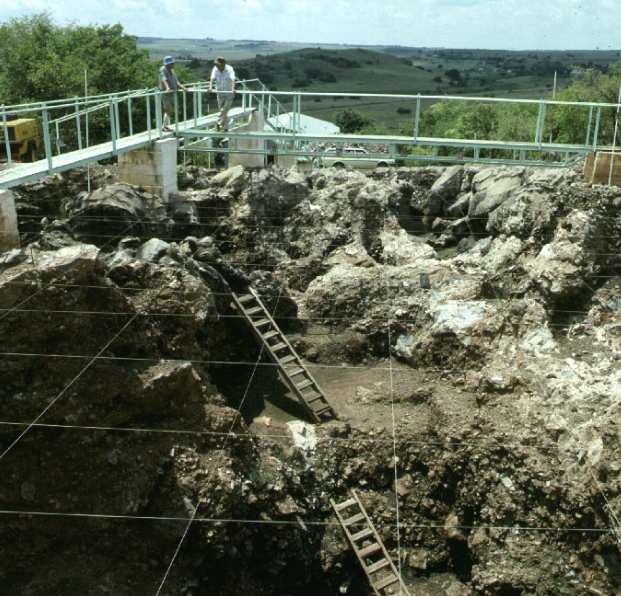 The fossils of our earliest ancestors found in South Africa are a million years older than previously thought, meaning they walked the Earth around the same time as their east African relatives like the famous “Lucy,” according to new research.

For a long time, the earliest species of humans is thought to have evolved in East Africa, based on fossil findings, including that of the famous Lucy, an Australopithecus afarensis who lived in what is now Ethiopia some 3.2 million years ago.

However, that theory could be shifting, based on an innovative dating technique. As the AFP reports, a new analysis of fossil remains of the Australopithecus africanus species discovered in South Africa in the first half of the 20th century and initially dated to between 2.1 and 2.6 million years old shows they are actually more than a million years older, making them “Lucy’s” contemporaries.

In a study published Monday in the Proceedings of the National Academy of Sciences, an international team of researchers turned to an innovative dating technique.

They used space particles to analyze bones in the Sterkfontein Caves, part of a major fossil site in northern South Africa known as the “Cradle of Humankind.”

Sterkfontein is a South African National Heritage Site and was also declared a World Heritage Site in 2000. The area in which it is situated is known as the Cradle of Humankind.

The Sterkfontein Caves contain more remains from Australopithecus than anywhere else on Earth, according to Darryl Granger, a geology professor at Purdue University and lead researcher of the study. “There are hundreds of them,” he told Insider.

Not only that, but many of the remains had been dated between 2.1 and 2.6m years old. Among them was “Mrs. Ples”, the most complete skull of an Australopithecus africanus found in South Africa in 1947.

But “chronologically that didn’t fit,” said French scientist Laurent Bruxelles, one of the authors of a study. “It was bizarre to see some Australopithecus lasting for such a long time,” the geologist told AFP.

Also casting doubt on Mrs. Ples’s age was recent research showing that the almost-complete skeleton of an Australopithecus known as “Little Foot” was 3.67m years old. Such a big gap in ages between Mrs. Ples and Little Foot seemed unlikely given they were separated by so few sedimentary layers.

But with the caves having a number of different layers, as well as animal bone fossils, which might be from different eras than the fossils next to them, it has proven to be difficult to accurately date Australopithecus remains.

So, to accurately date the fossil remains, the team used a technique known as “cosmogenic nuclide dating,” or burial dating, which involves examining the rocks that encased the ancient bones.

This unique technique looks at levels of rare isotopes created when rocks containing quartz were hit by high-speed particles that arrived from outer space.

Previous dating techniques underestimated the age of the fossils because they measured calcite flowstone mineral deposits, which were younger than the rest of that cave section, the study said.

“Their radioactive decay dates when the rocks were buried in the cave when they fell in the entrance together with the fossils,” said the study’s lead author, Darryl Granger of Purdue University in the US.

The researchers found that Mrs. Ples and other fossils near her were between 3.4 and 3.7m years old.

Dominic Stratford, director of research at the caves and one of the study’s authors, says that not only were Australopithecus africanus like Mrs. Ples “contemporaries” of east Africa’s Australopithecus afarensis, “Lucy,” but this could possibly alter our understanding of our ancestral history.

The South African Australopithecus remains were initially thought to be “too young” to be an ancestor of the Homo genus. That meant that Lucy’s home of east Africa was thought to be the more likely place where the Homo genus evolved, said Stratford.

“Over a timeframe of millions of years, at only 4,000 kilometers (2,500 miles) away, these species had plenty of time to travel, to breed with each other … so we can largely imagine a common evolution across Africa,” Bruxelles said.

The research showed that the history of hominids was “more complex than linear evolution,” Bruxelles added.