Canadian entomologists from Simon Fraser University, along with workers from a local pest control company discovered larvae of the Aedes japonicus in standing water in a tarpaulin in Maple Ridge, a suburb east of Vancouver, reports CBC News.

Researchers, along with Burnaby pest control company Culex Environmental Ltd., initially investigated and collected larvae of the Asian Bush mosquito in July 2014. They returned to Maple Ridge in February this year and discovered over 200 adult mosquitoes, demonstrating the larvae had survived the winter.

Then in late May, an adult female mosquito was found about 13 kilometers east of Maple Ridge, enjoying “a blood meal,” say the researchers. 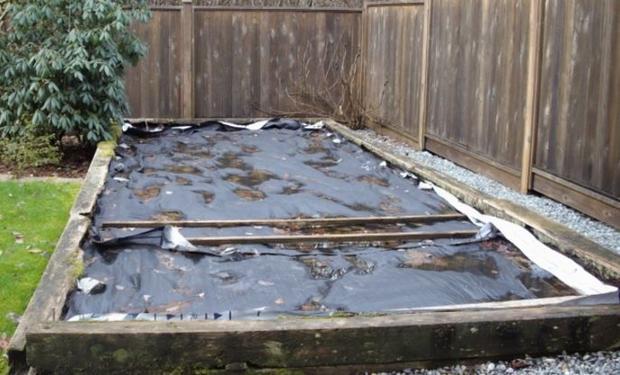 Black tarpaulin in Maple Ridge garden, ∼3 by 6 m2 with many depressions up to 4 or 5 cm deep, filled with water and plant debris. Ae. japonicus larvae were collected from the depressions in both 2014 and 2015.
M. Jackson, Et. Al.

The scientists described their findings in the Journal of Medical Entomology, published online November 2, 2015. “The ability of these species to survive and spread rapidly is well documented by its history in Europe,” the study said. The study also demonstrated the mosquito’s ability to transmit a number of diseases, including West Nile virus, varieties of encephalitis and dengue fever.

The Asian Bush mosquito’s eggs are resistant to freezing and drying, the study said. This has already been seen in Europe, and again documented in the present study. This particular mosquito was found in Eastern Canada and several eastern U.S. states in 1998. It was found in southern Washington state and northern Oregon in 2008.

“We conclude that (the mosquito) is established in the Lower Mainland of British Columbia and that it is unlikely to have arrived here, since it was found in Washington in 2001, without human intervention,” the study said, according to The Star.

While studies are ongoing to pinpoint the insect’s point of origin, and the mosquito could pose a serious health threat, Dr. Michael Jackson, one of its authors of the study who works at Culex, told CBC News that at this time, there is no danger to the public.

“[The mosquito] is capable of carrying particular diseases only if that disease is present, and none of the diseases it carries are present.”