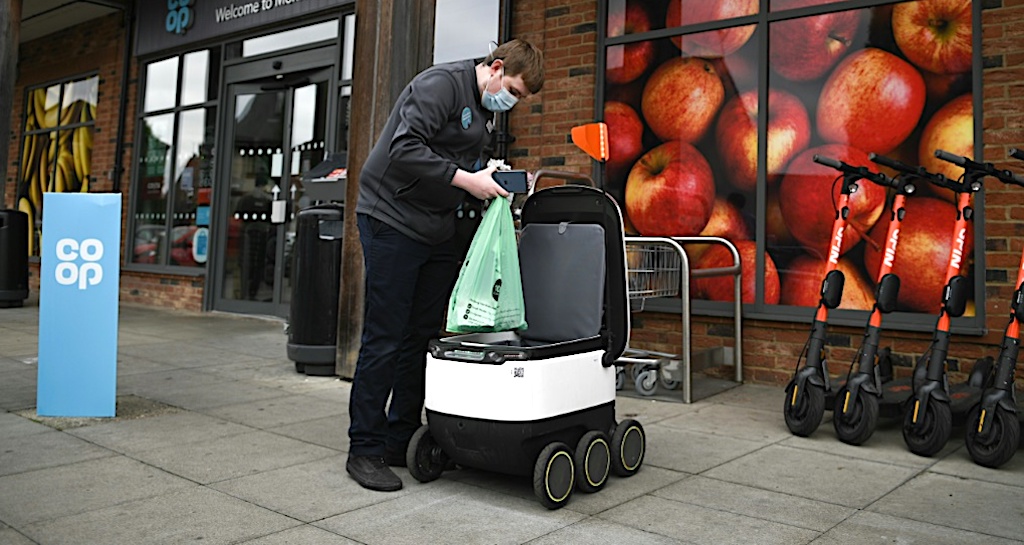 It’s famous for its roundabouts and statues of concrete cows. But the English town of Milton Keynes now has another claim to fame — a trundling army of shopping delivery robots.

The six-wheeled automated vehicles, launched three years ago, barely get a second glance as they ply the residential streets, some 80 kilometres (49 miles) north of London.

Numbers have grown to 200 in Milton Keynes and nearby Northampton, which introduced the service in 2020, with plans for as many as 500 to be in action in five more places across the country. 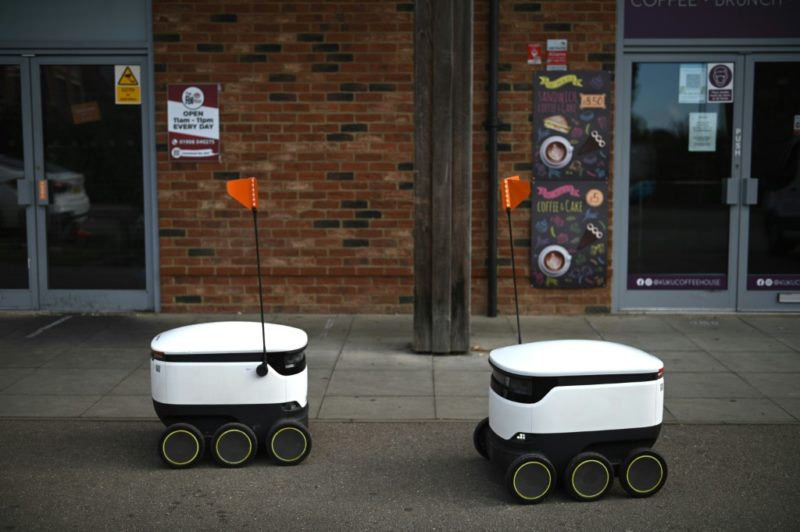 Some 200 delivery robots are operating in Milton Keynes and nearby Northampton, with plans for more. — © AFP

According to the robots’ operators, the squat white machines came into their own when Britain locked down last year as coronavirus hit the country.

“Everyone was so in need of contactless delivery during the pandemic,” Andrew Curtis, head of UK operations at Starship Technologies, told AFP.

The US company, which has quadrupled its deliveries in the UK, now makes 1,000 deliveries a day.

The company has signed a new agreement with longstanding partner the Co-op Group’s chain of supermarkets, to provide 300 new robots by the end of the year and triple deliveries. 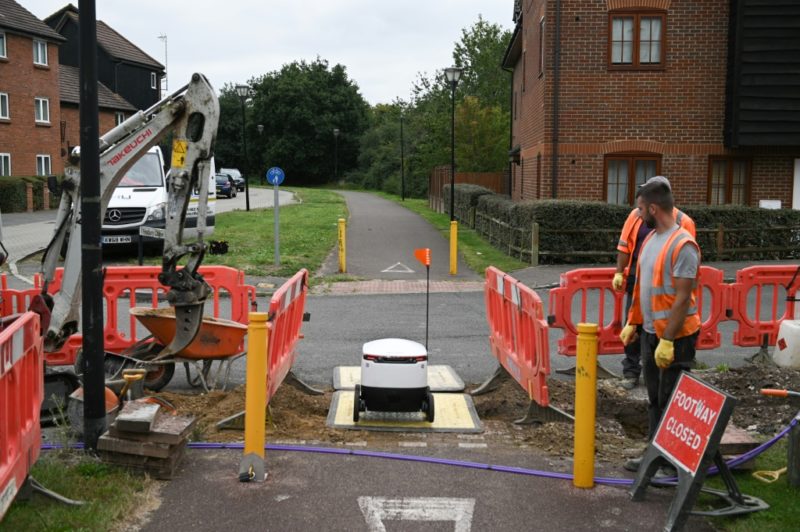 The robots can identify hazards. An operator can take control if they become stuck. — © AFP

In front of one of the retailer’s shops in Milton Keynes, which was the first to use the delivery machines in 2018, a dozen robots are ready and waiting.

With their antenna topped with an orange flag to aid visibility, they look almost like a queue of empty bumper cars.

An employee emerges from the shop and places the newest order inside one of the robots — a small bag containing raspberries, yoghurt and a bouquet of flowers.

With its lid locked, the droid immediately dashes out onto the pavement. It turns and moves forward to cross the road before stopping, reversing suddenly to let a car pass.

Fitted with cameras, sensors and a loud alarm if needed, the robots — first created in 2014 by the two founders of Skype — are 99 percent autonomous.

But if they become stuck, an operator can take control.

Once launched, the robot navigates the maze of footpaths that wind between Milton Keynes’ red brick houses.

When the way is clear, it can reach speeds of up to six kilometres (nearly four miles) per hour — a little more than a reasonable walking pace. 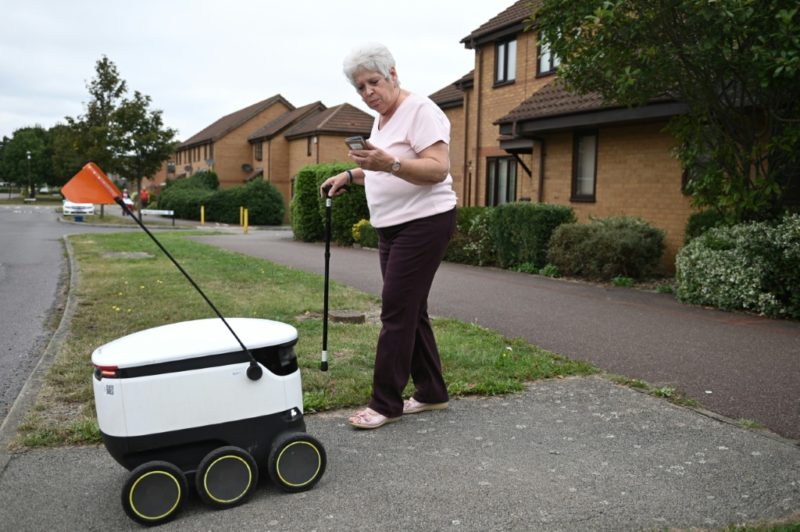 Sheila Rose said the robots have been a ‘godsend’as she finds it difficult to get to the shops. — © AFP

Deliveries reach customers in less than an hour.

The Co-op said the use of the robots is environmentally friendly as well as convenient, with 70 percent of Starship’s customers going without a trip in the car to a store or receiving a delivery from a fuel-powered vehicle.

Under the delivery system, the robots remain the property of Starship and orders are placed via an application they developed.

The company manages 1,000 robots, mainly in Britain and the United States but also in Estonia, Germany and Denmark.

The tech firm is not alone in the delivery robot race.

In the United States, for example, where it operates mainly on university campuses, it is jockeying for position with start-ups and logistics giants such as Amazon and FedEx.

As their numbers grow, the wheeled delivery drones have drawn criticism from unions, who fear they will take jobs from people.

The debate has made its way into US town halls, which are tasked with deciding limits on delivery journeys and rules around sharing the pavement.

“Fortunately, we’ve not had any accidents so far,” Curtis said, adding that in the UK Starship has obtained permission from local authorities for each of its operating locations. 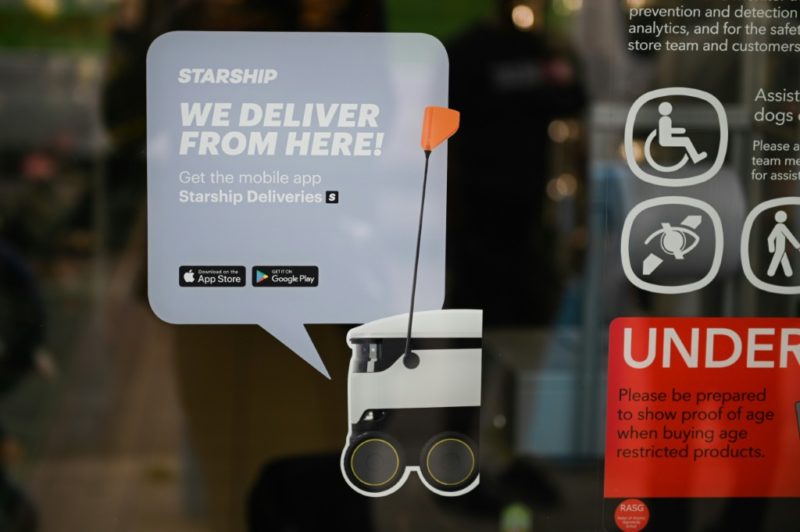 Starship Technologies has signed a deal with the Co-op Group’s chain of supermarkets. © AFP

The robot carrying raspberries, yoghurt and flowers continues its journey, hesitating as it encounters a gaping hole, the result of ongoing road maintenance.

Roadworkers look non-plussed as they put down planks to bridge the gap.

When the delivery robot finally reaches its destination, Sheila Rose, 71, walks out of her house and unlocks it with her smartphone, to retrieve her groceries and blooms.

“If I can use it, anyone can,” she said, leaning on a walking stick.

“Because of my ill health, I have problems getting out to the shops,” she said, calling the robots a “godsend”.

The delivery drones have become so essential to the septuagenarian that some weeks she uses them everyday. “I’ve got great-grandchildren. And they love it,” she added.

In this article:Robots, united kingdom