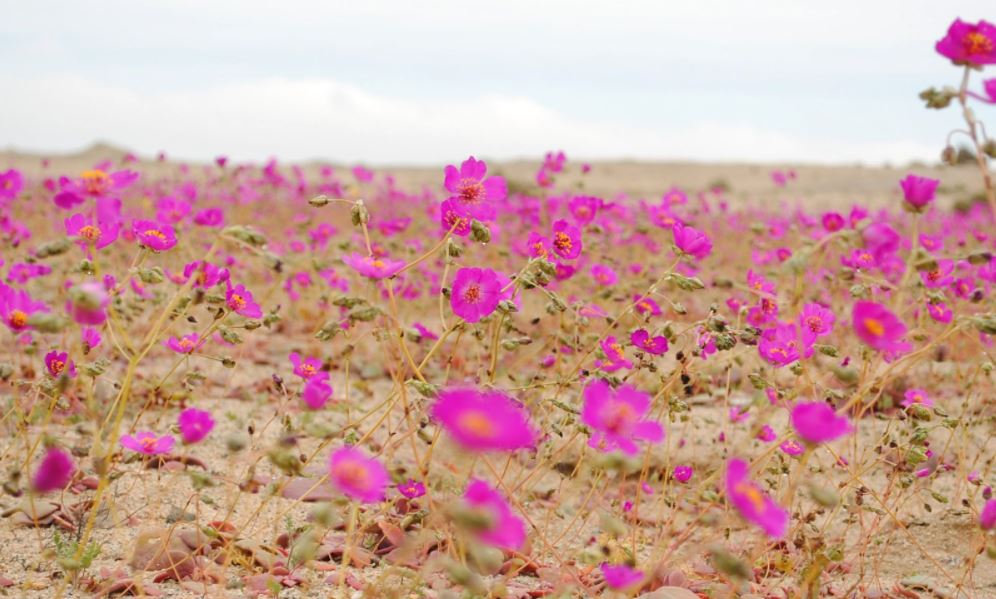 The sand dunes of Chile’s Atacama Desert are once again bathed in vibrant colors following the sprouting of flowers in recent weeks in the world’s most arid desert despite a persistent drought.

Chile’s Atacama Desert covers a 1,600 kilometer (990 miles) strip of land on the Pacific Coast of South America, west of the Andes Mountains. The Atacama also has the distinction of being the driest nonpolar desert in the world.

The almost total lack of precipitation is the most prominent characteristic of the Atacama Desert. The average rainfall is about 15 millimeters (0.6 inches) per year, although some locations receive 1 to 3 mm (0.04 to 0.12 in) in a year

And even though there are some parts of the vast desert that never get any precipitation, there is one area around Copiapo, a city 800 kilometers (500 miles) north of Santiago, that has become a natural laboratory – providing scientists with a chance to study how such species can adapt to extreme climates.

In this particular region, a complex ecosystem has been created, in which flower seeds can lie dormant in the soil for decades waiting for enough rainfall to allow them to come to life.

“When there is a certain amount of precipitation, which has been estimated at approximately 15 cubic millimeters, it triggers a large germination event,” biologist Andrea Loaiza from La Serena University said, according to Reuters.

The bloom is irregular, said Loaiza, and the last significant one happened in 2017. But it may not happen forever. The pata de guanaco and yellow ananuca are among 200 species of flowers that can bloom in this otherwise inhospitable environment.

The ecosystem is “very fragile because it is already on the limit,” said Loaiza, adding that “any disruption could break that balance.”

Even though this area is officially protected and people are only allowed to go into designated areas, it is common to see deterioration caused by the transit of vehicles. The threat of plant trafficking is present as well.

But with the climate crisis becoming worse, it is important that we study these species to understand how they survive in such extreme conditions because global warming could turn many fertile regions of the planet into deserts like the Atacama.

“To adapt to a climate crisis, we need to understand the natural processes,” said geneticist Andres Zurita. “We want to learn from these plants because these species demonstrate different adaptation mechanisms.”