On Monday, Microsoft published a blog post in which it claimed Edge can last 50 percent longer on a charge than Google Chrome, Mozilla Firefox and Opera. Using a combination of lab and real-world testing, it concluded that Edge could extend a typical user’s battery life by 36-53 percent.
Two days later, Opera retaliated. In a pointed blog post, the Opera engineering team said “we love it when someone picks a fight,” beginning a detailed attack on Microsoft’s testing of Edge. It slammed Microsoft for not being transparent about its methodology, claiming it takes a more valid approach.
The Opera team conducted its own testing. In its results, Opera inevitably came first, lasting three hours and 55 minutes on a single charge. Edge came second, at three hours and 12 minutes, and Chrome last, at two hours and 54 minutes. At first glance, Opera appears to have easily beaten Edge. Based on the words of the Opera team, Microsoft is deceiving users. 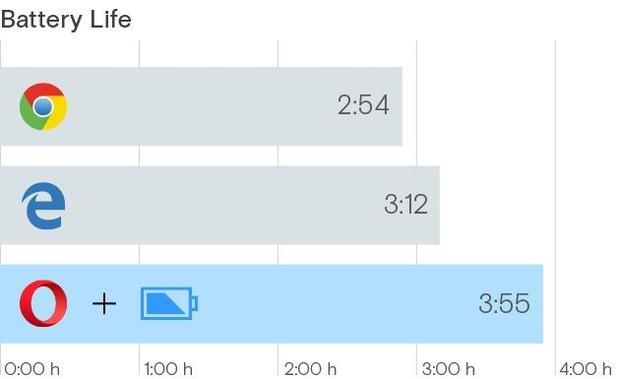 However, there is an important difference in how Microsoft and Opera conducted their tests. Opera enabled its native ad blocker and power saver features, giving the browser less work to do.
Battery saver reduces background tab activity, automatically reduces plug-ins and scales back animation quality. The built-in ad blocker saves even more power, cutting out adverts from webpages. Ad-heavy webpages will be the most power-intensive form of content for a typical browser user.
Microsoft did not enable Opera’s ad blocker in its tests because it was using the browsers on their default settings. Ad blocker is not turned on automatically so Microsoft did not include it. Battery saver is enabled for most users so Microsoft left it turned on.
This point did not go unnoticed by the Edge team. Kyle Pflug, an engineer building Microsoft Edge, tweeted “This test turned on an ad blocker, which is off by default. Not loading + rendering the same content in all browsers.”
Pflug’s point is valid but so is Opera’s methodology. Microsoft conducted its testing by leaving every browser on its default settings and loading the same webpages in them all. Opera went for a different approach, choosing to enable every possible power saving feature it could think of. Ad block won’t be turned on by every user though. The tests aren’t objective and cannot be directly compared.
“As Microsoft hasn’t revealed its full methodology, we were unable to run the same tests,” said Opera. “The methodology we applied instead was exactly the same as we provided before: browsing a set of popular websites where the automation simulates interaction with the website, making it close to what we expect normal browsing would be on such page.”
The real takeaway here is that Google Chrome lost by a significant amount in both groups of tests. Now the world’s most popular browser, Chrome still suffers from a lack of efficiency in heavy workloads, leading to shorter battery lives for people on the go.
Switching to Opera or Microsoft Edge is likely to increase your battery life by a significant amount. Which one you turn to will depend on your workload though. With Opera and Edge demonstrating that efficient web browsing can be done, perhaps Chrome and Firefox will be led to reduce their own power consumption in future updates. This would create better browsing experiences for all and inspire healthy competition between vendors.