The Wurdi Youang stone arrangement, located at Mount Rothwell near Little River, Victoria is an historic Aboriginal site that consists of about 100 basalt rocks, ranging from small rocks about 20 cm (7.8 inches) in diameter to standing stones about 1m (3.2 feet) high.

The rock formation is spread out in a sort of egg-shaped pattern or ovoid about 50 meters (164 feet) in diameter with its major axis aligning in a due east-west direction. Of particular interest is the three prominent waist-high stones that stand at the highest point on the western end of the arrangement of rocks. 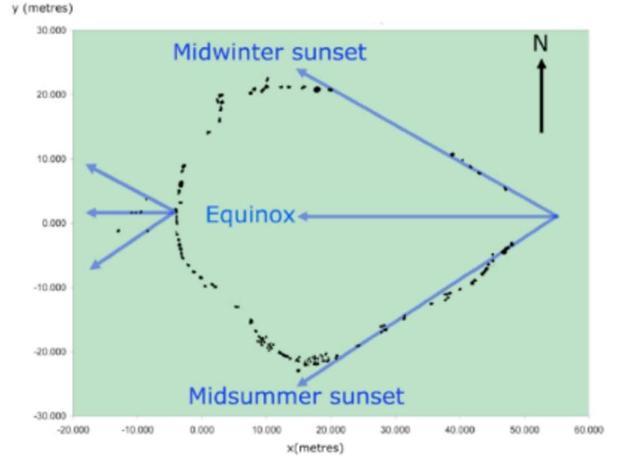 This image is from a paper published in an academic journal as well as a research blog by the authors of the paper. The diagram is an image from a survey of the Wurdi Youang stone arrangement in Victoria, Australia showing the proposed solar alignments.
Ray P. Norris

Custodian Reg Abrahams told the Guardian the stones clearly identify the equinox, the winter solstice, and the summer solstice. As an astronomical observatory, the position of the stars in the night sky was important to Aboriginal ceremonies, songs, navigation, and time-keeping.

Abrahams points out that the rock formation also depicts the landscape in art form. “There are a few mountain ranges around the site, and if you get in certain positions within the stone arrangement you’ll see three big mountains and the three large rocks which mimic them.”

The Wurdi Youang site was once owned by a farmer who fenced the site to protect it from being destroyed. In 2006, title to the land was turned over to the Wathaurong Aboriginal Cooperative, the traditional owners. Now, the cooperative and community elders are working with researchers at the site and its exact location is being kept under wraps.

So far, says Abrahams, scientists have found evidence of semi-permanent villages and evidence of early fishing and farming practices. There are areas where eel traps would have been set up and even signs of “gilgies”, or terraces used in farming.

“You see a lot of agricultural and aquacultural practices, so evidence of this agriculture may go back tens of thousands of years, pre-dating what anthropologists commonly think of as the dawn of agriculture which is about 11,000 years ago in Mesopotamia,” he said, according to Australia ABC.

The Australian Aboriginal constellation of “Tchingal,” the “Emu in the Sky”, which stretches from the Coalsack at its head, to Scorpius to the left.
en:User:Rayd8

Dr. Duane Hamacher is a leader in the study of Indigenous astronomy, and he has been working closely with the Aboriginal elders at the site to reconstruct some of the astronomical knowledge that has been lost since white Australians came to the continent.

Dr. Hamacher says that the early first Australians had complex knowledge systems, especially where the stars, planets and seasons began and ended. With white colonialism, much of the traditional knowledge was erased, so he is working with the Aboriginal community to bring that knowledge back.

Abrahams and Hamacher both are excited over the prospect of Murdi Youang being older than Stonehenge. “Some academics have referred to this stone arrangement here as Australia’s version of Stonehenge,” Dr. Hamacher said. He added, “I think the question we might have to ask is: is Stonehenge Britain’s version of Wurdi Youang? Because this could be much, much older.”

If indeed, Murdi Youang is much older than Stonehenge, it would rewrite the history of the Aboriginal people of Australia, and make historians rethink the notion that early Australians were nothing more than nomadic hunter-gatherers,

“We know agriculture started around 12,000 years ago, and if this site dates back to around then, perhaps Aboriginal people were some of the first, says Dr. Hamacher.