The International Business Times reports how the issue played out and affected a group of Reddit users. Throughout yesterday, Amazon celebrated its 20th birthday by offering lightning sales for periods of hours, resulting in some attractive deals on desirable products.
Perhaps the most attractive of all was on a 32GB metallic grey LG G4 though. The phone, off-contract but locked to the Sprint network, was mistakenly made available for just $0.01 in one Lightning deal.
Reddit user DualAxes noticed the amazing offer at around 1 a.m. PDT. Others quickly jumped in and ordered their one-cent phones, some ordering as many as five and still only paying $0.05.
Amazon quickly became aware of what had happened. It began contacting customers who had ordered the phones but its messages seemed confused and inconsistent. The company told some people that the phone was “out of stock,” not willing to admit its own mistake. Customers received gift cards but of varying, seemingly indiscriminate amounts. Some received $25 whilst others got as little as $3.
However, a few delighted customers ultimately found the LG G4 landing on their doorstep just hours later. The nature of Prime Day meant that all of the orders were scheduled for shipment in one day or less. This meant that even as Amazon scrambled to sort everything out and cancel the orders, some devices were already preparing for shipment or were even on the move. 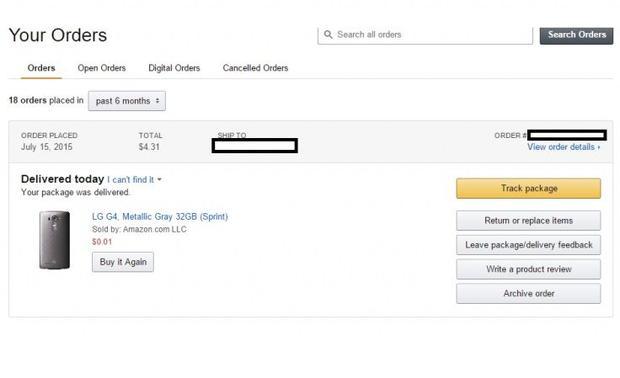 Some shoppers on Amazon Prime Day managed to buy an LG G4 for $0.01 and get it delivered
the-end

With no means of recovering the phones, the Reddit conversation quickly lit up with reports of couriers arriving with the G4. User “the-end” provided evidence of the successful delivery, posting a screenshot of the Amazon “Your Orders” page showing the $0.01 G4 purchase. It was followed up 10 hours after ordering with a photo of the phone’s box, fresh out of the Amazon packaging.
Amazon has not commented on whether it will be taking further action. It may not even be able to as in the eyes of the law the sale may be seen as genuine. The customers bought the phones at the listed price and Amazon ultimately delivered, implying that they had accepted the sale.
Those who received their phones will likely be enjoying LG’s G4 catchphrase, “Feel The Great”, today. For just one cent they have obtained one of 2015’s best smartphones, equipped with a 5.5-inch 2K display, 3GB of RAM, a 16MP camera and a Qualcomm Snapdragon 808 hexa-core processor.