1. Hospitals In The San Francisco Bay Area Using Robots Called Tugs
‘Tugs’ do various tasks that involve tending to patients. Tasks that the robots perform include delivering food and drugs, as well as picking up waste and laundry. They can also travel down the halls without running into people. The robots use travel maps to help them get around from place to place. They also offer features such as biometric security measures, which make sure that the drugs they are carrying reach the doctors they’re supposed to reach.

2. Robots Help Children Cope At The Doctor’s
Robots are being used in parts of Canada to help children cope with trips their doctor’s office. At a hospital in Alberta, robots are used to help make a trip to the doctor a little easier on kids. The robot the hospital uses is two-feet tall and is designed to mimic children’s actions. The robot can distract kids while they receive a shot or have blood withdrawal via a needle. In the future, the robot may be given new features, such as facial recognition software, which can make interactions between the robot and kids more personal.

Alberta Health Services and the University of Calgary conducted a study that explored how the robot helps kids through getting their flu shots. The study revealed that kids who used the robot reported 50 percent less pain compared to those who got the shot with little or no distraction. According to CBC, Dr. Tanya Beran, the robot’s creator, said there were a few kids who couldn’t receive their shot because they were kicking and punching, and the nurses walked away because they couldn’t give them their shots. However, they agreed to be vaccinated with the robot.

3. HAL Is A Robotic Medical Device That Helps Mobility In Disabled Users
HAL, short for Hybrid Assistive Limb, is a robotic medical device for diseases such as amyotrophic lateral sclerosis and spinal muscular atrophy. In November HAL, made by the company Cyberdyne Inc., was approved as a medical device in Japan. The Japanese government gave approval for Cyberdyne’s powered exoskeleton, and it is the first robotics device to be given the status as a medical device in Japan. HAL is a suit that helps mobility in disabled users or for those who have limited muscle ability. There’s hope that people who have paralyzed limbs may be able to regenerate damaged nerve networks by using HAL regularly. 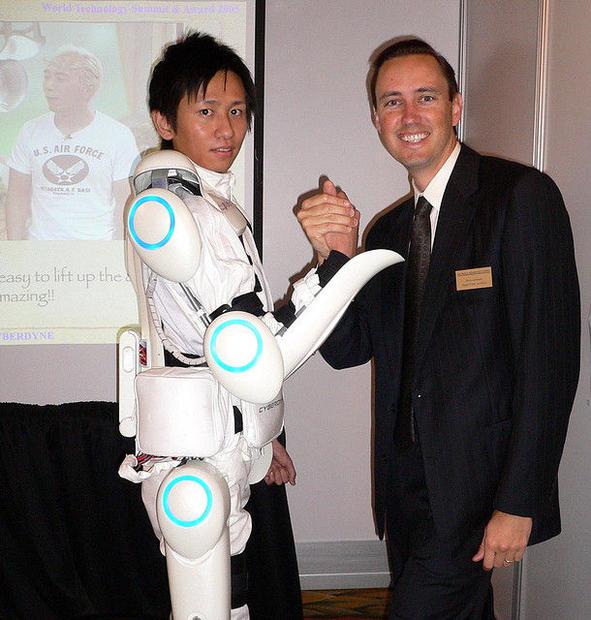 4. Japan’s Nurse Of The Future Is A Robot With The Face Of A Teddy Bear
The robot has been designed to help care for the aging population in Japan. The robot bear, dubbed ROBEAR, will be able to perform heavy-duty tasks such as lifting. These robots will have the ability to carry mobility impaired patients or help them stand up or support them while they are walking. The robot has yet to hit the market, but that may change, as researcher Toshiharu Mukai hopes the robot will be commercialized in the near future.

5. Robots Help Elderly Patients Living In Rural Areas
In November, new research from the University of Auckland found that healthcare robots in homes of rural elderly residents may help lessen social isolation, as well as help with their medical care. The study consisted of five participants trailing the robots in their homes for a period of at least three months. According to Phys, the study’s lead author, Dr Elizabeth Broadbent, said the results of the study suggest healthcare robots were feasible with a rural population and they may increase the quality of life for some patients, and they can remind patients when to take medicine and provide patients with companionship.

Dr. Broadbent said Patients found comfort in seeing the robot light up, as they felt it was the robot’s way of interacting with them.

The research revealed that the robots may reduce the need for medical care for some patients. Dr. Broadbent said Patients said that having the robot felt like they had a companion in the house and they didn’t feel so alone

The study may have shown a decrease in the rate of patients’ primary care visits and calls to the doctor. However, the decreased rates couldn’t be attributed for certain to the robot’s presence.

Speaking of robots helping the elderly, Toyota has been working on a robot that is designed to help the elderly or handicapped people. The robot is called HSR (Human Support Robot), and it uses three types of cameras in order to see, and it can be controlled via a tablet, smartphone or you can give it voice commands.

HSR is still in development, but once it is fully developed, it will be able to assist people in their everyday activities, and one day it may coexist with family members. It will provide support that may improve living conditions and one’s overall quality of life.

6. Robots Can Serve As Fitness Coaches For The Elderly
In Singapore, there are robots called RoboCoaches. These robots will soon be seen in senior activity centers across Singapore. According to CNN, Yaacob Ibrahim, Singapore’s minister for communications and information, said that the RoboCoaches will offer seniors personalized exercise routines that they will enjoy. Ibrahim added that RoboCoach will help make sure seniors perform exercise routines properly, which will help them get the most benefits from their workouts. By the time this year is up, there should be a RoboCoach in 25 venues.

Such robots are a must in Singapore because…

7. Robotics Helps Dentists And Patients
Voice Of America took a look at how robots help dentist and patients, such as how one machine reduces the length of the procedure used to make dental crowns. Today, the procedure can repair a damaged tooth in under three hours. Directions for a robotic milling machine are drawn up by a computer, and this tool works at creating the ideal shaped crown.

8. Robots May One Day Perform Wisdom Tooth Extractions
One robot in Tokyo has already done a wisdom tooth extraction on a human patient. The procedure took place over the summer. The robot, nicknamed Al Dente, is thought to be the first robot to have removed a wisdom tooth. The 55-year-old patient suffered no major inconveniences.

9. Robots Are Used In Hospitals To Kill Off Bacteria
A number of hospitals have been using robots that kill bacteria. One hospital is the University of Vermont Medical Center, which added two Xenex Disinfection Services robots to add more protection to the infection-control program at the hospital. According to Modern Healthcare, Sally Hess, the university’s manager of infection prevention, said the robots remove the element of human error. The market for disinfection robots is huge and it could grow to $80 million by 2017.

10. Nanorobots Are Being Tested And They Could Be Used To Treat Leukemia Patients
Nanorobots that could be used to treat leukemia patients are being tested. In March, Daily Mail reported that nanorobots are set to be used to treat patients who are seriously ill with Leukemia.The tiny robots, which are designed to swim through the bloodstream, has already been successfully tested out in animals. The lead researcher hopes that patients can be cured within a month. Ido Bachelet intends on treating a patient who has been given six months to live, and the aim of the injection of the DNA nanorobots is to destroy Leukemia cells, all without harming healthy tissue. The Daily Mail reported that Bachelet said judging from what was seen in tests, within one month the person is going to recover.