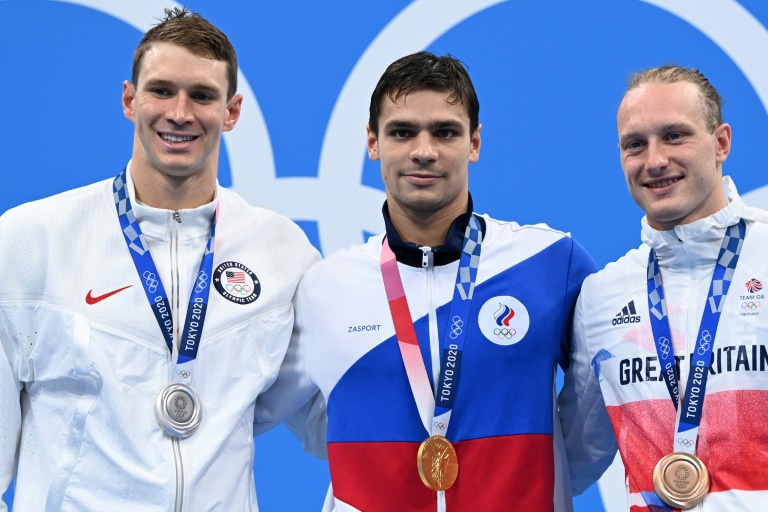 American Ryan Murphy accused Evgeny Rylov of doping after he was beaten by the Russian in the Olympic 200m backstroke on Friday, sparking an angry denial from Moscow.

Murphy raised doubts about the result when he claimed he was “swimming in a race that’s probably not clean”.

Rylov said he was “surprised” by Murphy’s “strange” suggestion.

In an explosive statement on Twitter, the Russian Olympic Committee (ROC) said “the broken record is once again playing the song about Russia doping and someone is diligently pressing the button on the English-language propaganda”.

The Russian Anti-Doping Agency said Rylov had been tested three times this year and that he was “prepared and clean.”

Murphy had to settle for silver after being beaten for a second time this week by the 24-year-old Rylov, who set an Olympic record of 1min 53.27sec.

It was the Russian’s second gold after he won the 100m backstroke on Tuesday.

Murphy won gold in the 200m at the 2016 Rio Olympics, where Rylov claimed bronze, but the pair have been on opposing trajectories since, with Murphy only breaking under 1:54 once, in 2018, while Rylov triumphed at each of the last two world championships.

Asked if he thought the race was fair, Murphy said: “I’ve got about 15 thoughts, 13 of them would get me into a lot of trouble. It is what it is. I try not to get caught up in that.

“It is a huge mental drain on me to go throughout the year that I’m swimming in a race that’s probably not clean, and that is what it is.”

Russia are banned from Tokyo 2020 after being found guilty of state-sponsored doping, meaning their athletes cannot use the Russian flag and anthem.

But more than 330 Russian athletes have been allowed to compete under the ROC moniker, meaning Russia has a significant presence in Tokyo — and some of their rivals believe their punishment has not been tough enough.

“The people that know a lot more about the situation made the decision they did,” said Murphy. “It frustrates me, but I have to swim the field that’s next to me.

“I don’t have the bandwidth to train for the Olympics at a very high level and try to lobby the people who are making the decisions that they’re making the wrong decisions.”

Rylov, who has never failed a doping test, said he was innocent and questioned whether Murphy’s comments had been heard correctly.

“I do not understand this suggestion. I was concentrating on the result. Next question,” said Rylov.

“It’s strange because if you look at my appearance and physiology it’s quite a strange suggestion to make. I am really surprised to hear this.”

Rylov then addressed the issue again in a tense press conference, flanked by Murphy and Britain’s Luke Greenbank, who came third.

“I have always been in clean condition. I’ve always tested and filled out the forms,” Rylov said.

“From the bottom of my heart I’m for clean sports. I’ve devoted my whole life to this sport. I don’t even know how to react to this.”

ROC wrote on Twitter: “How unnerving our victories are for some of our colleagues. Yes, we are here, at the Olympics. We have every right. Whether someone likes it or not.

It added: “We will not console you. Forgive those who are weaker. God is their judge and for us – an assistant.”

Asked if he shared Murphy’s doubts, bronze medallist Greenbank said: “It’s obviously a very difficult situation not knowing whether who you are racing against is clean.”

The Russian’s victory ended America’s dominance in the event, which had seen an American claim gold in the men’s 200m backstroke at each of the last six Olympic Games.

Rylov has also won a silver medal in the men’s 4x200m relay in Tokyo.

In this article:Olympics, Sports, Tokyo2021