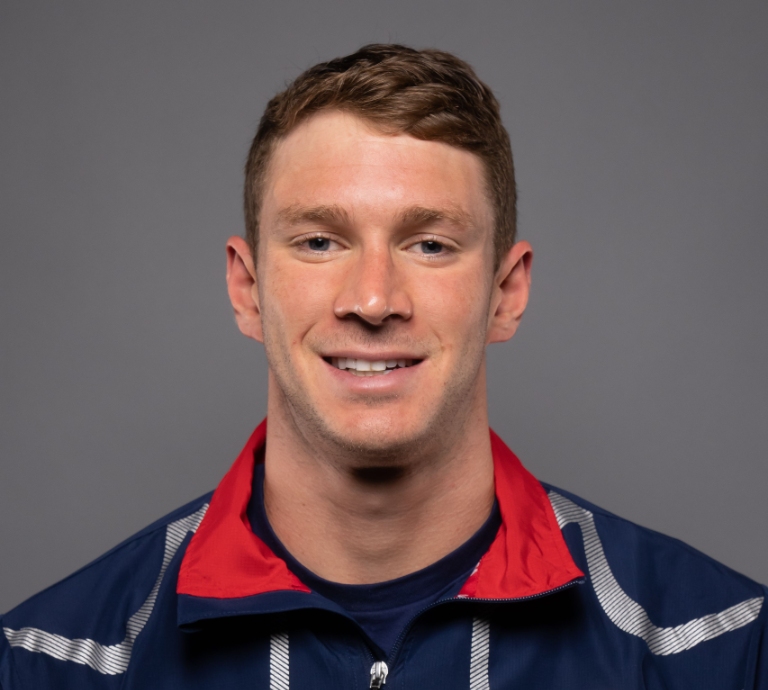 Murphy, age 27, is a world-class American swimmer and currently a member of the Team USA’s national swimming team. A native of Ponte Vedra Beach, Florida,  Murphy arrived on the international scene with a breakout performance at the 2016 Olympic Games in Rio.

Most recently, at the 2022 World Championships in Budapest, Murphy won four medals, which included two gold and two silver. His gold medal races were the men’s 200 meter backstroke (his first world championship title in this race) as well as the 4 x 100 mixed medley relay race. “It is always an incredible honor to compete for Team USA,” he said. “I have a really healthy appreciation for the team. It is really cool to be a part of a team that has such an incredible culture, and my support group around me has helped propel me to a lot of success.”

“I honestly feel really good about how we approached last season,” he admitted. “It is good leaving a season satisfied with what you learned but also intensely motivated for the upcoming challenges. I am fired up for these next few years and for the push for 2024.”

At the Rio Olympic Games, he captured three gold medals for Team USA, including sweeping the 100 and 200 backstroke while setting a world record in the 100 meter backstroke (with a time of 51.85 seconds). A graduate of the Haas School of Business at UC Berkeley where he helped the Golden Bears capture the 2014 National Championship and accomplished a rare feat in winning both the 100 and 200 backstroke races in four straight national championships.

A mentor to many young swimmers in the sport, Murphy was elected to serve as team captain at both the 2021 Olympics in Tokyo and the recent 2022 World Championships in Budapest. With six Olympic medals and multiple World Championship medals, he continues to train with the professional group at the University of California, Berkeley. “It was really cool and incredible to be a captain again and be in a position to positively impact the team culture,” he said.

“I am constantly learning things as a leader, and how to be a better mentor, and how to give back to the sport and the community,” he added.

‘The Now Me: Beach Mode’

He recently joined forces with Dupixent for “The Now Me: Beach Mode” campaign that launched in August, in an effort to help spread awareness and their story on living with a chronic disease: moderate-to-severe atopic dermatitis (AD). “This campaign is really cool,” he admitted. “We are encouraging people to learn more and we hope to inspire them to be comfortable in their own skin.”

“My confidence is at a point now where I can speak about some of the things that I’ve dealt with and hopefully, inspire other people to be more comfortable with themselves,” he added.

Murphy lives with this debilitating disease, which can be triggered by the sun, stress, sweat, sand, and saltwater at the beach and causes intense itching and painful skin lesions across the body. “This is a really natural campaign for me, I grew up in Florida and going to the beach and the river all the time. I was near water every single day and so many of my best experiences in life have come in and around the water,” he explained.

He started experiencing moderate-to-severe atopic dermatitis at a young age while growing up in Chicago and Jacksonville, Florida. Now, he often experiences flare-ups on his legs, calves, and knees ahead of big races, which can burn under the water and be distracting, making it even more difficult for him to focus on his goals in and out of the pool. “I feel that this campaign is going to have a really positive impact,” he said.

Murphy is raising awareness about the disease and the impact it can have on those who live with it via “The Now Me: Beach Mode,” a program in partnership with Dupixent to educate about the realities and challenges people with moderate-to-severe atopic dermatitis face. “I like sharing my stories to help people and really inspire confidence in people with moderate and severe eczema,” he said.

On the title of the current chapter of his life, Murphy said, “Excitement and hungry for success.” “I am excited and fired up for the next few years, especially trying to make another Olympic team and to win more medals for Team USA. I feel really confident about that. I just feel good about life,” he said.

He continues to serve as a brand ambassador for the Goldfish Swim School. “Goldfish is great,” he exclaimed. “It is awesome to help give back to a sport that has given me so much and has helped people learn to swim and feel confident around the water. It all ends up coming back to my love for the water.”

In his personal life, he proposed to his long-time girlfriend Bridget back on May 15, 2022, and he is looking forward to their upcoming wedding. “Honestly, I am getting married at a beach next September,” he said. “The beach has been a huge part of my life, and we will have those photos around our house forever.”

“The wedding will be great. There are a lot of things to plan,” he foreshadowed. “It is going to be an awesome weekend.”

Murphy had great words about Nathan Adrian, who has served as a Team USA. “Nathan is somebody I have learned a ton from. He is incredible,” Murphy said.

“I’ve learned a lot from Nathan on the leadership side and as an athlete, and it is nice to add my own flavor to that. Nathan is so consistent year after year. As a team leader, he is very thoughtful,” Murphy added.

Waffles or pancakes? Pancakes
Flying or driving? Driving
City living or country living? City living
Summer or winter? Summer, the beach is where it’s at
Library or museum? Library
Bath or shower? Shower
Pepsi or Coke? Neither
Texting or calling? Calling
Half-full or half-empty? Half-full
Curly fries or normal fries? Curly fries
Skydiving or scuba diving? Scuba diving
Indoor pool or outdoor pool? Outdoor pool
Tea or coffee? Coffee
Rain or snow? Rain, growing up in Florida, the rain on the beach is awesome
Singing or dancing? Dancing
Burgers or tacos? Burgers
Long course or short course? Long course
Money or fame? Fame mostly because with fame you are able to connect with people more and create a positive influence