On competing for Team Iron, he said, “It was amazing, this was my second season with them. I was familiar with the environment and the format of the races. This year, they assigned me as a co-captain with Katinka Hosszu. I wanted to take full responsibility for that and step into that role and try to engage as much as possible. I wanted to push each and every individual since we had a pretty diverse team. It was just amazing, especially in this difficult period in time. It was a breath of fresh air.”

Glinta had kind words about working with General Manager Dorina Szekeres and co-captain Katinka Hosszu. “It was awesome working with both of them,” he said. “They were kind and respectful towards me. I came here focused on doing my job and doing my best. We got along really well on a personal level, and we had cool conversations about our cultures.”

“I remember looking up to Katinka from all the World Champions and Olympic Games. She was a really good role model for us, we got a lot of inspiration from her,” he added.

“The ISL is a really cool overall competition and the concept. The fans and the swimmers all gain from it. You can feel the energy that is going on in each team box, and the energy of the athletes that are racing and what they represent,” he said.

He shared his excitement for the upcoming Olympic Games in Tokyo in the summer of 2021. “I have been excited since the beginning of last year since I made the FINA Cup. I am already qualified because we don’t have trials in Romania. We are very few swimmers,” he said.

“I have been excited for the Olympics for a long time ago and I have been training in full swing,” he added. “Even right now I am excited for Tokyo and I really that the Olympic Games will happen one way or another. I hope they will find a way for them to go on with the Olympic Games. The ISL was the only high-profile international competition this year and that was good preparation and a good checkpoint for everyone, including me.”

He revealed that he had tested positive for COVID after he arrived in the ISL bubble so he had to quarantine for two weeks. “The first test I did there came positive, so I had to stay isolated for two weeks and two days until I tested negative,” he said.

“I didn’t want to pass on the virus to anyone since I would feel so guilty about that. The ISL had a great medical protocol in place, so everything was in place and I was taken care of well. Even though I missed the first two matches with Team Iron, I was able to set six new national records for Romania. Overall, it was an amazing competition for me during this Coronavirus period so I was very satisfied with that,” he elaborated.

On his personal favorite stroke, he listed the backstroke. “This is what I train for, and the stroke that I have the best results with,” he said.

He is the former junior world record holder in the men’s 100 meter backstroke (short course), with a time of 50.77 seconds.

Glinta praised Brazilian swimmer Nicholas Santos, age 40, for being an inspiration for Team Iron. “Nicholas is an inspiration for all swimmers, we can all look up to him,” he said. “Nicholas sets the standard high and he is living proof that anything is possible, to perform at such a high level even at his age.”

For young and aspiring swimmers, he said, “For Romanians, where the resources are limited, it is important to believe in yourself and be patient even though the results don’t come at a young age. Many have a breakthrough at the senior stage. As long as you believe in what you are doing and you are confident in improving yourself, that’s the main aspect.”

“I don’t personally focus on comparing myself to the best in the business even though I am racing with them. In practice, I always focus on myself and what I can improve to get better in the many aspects of the race. Personal development plays the principal factor in getting on top of every stage, then you can see improvements in your overall results,” he said.

Glinta also had kind words about Slovenian swimmer Peter John Stevens, who competed for Team Iron last season. “We are really good friends and he is just a cool guy,” he admitted. “I just can’t wait for the next time we see each other so that we can share some stories.”

He defined the word success as “setting little goals and little steps that you can confidently overcome, which will eventually translate into bigger goals.” “These will lead you to the path of more successful results, and they will give you a lot more motivation to set even bigger goals,” he said. 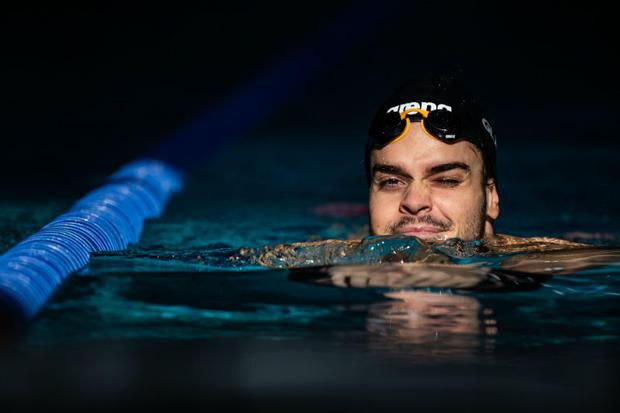