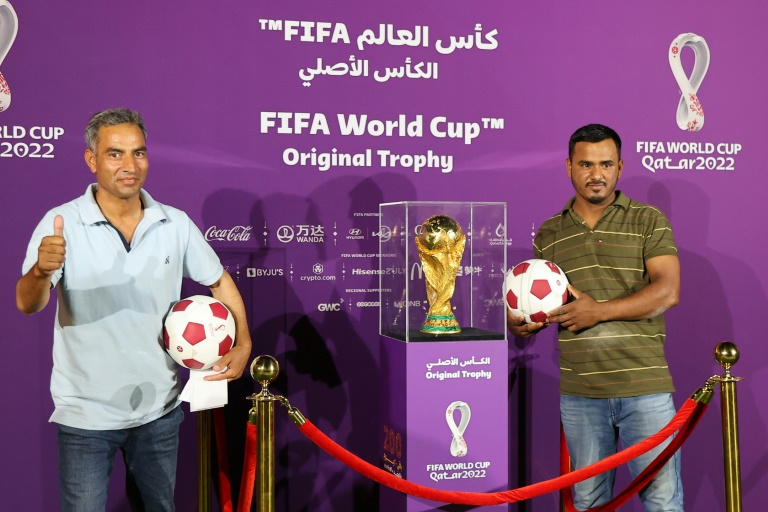 Thousands of migrant labourers, many of whom have worked on Qatar’s new stadiums, have formed long queues to see the World Cup trophy that will be contested in the Gulf state this year.

The price of tickets means that most of those who waited up to two hours for the chance of a selfie next to the gold trophy will not see the games that start November 21.

South Asia has contributed the biggest contingent to the army of labourers that built seven new stadiums and refurbished an eighth for the first World Cup in an Arab country.

Qatar has faced strong criticism over labour rights but insists it has made big changes in recent years, leaving it the most progressive state for foreign workers among the Gulf countries.

For the latest stage of its final display in Qatar before the tournament, the trophy was set up in a car park near Doha’s main cricket stadium in Asian Town.

Each person had about 15 seconds on Friday to snap a picture with the cup that is currently held by France. A Bangladeshi pop group and Indian drummers entertained the waiting hordes.

Azam Rashid, a carpenter who worked on two stadiums, said he was among the many workers who could not afford tickets but was intrigued by the cup.

“The tickets may be too expensive, but Qatar and the World Cup has given me an opportunity,” he said.

“There are long lines, but it will be worth it to see the trophy,” he said.

Some tickets costing 40 riyals ($11) have been reserved for Qatar’s 2.8 million population, most of whom are foreign workers.

Many in the line told AFP, however, that all the cheap tickets had gone and the cost of others was out of range for the mainly male workers earning Qatar’s minimum wage of $275 a month.

“The World Cup is exciting but it is definitely too much for me,” said an administrative worker who gave his name as Tarir.

Another expat, Nasim, said he was more fortunate and obtained some $10 tickets. “Everyone can afford the price I paid,” he said.

But Ahmed Kareem, a construction labourer who said he had been in Qatar for a decade, predicted that most migrants would only watch matches on TV.

“This trophy is a big event for us. It is the closest that most of us will get to the World Cup,” he said.