She will be competing for the Cali Condors in the new International Swimming League (ISL). “It’s very exciting,” she said. “This is the first year that they are doing it, but I hope it will grow into something so incredible for athletes years down the road. To be a part of Cali Condors in itself is really special.”

“Having Jason Lezak as our General Manager is so surreal to me,” she admitted. “I remember watching him at the Olympics, where he was the fastest anchor of all time. I remembered exactly where I was when that happened. Watching Jason was part of history. The fact that I am even communicating with him is very surreal to me.”

“Now, with the International Swimming League, it will help the sport of swimming expand further,” she added.

For Smoliga, winning the gold medal at the 2016 Olympics as part of the women’s 4 × 100 meter medley relay for Team USA was a “great” feeling. “Everything happened so far. It was a whirlwind. I was very grateful to be a part of that preliminary relay and I am hungry for some more. I want to be in the finals relay next time,” she said.

More recently, Smoliga won two gold medals and one bronze medal at the 2019 World Aquatics Championships in Gwangju, South Korea. “I walk away from every meet feeling grateful and thankful,” she said. “Although this was my best showing in a long course meet, I always want more.”

With her gold medal win, Smoliga also broke her own American record in the women’s 50 meter backstroke final at the FINA World Championships in Gwangju with a time of 27.33 seconds

On her motivations, she said, “I reflect on every year when the season is over.” “Ever since my late teens, I set lofty goals and dreams that I wanted to accomplish and those keep me going,” she said. “I feel like I have so much more to accomplish and that I am just getting started.”

Her advice for young and aspiring swimmers is to “never give up.” “No matter what anybody tells you, believe in yourself and love yourself and keep pushing,” she said.

Smoliga will be hosting the “Back 2 Back Swim Camp” this month with fellow backstroker Jacob Pebley on September 7 to 8, 2019 in San Diego, California, and on September 14 to 15, 2019 in Washington, DC. “I am really excited to see how it will go,” she said. “It will be fun.”

On the impact of technology on the sport of swimming, she said, “The craziest thing that I could remember is going to Olympic Trials in 2008, and in Omaha, they have this arena of endless jacuzzi pools that people train, a Speedo hut, and a TYR hut. I remember they had a booth where they explained the technicality of a Speedo suit.”

“At the end of the day, the suit won’t make the athlete. It is all about hard work,” she added.

For recovery purposes, she shared that she uses a Theragun massager. “It’s a Hypervolt gun and I just love it,” she said.

Smoliga praised fellow American swimmer Michael Andrew for growing the sport of swimming with his YouTube channel. “This is something that hasn’t been seen before,” she said, and she also complimented Andrew for training Ultra Short Race Pace Training (USRPT). “Michael is the only swimmer doing that right now. It is intense and it works for him,” she said. “He is really finding new ways to be great and he is so great.”

She had nothing but the nicest remarks about three-time Olympic gold medalist Josh Davis and his Breakout Swim Clinic. “Although I haven’t done a clinic with him in two years, my experience with him was so great. He is so kind and very welcoming. I had a really pleasant experience with him. Josh has a really good soul. I did a clinic with Josh in Mexico. It was so beautiful when we went there,” she said. 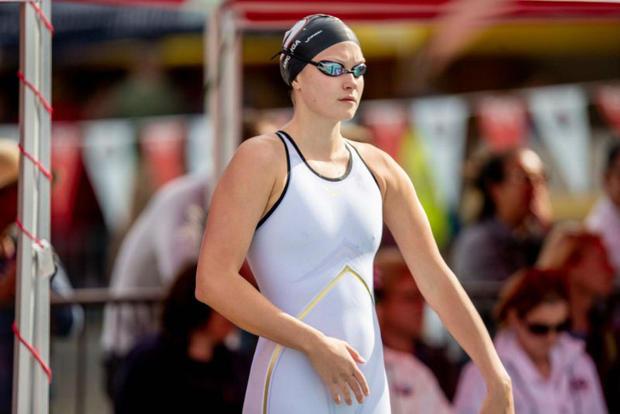 On the title of the current chapter of her life, the backstroke star responded, “Gratitude.” “Every day, I feel like I am just getting started, and I am grateful every day that I get to keep doing this. I want to stay grateful,” she said.

She defined the word success as being “happy and feeling satisfied with the effort that you have put forth in something that you are passionate about.”

For her fans and supporters, she said, “I love them. They are so supportive, they show me so much love and they are funny. They really put a smile on my face. My fans are just the best fans in the world.”

Smoliga concluded, “Go Cali Condors. I am so excited.”