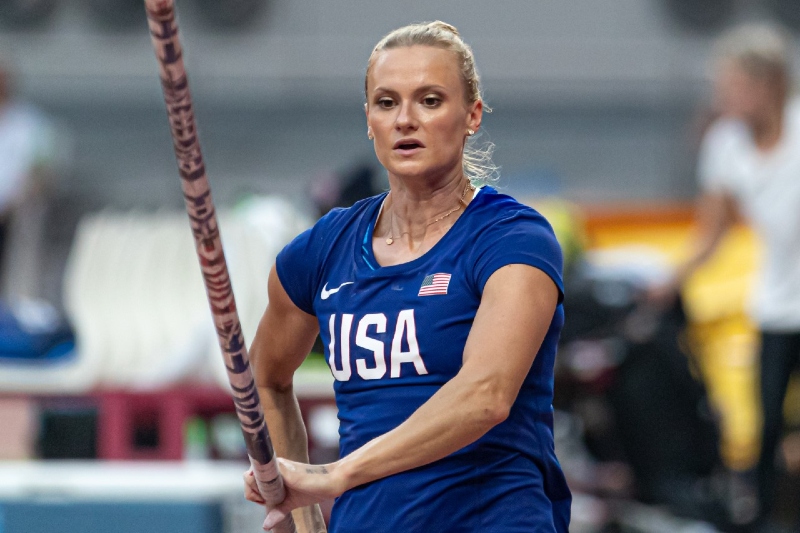 American pole vaulter Katie Nageotte is the new “Queen of Pole Vault.” She won the Olympic gold medal in the women’s pole vault competition at the Tokyo Summer Olympic Games and she chatted with Digital Journal’s Markos Papadatos.

Nageotte was able to clear 4.90 meters on her second attempt, which was enough to secure the gold medal for Team USA. “That felt pretty amazing,” she admitted. “I am exhausted, I feel like I have been going constantly but I wouldn’t want it any other way. It has been a whirlwind,” she said with a sweet laugh.

For Nageotte, hearing the national anthem at the top podium was an overwhelming moment. “I was already tearing up before I even went out there. It was very emotional but that’s where it all hits you and it was all worth it,” she said.

She was happy to celebrate that milestone with her coach Brad Walker. “I went up and hugged him since he and I went through so much together over the last four years together,” she said. “Our relationship started as coach-athlete, and now I feel that we are more good friends, but it’s still a coach-athlete relationship when we are competing. Brad has changed me completely as a person and as a pole vaulter. The real reason I won was because of him.”

Nageotte paid a moving tribute to her late father writing the word “Dad” on her sneakers. “I have been doing that since high school and college. I had been thinking about him on the podium and the whole time really,” she said.

Reflecting on the process

When asked what she learned about herself through that process, she said, “This whole year was about overcoming obstacles, and this meet was no exception. There were so many things that happened this year to me where I had to roll with the punches.”

“Also, the competition started a little rough so I was dealing with things that weren’t going so well, but I bounced back and refocused, and controlled what I could control. I learned that I was tougher than what I gave myself credit for, and that was all thanks to Brad [Walker], who taught me how to deal with those things,” she elaborated.

On the title of the current chapter of her life, she said, “Victory.” “I worked so hard and just to know that it all came together and it was worth it was a relief. So many people worked really hard and wanted it just as bad as I did, so to know that I was good enough is just pretty amazing,” she explained.

Regarding her plans for the future, she said, “This year, I am going to compete at the Diamond League finals in Zurich and that will be in the middle of September, and that’s my last and only meet left this year. Then, I will take six weeks off, which will be my longest off-season ever but I need it. Next year, the World Championships will be in the United States at Hayward Field in Eugene, Oregon, and then, I will be preparing for Paris 2024, which is only in three years so I would like to defend my title.”

“Pole vault is very stressful for me,” she admitted. “It’s not a stress relief, it causes stress in my life. When I decide to have a family, I will be done with the sport. I have so much respect for the women that do pole vault and have a family.”

Nageotte defined the word success as “working really hard and seeing the results.” “Success is more than the medal, it’s the process, the work put in, and the journey. It’s a combination of the failures, the highs, the lows, and everything.”

For her fans and supporters, she concluded, “I can’t say ‘thank you’ enough. I felt their support for years even before this year. Just going home and doing the meet and greet was so unbelievable and humbling. I’m just a girl that loves this sport, and I am so proud to be from the Cleveland area of Ohio.”