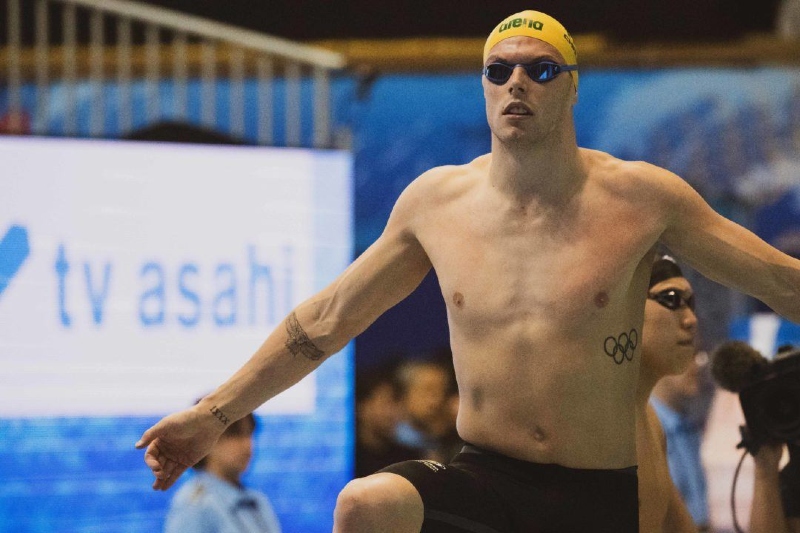 Australian swimming superstar Kyle Chalmers chatted with Digital Journal’s Markos Papadatos about his experience at the Tokyo Olympic Games, the upcoming International Swimming League (ISL) Season 3 where he is back with the London Roar, being an ambassador VACSWIM, and he furnished his definition of success.

Jesse Owens, the late but great track and field legend, once said: “We all have dreams. But in order to make dreams come into reality, it takes an awful lot of determination, dedication, self-discipline, and effort.” Kyle Chalmers is an influential athlete that embodies this timeless quotation.

At the Tokyo Summer Olympic Games, Chalmers took home three Olympic medals for Australia (two bronze and a silver). He finished in second place in the men’s 100 meter freestyle, as well as in third place in 4×100 meter freestyle and the 4×200 meter freestyle relay races respectively. “It felt good,” he said about winning these medals. “It was awesome and very special,” he added.

“The last five years have been a long journey,” he admitted. “Going into Rio de Janeiro, I was the young kid that had to work overly hard to be there, in a way. This time around, I had to do five years of serious hard work to get there. I learned a lot about myself and what I need to do to perform at the highest level. I feel like I’ve learned so much more from Tokyo, and I think I can take that into Paris, which I think will be exciting for me.”

He complimented the good rivalry that exists between him and Caeleb Dressel. “We are great mates,” he said. “When we push each other every step of the way, we get the best out of each other. I hope the rivalry continues on for a few more years.”

Chalmers was extremely pleased with the way Australia performed in the swimming competitions at the Tokyo Summer Olympic Games. “It was good to be a part of the team. The team did far better than I thought they would,” he said.

Speaking of excitement, he is looking forward to competing in ISL Season 3 with the London Roar swimming team, with Rob Woodhouse as his team’s General Manager. “I am the captain of the London Roar so I am excited to see my teammates, and hopefully, we will get a win this year,” he said.

On his daily motivations as a swimmer, Chalmers said, “I am motivated to win, really. Winning gold medals obviously motivates me a lot. I am very goal-driven, I have short-term goals, long-term goals, I do it all.”

Chalmers revealed that the greatest lesson that swimming has ever taught him is that “hard work pays off.” “I’ve had to work very hard to be where I am now,” he said. “Swimming keeps you accountable to yourself, you need to be on a schedule and you need to work hard day in and day out. Swimming has taught me some really important life lessons. It will set me up for the future because I am very structured thanks to all the hard work I’ve put into my swimming.”

He listed the freestyle as his personal favorite stroke in the sport of swimming though he started off as a butterflier. “For the time being, I stick to freestyle because the butterfly is not good for my shoulder,” Chalmers said.

Looking back and reflecting in a rearview mirror over the last decade, he noted that he sees “a lot of hard work,” as well as “a lot of ups and downs and challenges” that he faced and overcame. “I have a career that I am definitely proud of but not content with,” he said. “I know that I’ve got more to give to this career.”

When asked if he sees a silver lining in the COVID-19 pandemic/quarantine, he responded, “I hope it will come to an end pretty soon. We will see how the world is going.”

On being a swimmer in the digital age, he remarked, “The digital age makes me a better athlete. Without technology, I wouldn’t be where I am at today. We probably have the best technology in Australia so I feel pretty lucky to be using that every single day of the week.”

Kyle Chalmers: A man of perseverance and resilience

On his career-defining moments, he acknowledged that injuries and setbacks have made him more resilient and determined to get back to the top. “I had shoulder surgery in December and I came back from that this year,” he said.

“‘I’ve had to work pretty hard to fight to get back to where I was and swim personal best times again. That defined me since it allowed me to adapt to that situation, and still have the confidence and belief in myself to get the job done,” he elaborated.

“I keep finding ways to go through the wars,” he added. “It’s good though because it gives me something to work towards.”

On the title of the current chapter of his life, he said, “The beginning.” “Hopefully, this is only still the beginning,” he admitted. “I hope I am only in the third or fourth chapter, and I still have ten or eleven more chapters to go. I feel like I am just getting started. I am only 23 years old, and I am very motivated for Paris. The best is yet to come.”

For Chalmers, swimming is not only a sport but a life skill, and he has a passion for water safety and drowning prevention. “In Australia, I am an ambassador for VACSWIM, which teaches kids water safety while they are on vacation,” he said. “I’ve been involved with them the past couple of years now, and I enjoy being a part of that, for sure.”

VACSWIM is a program that can help prevent drownings and encourage kids to get out, safely and have fun in the water. It is a week-long aquatic safety program (not a learn to swim program) that aims to teach children vital water safety and survival techniques that could save lives this summer including first aid, entering and exiting the water correctly, surf and sun safety, and what a child can do if they find themselves in trouble. To learn more about VACSWIM, check out its official homepage.

In his spare time, Chalmers enjoys his extensive reptile collection (consisting of a pet crocodile and pythons and lots of different lizards), as well as playing video games, doing photography, and spending it with friends and family.

He defined the word success as “being able to look back on my swimming career and be happy with what I have achieved.” “I’ve got a lot of hard work to get to that point so I think success would be having a successful career,” he said.

For his fans and supporters, Chalmers expressed his appreciation. “I am so grateful for the fans,” he said. “Obviously, I have Instagram so I get fan messages regularly. I do read articles and comments at the bottom of articles. We swim to put on a show for the fans, so I couldn’t do it without their love and support.”

Kyle Chalmers’ life story (in and out of the pool) is an inspiration for us all, and the best part is that it’s only just begun.