San Francisco is in the midst of one of the biggest economic booms in its storied 240-year history. Construction cranes crowd the skyline as office towers and luxury residences soar ever higher, just like rents ($5,000 median for a two-bedroom apartment) and home prices ($1.1 million median). But the City by the Bay also suffers from one of the worst wealth gaps in the nation; in fact, income inequality is on par with developing nations like Uganda and Guatemala.

The latest tech boom has left plenty of people behind, and many of them end up living on the city’s streets. According to city figures, which are likely on the low side, there were 6,686 homeless residents of San Francisco in 2015, a 7 percent increase from 10 years ago—despite the incredible wealth generated over the course of the decade. 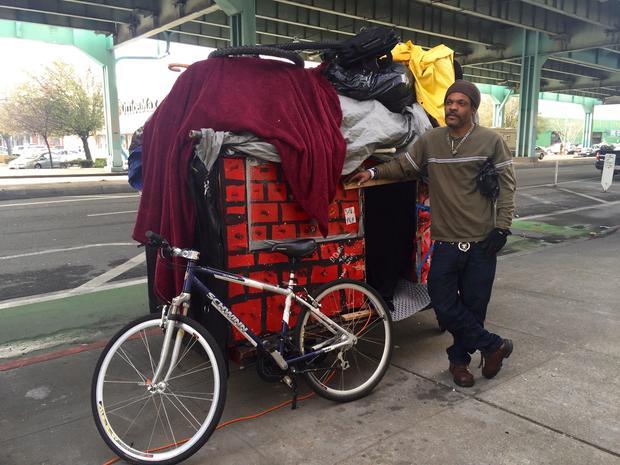 Tent encampments have become as ubiquitous as tech startups and food trucks. On 13th Street, just steps from where techies and hipsters lunch on $14 lobster rolls at the food truck lot, dozens of tents and makeshift shacks line the sidewalks on both sides under elevated highway 101. Don Gordon, a 45-year-old native San Franciscan, lives in one of the more colorful shacks on 13th Street. Gordon says he has definitely noticed an increase in city sweeps as the Super Bowl approaches, and that he has been moved by police and Department of Public Works (DPW) employees on multiple occasions.

“It’s musical chairs,” he added. “They do it all the time. Wind, rain, summer, winter—it’s like the Postal Service.” When asked where city officials want him to go, Gordon said he “heard something about Pier 80, but it looks like a concentration camp down there.”

Across the street, 38-year-old Shannon Pleskac, who has been living on San Francisco streets for five years with her partner Nathaniel Alleger, says police keep moving her “further and further down” the street. “When is it going to stop?” she wonders.

“They do it all the time,” said Pleskac. “Right now, it’s mainly for the Super Bowl.” Other homeless people report being moved from Fisherman’s Wharf, a popular tourist area, as well as the area around Justin Herman Plaza, site of Super Bowl City fan festivities.

“The high cost of living [means] we can’t get an apartment,” said Pleskac when asked where she is supposed to go. “There’s no room in the shelters, there’s no SROs (single room occupancy hotels). There is no room.”

“The mayor promised 1,500 shelter beds, but there’s only been 75 opened,” said Alleger, “and those are kind of iffy to get into.”

A short drive away in the gritty Tenderloin neighborhood, the offices of the Coalition on Homelessness sit ironically adjacent to the San Francisco Housing Authority headquarters. Coalition Executive Director Jennifer Friedenbach noted that San Francisco has the largest number of anti-homeless laws of any city in California and “a huge amount of criminalization that happens regularly.”

“Last year, 11,000 people got citations,” said Friedenbach. “When they can’t afford to pay them, they get warrants and end up going to jail just for sleeping and resting. And they’re kicked off the housing list for warrants, which further perpetuates homelessness.”

Pleskac said she’s gotten such citations, and that DPW “will come and take all of your stuff away.”

“They just throw it away,” she said.

“They come in 20 or 30 deep, in three or four trucks,” said Gordon. “They take or destroy your property right there on the spot.”

As Gordon was being interviewed, several DPW trucks passed by, with workers hopping out of one of them to grab bags of what appeared to be trash lying nearby on the sidewalk.

“I’ve been cited for the littlest things, like spitting on the sidewalk,” said Robert Bowman, leaning out from under a blue tarp draped over his makeshift shelter. “I’ve also been moved three times. Last time was at 4:00 a.m. during El Niño,” the relentless series of intense winter storms that have drenched much of California over the past month. Bowman said his belongings have also been confiscated, never to be returned.

“My whole life was in that tent,” he lamented.

Despite strong anecdotal evidence that homeless people are being moved and removed ahead of the Super Bowl, city leaders are denying that such sweeps are taking place. 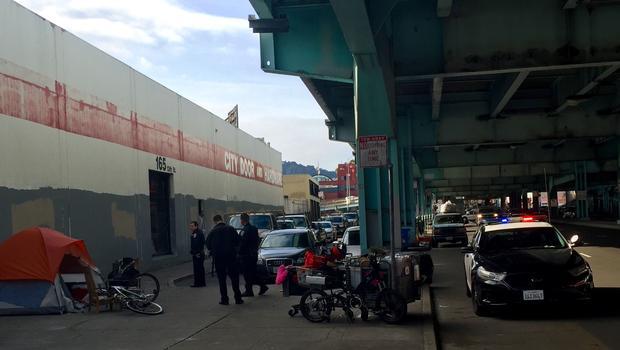 San Francisco police have been asking homeless residents encamped throughout the city to move as Super Bowl 50 approaches.
Brett Wilkins

The San Francisco Police Department referred Digital Journal to Mayor Ed Lee’s spokesperson for comment. Repeated attempts to contact Lee or his staff for clarification were answered by the mayor’s press office with a link to a press release detailing the city’s plan to house the homeless during El Niño storms. The release did not mention sweeps or the Super Bowl. But clues can be found in an August 2015 statement by Mayor Lee in which he told homeless people that “you are going to have to leave the streets.”

“I have to have an alternative; otherwise we are just moving them from one area to another,” the mayor added, but that is what appears to be happening.

Meanwhile, San Francisco taxpayers will shell out some $5 million for Super Bowl-related events in the city. District 6 Supervisor (councilwoman) Jane Kim, who represents the homeless-heavy Tenderloin, Mid-Market/Civic Center and South of Market districts, is outraged that the city is spending so much money to host a sporting event and is demanding that the National Football League (NFL), not city taxpayers, foot the bill.

“This is just a further example of the inequity in our city,” Kim told Digital Journal. “[We’re] removing the poorest people out for this party that we’re subsidizing for some of the wealthiest people in the world.”

“That $5 million could be better used for housing people,” added Friedenbach, who lamented that some city leaders seem more concerned about “cleaning up” the city than with caring for its most vulnerable residents. Friedenbach pointed to a letter from District 8 Supervisor Scott Wiener to city leaders calling for the “humane” relocation of the homeless, a memo that she said “didn’t have any viable solutions.”

In a phone interview with Digital Journal, Wiener countered that his letter “has absolutely nothing to do with the Super Bowl.”

“It’s about longer-term approaches to addressing an unacceptable situation, which is the proliferation of tents on our sidewalks and public spaces,” explained Wiener. “I am not advocating to immediately go out and remove all the tents without giving people options. What I am advocating is that we need to expand the shelter system and the number of navigation centers. It is not acceptable to have tents as housing policy.”

“We’re looking to get people into shelters, into housing,” added Wiener. “It is neither humane nor progressive to allow people to deteriorate and die on our streets in unsanitary conditions. That is cruel and inhumane.”

Back on 13th Street, a dozen or so activists from WeSearch Policy Group, POOR Magazine and Deecolonize Academy gathered under a graying sky to protest the increased targeting of homeless by city officials. 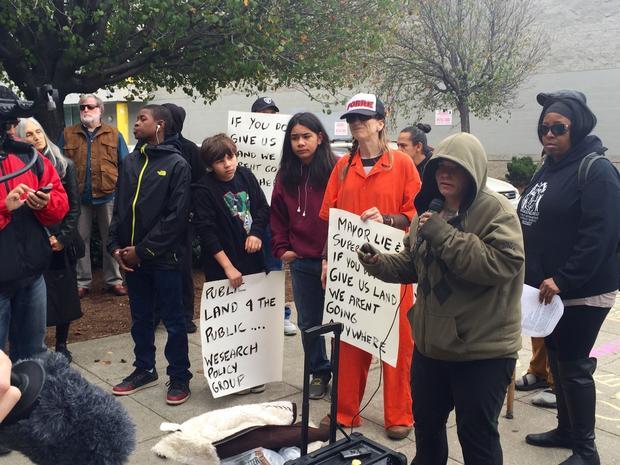 Advocates and activists stage a small demonstration near one of San Francisco’s largest concentration of homeless tents. Among the speakers was 13-year-old Kimo Umu (center, maroon hoodie), who was homeless as a younger child.
Brett Wilkins

“It’s not a crime to be homeless,” asserted 13-year-old Kimo Umu, who lived on the streets for a period some six years ago. “We all live on this planet together. We should all get equal rights. We are all humans.”

But a few steps away, in front of a long row of tents pitched precariously on the sidewalk, Pleskac says she feels like “we’re not human.”

Across the street, Gordon had a message for those who might prefer to ignore the city’s homeless crisis.