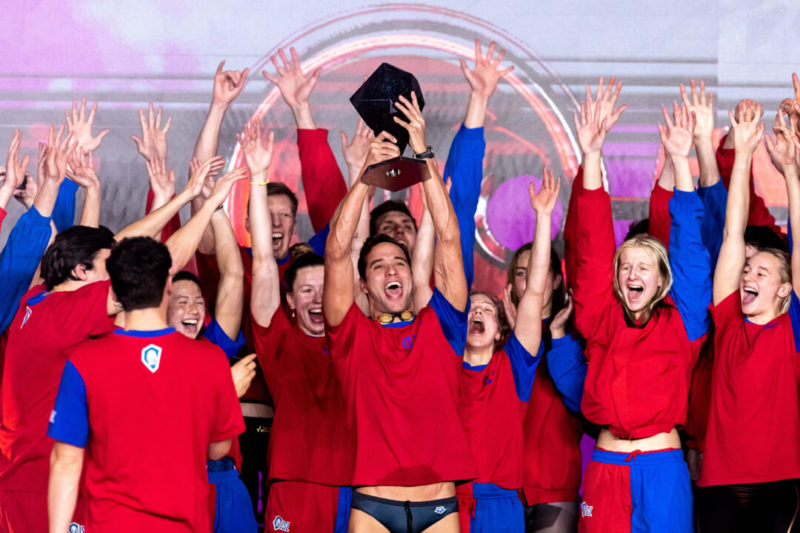 Le Clos was thrilled to win ISL Season 3 with the Energy Stardard swimming team, where he serves as a co-captain, along with Sarah Sjöström. This marked their team’s second nonconsecutive ISL win. James Gibson, MBE was their General Manager, and Tom Rushton served as the Head Coach. “That was amazing,” he said. “It has been a hard year for me (with lots of injuries and things that happened to me outside of the pool) and my journey was a bit of a roller coaster but the win was the silver lining. James is a great leader and he managed the team well, and Tom made some tough calls in the end. ISL was my first win in 2021.”

“We had such a diverse team and we all came together, and we had a great Team Manager Shila Sheth. We all had great energy about ourselves. The most important thing for me was the team and how we got over the edge,” he added. “I give full credit to everyone on the team from the staff to the athletes. The chemistry that our team had was unbelievable. Honestly, it was a team effort”

Sarah Sjöström was named MVP of ISL Season 3. “That was crazy and unbelievable,” he exclaimed. “I love the ISL and I love being a part of it. I was there injured and I competed for my team. I left my home in South Africa and I was there supporting my team,” he said.

He praised American swimmers Caeleb Dressel, Michael Andrew, and Tom Shields for being “great guys.” “Tom Shields is awesome, he is an amazing guy. I love him and his wife. I wish him all the best, but obviously, in competitive racing, I hope I can beat him this week at the Short Course Worlds. If not, I would be happy for Tom to be the champion,” he said.

On the title of the current chapter of his life, Le Clos said, “The Road to Redemption.” “I can’t promise that I will win a gold medal again but I will die trying, and I will make sure I am in a position to be successful again,” he said.

He is looking forward to racing at the 2021 FINA World Swimming Championships (Short Course Worlds), which are held in Abu Dhabi from December 16 to 21. “The facilities are great here, and if I can leave this competition with two medals, I will be very happy,” he said. “If I land medals, I will be very grateful. My dad has a beautiful saying: we don’t cry for losing, we cry for winning.”

Five years ago, Le Clos had broken the world record in the men’s 100 meter butterfly at the Windsor Short Course Worlds with a time of 48.08 seconds. “It has been a good journey,” he admitted. “I hope to someday reclaim that world record again.”

He shared that the Chad le Clos Foundation is going well. “We raised quite a bit of money and we’ve started implementing that in Johannesburg and Cape Town,” he said. “We have some big things lined up for it.”

If he were to write, direct, and produce his own short film, he shared that it would be on life and family. “I would call it the ‘African Lion’,” he said. “Adam Peaty took that from me,” he joked.

For his fans, he concluded, “As always, I am very grateful. I started this journey 12 years ago and I couldn’t have done it without their support. I feel so much love from them globally. Money comes and goes but I have so much pride when I win for my people and the people that support me. Nothing is better than that, and nothing makes me happier in the whole world.”