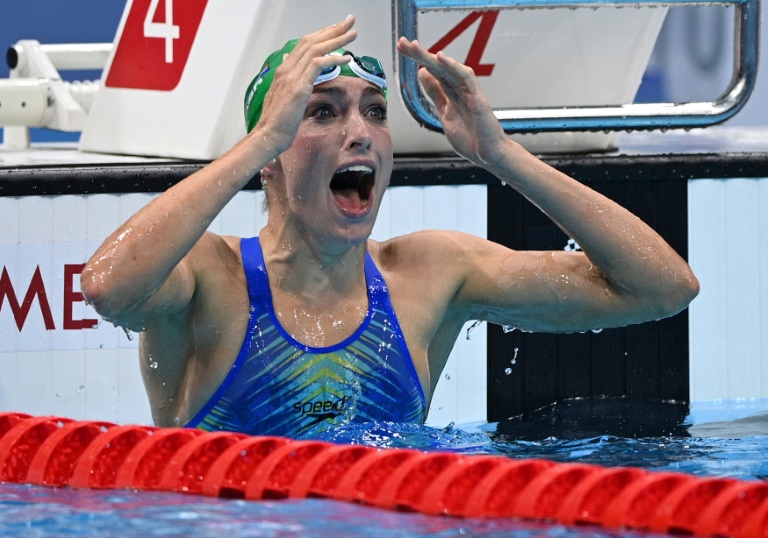 Jamaican sprint queen Shelly-Ann Fraser-Pryce made an impressive entrance at the Tokyo Olympics on Friday as South Africa’s Tatjana Schoenmaker smashed a long-standing world record in the pool.

But the shadow of coronavirus hung over the start of the athletics programme with the Australian team saying three of its members would remain isolated from the rest of the squad “as a precautionary measure” after a scare.

As competition got under way without spectators in the 68,000-capacity Olympic Stadium because of virus restrictions, Fraser-Pryce successfully launched her bid to become the first woman to win an individual Olympic athletics event three times in the 100m heats.

The Jamaican, champion in 2008 and 2012, shut down with 20 metres remaining and strided over the line for a comfortable victory in 10.84sec.

One of her rivals, the Ivory Coast’s Marie-Josee Ta Lou, blasted to an African record of 10.78sec and reigning champion Elaine Thompson-Herah of Jamaica recorded 10.82sec on what appears to be a fast track.

The semi-finals and final of that event take place on Saturday evening.

World record-holder Karsten Warholm of Norway strolled to victory in his heat of the 400m hurdles, an event that could be one of the highlights.

“It was nice to get out on the track again,” said Warholm. “I’ve been here for two weeks already, I’m starting to get bored so it was very nice to get around.”

Two men who could push him close, the Qatari Abderrahman Samba and Rai Benjamin of the USA, also eased through to the semi-finals.

Samba said he felt the absence of spectators: “It was really, really difficult. I really missed the crowd.”

In the evening session, a new champion will be crowned in the men’s 10,000m, after Britain’s winner from 2012 and 2016 Mo Farah failed to qualify for the Games.

In the pool, Schoenmaker was overjoyed after becoming the first South African woman to win an Olympic swimming gold for 25 years as she obliterated the eight-year-old world record in the 200m breaststroke, timing 2min 18.95sec.

Australia’s Emma McKeon claimed her fourth medal in Tokyo as she blazed to the women’s 100m freestyle title in a new Olympic record of 51.96sec.

Hong Kong’s Siobhan Haughey — one of the surprises of the swimming events — earned another silver medal to add to that from the 200m freestyle.

He ended America’s stranglehold on the 200m event, which had seen them claim gold at each of the last six Olympic Games. Defending champion Ryan Murphy was second.

Meanwhile, the head of the Australian Olympic team said two athletes and a coach had tested negative after a coronavirus scare that had briefly forced the entire athletics team into isolation, but the trio will remain in isolation.

The three were close contacts of US pole vaulter Sam Kendricks, who has been ruled out of the Games after testing positive for Covid-19.

Ian Chesterman, the chef de mission of the Australian Olympic Committee, told a press conference: “They all tested negative which is good. They also confirmed the daily test results which have also been negative and confirmed their test results before they left Australia.”

Coronavirus cases are surging in Japan a week into the Games, with the government set to extend a virus state of emergency in the capital and impose the measure in four more regions.

On Friday, Tokyo 2020 organisers reported 27 new cases related to the event — the highest daily figure yet — although they insist there is nothing to suggest a link between the Games and rising infections in Japan.

In this article:Tokyo Olympics, Tokyo2021