The Cali Condors, with Caeleb Dressel and Olivia Smoliga and the team’s co-captains, were crowned ISL Season 2 champions, and rightfully so. “Caeleb and Olivia are two athletes that I really look up to. I love their outlook on the sport, and they are both great competitors and great people to lead our team. They both did such a great job. They both had the same mentality that I had in college, they always want the best and they both never give up,” she said.

On winning ISL Season 2, she said, “It was amazing. That was one of the reasons I picked the Cali Condors. I knew they were on a mission and I knew that they wanted to win, and I knew they could do it. I was honored to be a part of that.”

Brown had nothing but great words towards General Manager Jason Lezak and Cali Condors Head Coach Jonty Skinner. “Jason is a legend. Working with him was really cool. Jason really stepped up and led us. He inspired us and told us stories about his swimming career, and he gave us advice. Jason took on more of a coaching role, which was really cool,” she said.

“Jonty was really cool as well, he has a more unique style of coaching. I appreciated his distinct style and I definitely learned a lot from him. It was cool to get his perspective in the sport,” she said.

Regarding her takeaways from ISL Season 2, she said, “I definitely did not perform as well as I wanted to in Budapest. I want to contribute to the team more. For me, it’s just learning how to race that often. That really motivated me to get back in, and I will keep training to get even better.”

Brown listed the “freestyle” as her personal favorite stroke. “I just love the freestyle,” she said.

For young and aspiring swimmers, she said, “Never give up. Swimming is a hard sport, you are going to go through ups and downs. It’s always important to write down your goals, continue to work for them, and never give up on yourself. That way, you can achieve what you want to in the sport.”

Regarding the title of the current chapter of her life, she said, “Faith Over Fear.” “Fear has been a big thing this year and I am choosing to put faith over fear,” she said.

Brown defined the word success as “continuing to put my best foot forward each day.” “I always want to be my best self and be kind to those around me every single day,” she said.

For her fans and supporters, she said, “A huge thank you. They really mean a lot to me. They say swimming is an individual sport but it’s so much more than that. Everyone helped contribute to my successes.” 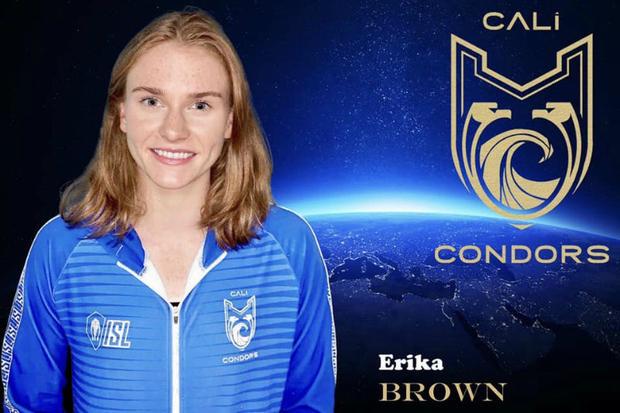