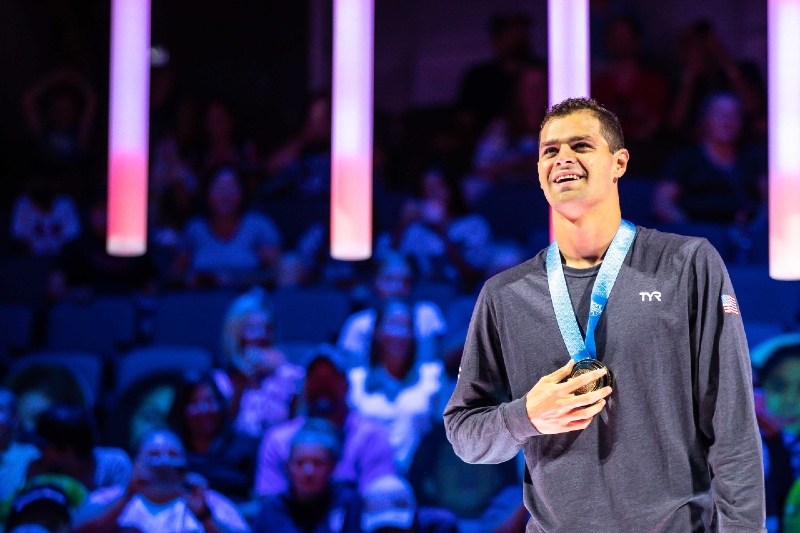 Walt Disney once said: “All our dreams can come true, if we have the courage to pursue them.” Olympian Michael Andrew, 22, is living proof of this wise quotation by the cartoon legend.

“The experience was awesome,” he admitted about winning his first Olympic gold medal as part of the men’s 4 x 100 meter medley relay at the Tokyo Olympic Games. “Although it wasn’t quite the meet that I wanted to have, I think it was the perfect way to end it. I love stepping up on a relay, which is something that I don’t often get to do. I’ve always been a one-man show, but it was an honor to swim for Team USA in the 4 x 100 meter medley relay.”

Not only did Andrew and his teammates (Ryan Murphy, Caeleb Dressel, and Zach Apple) win a gold medal and bested Great Britain, but they obliterated the world record with a time of 3:26.78. “Team USA has never lost that relay since it was in the Olympic program with the exception of the 1980 boycott at the Moscow Games. To keep that streak alive was amazing, and to do it with a world record is even cooler,” Andrew elaborated.

“We went in with a mindset, where we knew what needed to be done to break that world record, and everything just went perfect. This is my first long-course world record, and obviously, my first gold medal. It was incredible and everybody’s splits were great in that relay,” he added.

On the title of the current chapter of his life, Andrew said, “New Developments.” “There are a lot of things that we are working on, which will include launching the Michael Andrew Swim Academy in the next two weeks or so,” he said.

“Coming off the Olympic Games, I am more motivated than ever to be at the top,” he added.

Andrew shared that he is excited about the “Aloha Aquatica” swim clinic that he will be doing with fellow Olympic gold medalist Anthony Ervin from August 9 to 13, 2021. “Anthony and I are so excited,” he said. “It is going to be sweet. We will have a bunch of training sessions, where a lot of them will be beach runs and beach swims. We will also go surfing and hiking with the kids.”

“I will have the opportunity to show the campers my Olympic medal and tell them stories about the Olympic village, and they will also hear about Anthony’s experiences. I am excited to get back into doing clinics,” he added.

Michael Andrew thanks his family for all of their support

Andrew thanked his parents, Peter and Tina Andrew, for all of their guidance and support over the years. “My parents have been with me every step of the way. I wouldn’t be the Olympian that I am today, if it wasn’t for my parents,” he said. “It was really cool having my dad there as an Assistant Coach of the U.S. Olympic swimming team. That was amazing because he got to experience that with me.”

“It was sad that my mother, Tina, and sister, Michaela, were unable to come but they were incredibly supportive at home hosting watch parties and celebrating even though they weren’t there with us,” he added.

Tribute to Ryan Locthe at the U.S. Olympic Trials

At the 2021 Olympic Trials in Omaha, Nebraska, Andrew paid a special tribute to Ryan Lochte, and he opened up about that moment.

“Ryan Lochte is a legend,” Andrewreiterated. “Ryan’s world record stands to this day, and I got to share a heat and a final with him, and what was likely his last attempt at making the Olympics, so it was really cool to just share those moments with him. The fact that Ryan came over to me and told me ‘you got this’ was really cool. Ryan was very supportive of me and my dreams, and I wanted to be able to give back to respect his dominance.”

On his definition of success, Andrew responded, “Being able to love what you do, and do everything you can to the best of your ability, and having the freedom to sit back and let the results be what they are.”