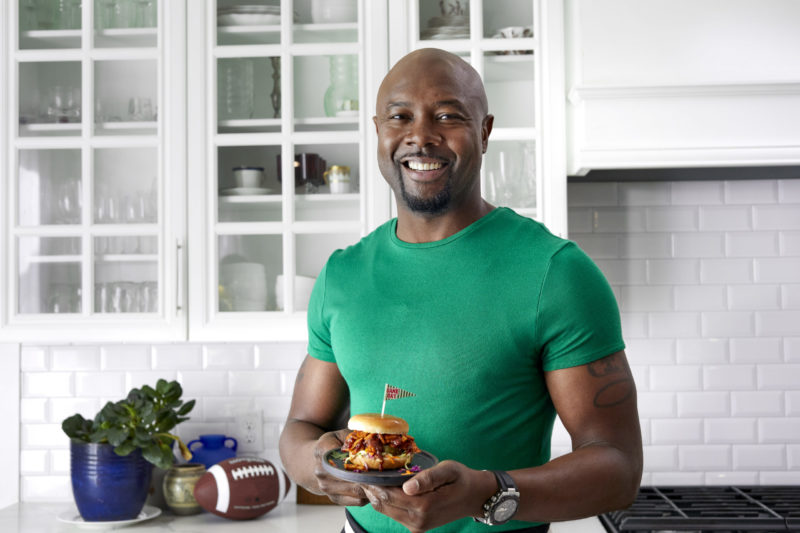 Jackson is a former pro football player who is a fierce competitor both in the kitchen and on the field. Now a food truck owner, private chef, and personal trainer, he is dedicated to making food healthier and absolutely delicious.

In Jackson’s world, there is no need for a “cheat” day, because his good-for-you food is packed with flavor and does not leave you feeling deprived. He joined the Food Network family in 2015 after besting 11 of his fellow finalists on Food Network Star.

In 2016, Jackson joined Iron Chef Alex Guarnaschelli in mentoring eliminated Star hopefuls through a six-week competition on Star Salvation. He is the host of Eddie Jackson’s Game-Day Playbook and Eddie Jackson’s Fitness Playbook on the Food Network.

He partnered with vegetarian and vegan foods innovator Sweet Earth Foods, and they will debut a #Veganuary Swap Sweepstakes and a new collection of meatless game day recipes.

“The partnership has been amazing,” he said. “We are still in the beginning phases of it, kicking off #Veganuary. We are trying to encourage people to swap out their meat options leading up to the Big Game and go for some plant-based products, which they have a lot of, and they are very good.”

“The California residents will have the opportunity for me to come into their house and give them a plant-based catering for the Big Game, and they can meet me, and that will be really cool,” he added.

Regarding his daily motivations, he said, “I am all about trying new things, but I am also big on not doing the same thing all the time. I am not 100 percent vegan, but I do incorporate a lot of vegan and vegetarian products, meals, and recipes in my everyday life.”

On being a chef in the digital age, Jackson said, “It is pretty cool. I never set out to do this but I’ve been around food my entire life. Once I retired from football, food was the next thing for me. I was happy doing my catering with my food truck, but then, life happened and now I am on TV and doing digital content and working with amazing companies like Sweet Earth, so it has been good.”

As people look to incorporate more plant-based proteins in their diets, Sweet Earth and Chef Eddie Jackson are offering something for everyone at the table – especially as game-day tailgating events challenge people’s New Year’s resolutions.

On the title of the current chapter of his life, Jackon said, “Work, work, work.” “I am working as hard as I can and I am staying busy as much as I can,” he explained.

His cookbook, “Game-Day Eats” features tailgate-friendly foods and snacks best served during game days at home. “For me, when I came up with the idea for it, I knew that it had to be related to food and sports. I feel that food and sports go hand in hand. I wanted to highlight two things that I am very passionate about: food and sports, and that’s how ‘Game-Day Eats’ came about.”

Jackson continued, “I wanted to create some ‘Game-Day’ bites that I would want to see on a spread when I am hanging out watching the game. You will see a lot of vegetarian dishes in my cookbook. They will allow you to reset and give your body a break.”

Jackson defined the word success as “achieving whatever your goal is, no matter how small or how big it is.”