After retiring from the sport seven years ago, he made a comeback in September of 2019. “It has been an interesting decision that I didn’t think I would ever do, but here we are,” he said. “Taking the time away from the sport and taking my time to develop strength in my lower back has made things more manageable. I feel stronger now at this point in my life than when I was going into the London Olympics in 2012.

This past March, he did extremely well in the men’s 50 meter freestyle race at the TYR Pro Series in Des Moines, Iowa. “That meet went really well. It was the fourth-fastest time I ever clocked in the 50 meter freestyle, so that was exciting,” he said.

22.25 in the prelim!!! Fun times!!! Been almost 8 years since I got to race @nathangadrian and wouldnt you know it…we were in the same lanes (5 & 7) as that 100 free final in London. Good to race you again buddy. And look who decided to photobomb… hahaha thx @caelebdressel!!! #TeamFINIS #TYRproseries #swimlife #oldmanstrength #thisislife

For Hayden, life in quarantine has been “fine.” “Nothing has really changed for me too much. I just didn’t have access to my gym. Our gym just opened up last week so it has been good,” he said.

He is driven to compete for a spot in the Tokyo Olympic Games next summer. “I didn’t give myself a lot of time to prepare for the Olympics had they happened this year, but this gives me time that I didn’t think I was going to have,” he said.

Hayden shared his excitement to be on the roster for the Toronto Titans in the International Swimming League (ISL), as part of the first Canadian team in the swimming league. Rob Kent serves as the General Manager and co-owner of the team. “I signed with the Toronto Titans so that will give me more competitive racing opportunities,” he said. “I feel a lot of gratitude. We have great athletes on the roster.”

“I am looking forward to the skin races. Those will be fun,” he added.

When it comes to technology in the sport of swimming, he revealed that he is a FORM athlete, which features swim goggles with a smart display (where athletes can see their metrics as they swim). “FORM has supported my comeback,” he said. “These goggles give you feedback and metrics while you are swimming They are easy to use. While I am swimming, I am getting my heart rate stats in my goggles. I’ve been using them a lot more while swimming in the lake.”

Supercharged my tethered swim yesterday with the @formswim goggles coupled with the new @polarglobal OH1 heart rate monitor attachment. How high do you think I got my HR? Swipe to find out! . . . #formie #formgoggles #techwear #swim #swimming #swimtraining #quarantineworkout #covidworkout #roadtotokyo

He listed the freestyle as his personal favorite stroke, though when he was younger, he thought he was going to swim butterfly. “I started winning races first in the butterfly races,” he recalled.

Hayden enjoys doing swim clinics and being a part of the Fitter and Faster Swim Camps. “When the borders open back up, I will be looking forward to those,” he said.

For his fans and supporters, Hayden remarked, “Thank you for believing in me and for all of the support. Thanks to the fans for sticking with me and for continuing to follow me. I have had so many amazing people come and support me on this journey.” 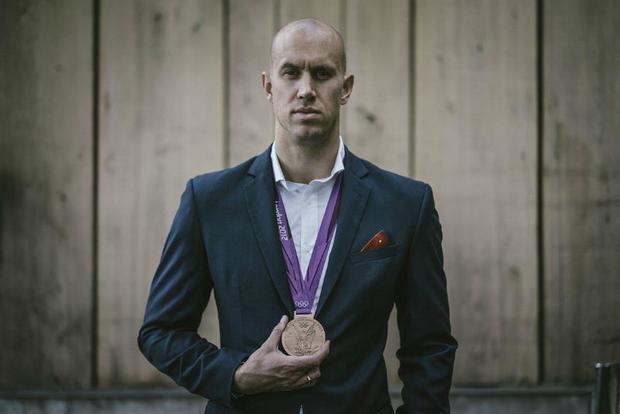