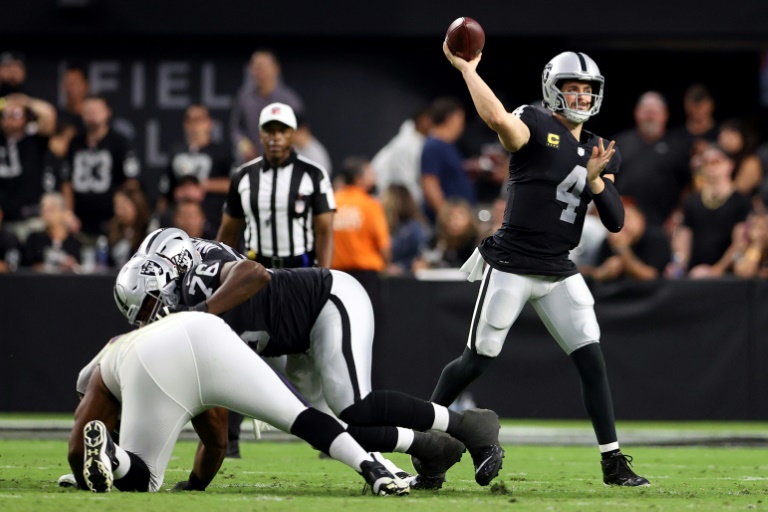 Derek Carr’s 31-yard touchdown pass to Zay Jones lifted the Las Vegas Raiders to a 33-27 overtime win over the Baltimore Ravens in the NFL season opener for both teams on Monday night.

The thrilling Las Vegas victory capped the opening week of the 2021 NFL season and marked the Raiders first regular-season game with fans in attendance at the $1.9 billion state-of-the-art Allegiant Stadium in Las Vegas.

The near-capacity crowd of 61,700 were treated to a dynamic come-from-behind win that included a wild ending in which the Raiders prematurely celebrated a victory before making it official just over three minutes later in overtime.

“I am thankful we won because going to sleep tonight and losing that one would have hurt,” said quarterback Carr.

Carr lofted the ball over the Ravens’ defence with 3:38 left in the extra session to a wide open Jones who waltzed into the end zone to end the marathon contest.

The Raiders squandered their first possession of overtime after winning the coin toss. They appeared to have won the game and celebrated on the field after Carr hit Bryan Edwards with a 33-yard pass down the sideline that was ruled a touchdown by the officials.

But after a video review, the call was changed because Edwards’ knee hit the ground before he reached across the goal line with the ball in his outstretched hand.

On the next play, Carr was stopped on a quarterback sneak attempt. Raiders tackle Alex Leatherwood was also slapped with a five-yard false start penalty. Then Carr’s attempted pass into the end zone was deflected and intercepted by Anthony Averett.

“I am really proud of the character they showed,” Raiders coach Jon Gruden said. “If you can come back and find a way to win against a team like that, then that is impressive.”

Carr, who completed 34-of-56 passes for 435 yards and two touchdowns and an interception, said the twists and turns had a familiar feel to it.

“It reminded me of my career so far,” Carr said. “But the only thing matters is that score, so I am glad we won.”

Ravens quarterback Lamar Jackson completed 19-of-30 passes for 235 yards and a touchdown but had two fumbles. He also rushed for 86 yards on 12 carries.