The next time you’re browsing a website, your scrolling, clicking and reading might get caught on video. An 18-year-old programmer has a new tool that could be every Web developer’s dream, and every privacy advocate’s worst nightmare.

Digital Journal — Joshua Gross hasn’t slept. Almost 16 hours ago, a user mentioned his site on Digg.com and he’s been up all night trying to keep his site live while hoards of users hit it at once, eager to learn about his unique business idea.

The 18-year-old programmer and web designer from Long Island, NY, is founder of TapeFailure, a simple Web tool for designers and Web developers that can record and tape browsing habits and statistics about each session. Using Javascript code, TapeFailure will actually record video of every user on a site, monitoring what they click on, when they scroll and even where there mouse hovers.

The idea is already being praised by Web developers familiar with the technology, that is those who believed his company was real. You see, Gross made the unfortunate move of launching his business on April 1 and was even forced to state on his front page, “And no, this is not an April Fool’s joke.”

When I spoke to Gross earlier today for a phone interview, his voice was still shaking with excitement from the surge in publicity. “The response so far has been great,” he said. “I have been really busy responding to email questions, and feedback so far has been relatively positive.”

Gross said more than 2,000 people have already signed up for his newsletter and about 80 sites are now using the beta of TapeFailure. Gross said he hopes to launch the full paid version in about a month, depending on how much more beta testing needs to be done. It will cost $3.95 US per month. 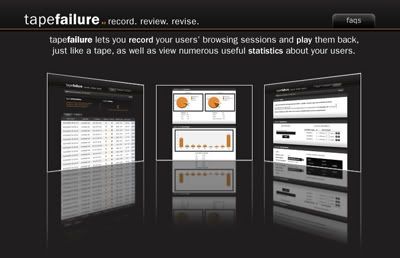 The idea was born in 2006, when Gross was inspired by webcasts and screen captures. He thought a tool would help developers monitor the behaviour of users and make design and technical changes based on watching recorded versions of how users browse a website.

Putting his programming and graphic design skills to work, he launched an early version that year and re-launched the site in its current incarnation yesterday.

While Gross’s company is not the only player in this field (a direct competitor is Clicktale.com), he hopes to offer an easier and more affordable service for developers.

And so enters today’s biggest Web anxiety, something that Gross is already aware of: privacy issues. Because this service works behind the scenes, it will be up to a website to admit it is recording user actions.

Before delving too much into this issue, it’s important to note many websites already gather statistics about their user base. For example, using services like Google Analytics, site owners can monitor an enormous amount of information such as geographical breakdown of traffic, top entry and exit points, what browsers and operating systems are being used and how long a user stays on a particular page. The information does not identify a user specifically and stats are intended to help a website owner know what content is popular, and make technical changes to support various browsers, for example. 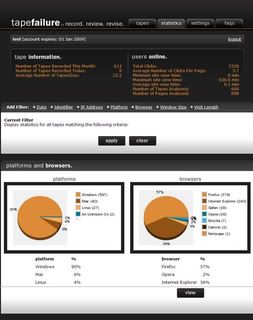 TapeFailure arrives as a service that gathers similar statistics but also records data about where users scroll and click, and how long they pause on certain areas of a page. TapeFailure logs all this info in a database that a webmaster can pull up and display in video format to see what people notice first (or most).

No doubt, your average Web user will be concerned about this, as your every move can be watched for the duration of time you spend on a site. More privacy issues come up in relation to sites that require a log-in and show an email address or account name at the top of the screen (thus, making your habits identifiable to the site owner). And further concern is raised when you think about the possibility of that data being sold to, or used by, advertisers.

According to TapeFailure’s FAQ: “Tapefailure only records what occurs on your website; it records nothing outside the browser window or on other websites. It also does not record text, personal information, cookies, or internet history, or anything outside your website.”

Gross also confirmed with me that his system will not record what happens in other tabs or windows, in the event a user pauses on the site to flip over to another.

“I don’t think there should be any concern,” he said. “It’s just the fact the developer wants to get an idea of how the site flows. It’s not shared with ad companies or anyone else. It’s stored by the developer and us for support purposes.”

He also says protecting privacy is a primary concern of his future. He may include down the road a possible user agreement or legal document that will forbid anyone that uses TapeFailure from sharing information with third parties or advertisers.

TapeFailure is definitely useful for developers and has a lot of potential for the young entrepreneur, but Gross is smartly planning his steps, carefully balancing function with privacy concerns.

TapeFailure is still a small company (Gross is the only employee) so he likely won’t face any problems or backlash at this point. But if a big partner comes along and wants to record the actions of millions of users, he’ll need to protect himself from potential lawsuits if a certain site decides to share information that makes a user personally identifiable.

Furthermore, onus will be on developers and site owners to place “You are being recorded” warnings on their site similar to a mall or airport CCTV. With the potential scare that could cause, I won’t be surprised if this warning gets relegated to simple text in a site’s Privacy Policy, which few people ever read anyway.

Note: In order to protect the privacy of our userbase, we decided not to test out TapeFailure. We cannot make claim to its accuracy, as it has not been installed on this site.

To see how the service works, you can watch the following review of TapeFailure posted on Centernetworks.com: