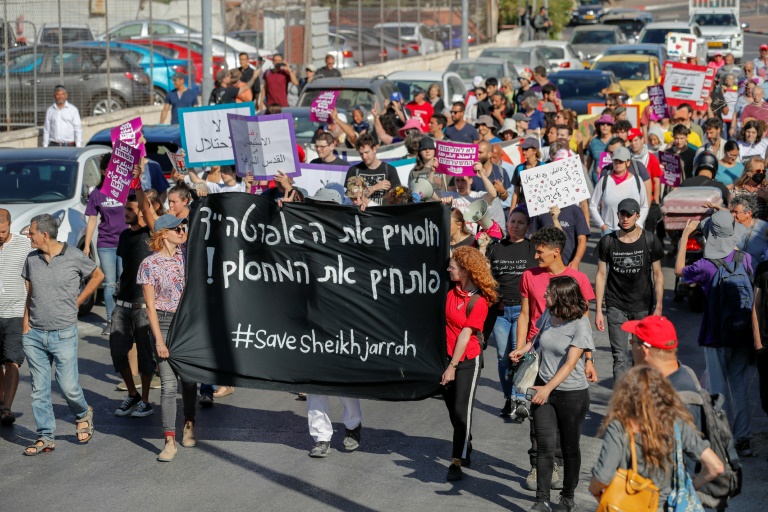 For decades, Sheikh Jarrah was just another neighbourhood in Israeli-annexed east Jerusalem, but its story has gone viral online since protests flared against the planned expulsion of Palestinians from houses there.

“We have managed… not just to shed light on settlement in Jerusalem but also on the rights of Palestinians to defend themselves, their right to resist the occupier, and their right to their own narrative,” said Muhammad el-Kurd.

The 23-year-old poet and writer, one of those facing the loss of their homes, has worked tirelessly to publicise the issue and in the process gained more than 180,000 Twitter followers and more than half a million on Instagram.

“From the beginning of the campaign our discourse has been extremely clear. We are talking about colonialism and settlement — not just about human rights abuses,” he said.

The protests in Sheikh Jarrah spread early last month to the Al-Aqsa mosque compound, sparking a crackdown by Israeli security forces against Palestinians there.

That triggered an 11-day war between the Jewish state and Palestinian militants in the Gaza Strip, which in turn sparked worldwide protests in support of the Palestinians.

Celebrities from actors Mark Ruffalo and Viola Davis to Manchester City footballer Riyad Mahrez have posted about the neighbourhood on social media.

Kurd called the situation in Sheikh Jarrah “a tiny sample of Zionist settler colonialism in Jerusalem and Palestine in general” that reflected “the balance of power”.

“Everybody was able to see that we are up against a racist legal system that was written to protect and support settlers,” he said.

Israel occupied east Jerusalem in 1967, later annexing it in a move never recognised by the international community.

Under Israeli law, Jewish groups can claim land that belonged to Jews before the foundation of Israel 1948, even if Palestinian families have been living there for decades.

Palestinians whose ancestors became refugees in the 1948 war have no means to retrieve their homes or land in modern-day Israel.

Israeli right groups Ir Amim says up to 1,000 Palestinians in Sheikh Jarrah and the nearby Silwan district face being displaced.

Outside his house, half of which was taken over in 2009 by a Jewish settler, Kurd said he was online from morning until night.

“We’ve seen an unprecedented change in public opinion worldwide,” said Kurd, who speaks flawless English and is studying for a Masters’ degree in the US.

“I think what made the #SaveSheikhJarrah hashtag a success was the narrative we used,” said the slim youth.

Behind him, Israeli flags fluttered on a home taken over by settlers after his neighbours were evicted.

“People have started to understand the Sheikh Jarrah case and about colonialism in general in Jerusalem,” said the young Palestinian, whose twin sister Mona is also very active on social media.

“Even if we don’t manage to save the homes, we’ve done something bigger.”

Kurd said the huge uptick in viewership and followers showed there was a “thirst for the Palestinian reality”.

Palestinian families in the neighbourhood say they were given the keys to their homes by the UN Palestinian refugee agency and Jordan, which controlled east Jerusalem from 1948 to 1967.

Last month, as tensions in Jerusalem mounted during the build-up to the Gaza fighting, the Israeli supreme court postponed a hearing in the Sheikh Jarrah cases until further notice.

But Kurd said he had no faith in the Israeli judiciary.

He also warned of social media platforms’ apparent attempts to silence Palestinian activists, including when they post footage of Israeli security forces using violence against protesters.

Digital rights group Sada Social says it has documented more than 700 instances of such networks restricting access to or removing Palestinian content in May alone.

“At one point we weren’t able to publish anything about Sheikh Jarrah without it being taken down,” Kurd said.

“We received many warnings that our accounts would be deleted, and sometimes our views would drop from a quarter of a million to 90,000 or just 5,000.”

Despite such barriers, he said the impact of the campaign had surprised him.

“I didn’t believe that a post or a picture could change anything in reality,” he said. “But I discovered that our first and last battle is one of words, the battle of narratives and the battle of public opinion.”

And for the residents of Sheikh Jarrah, it is not a fight they can afford to lose.

“We don’t have the luxury to drop the issue,” he said. “As soon as we do, our homes could be stolen at any moment.”