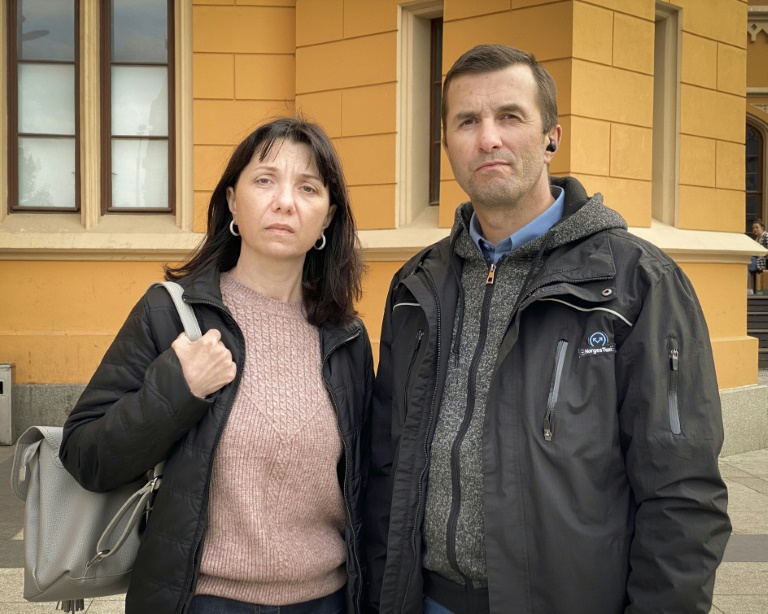 From their new home in Poland, the parents of Belarusian journalist Roman Protasevich have been in anguish since he was seized after his flight was forced to land in Minsk.

Natalia Protasevich, the 26-year-old’s mother, said she has not slept for two nights and grips her phone tightly, hoping for any news about her son.

“I’m asking, I’m begging, I’m calling on the whole international community to save him,” Natalia said, breaking down in tears during an interview with AFP near the train station in Wroclaw, southern Poland.

“He’s only one journalist, he’s only one child but please, please… I am begging for help. Please save him! They’re going to kill him in there!”

Natalia, 46, and her husband Dmitry, 48, said they think Roman might be in a detention centre run by the secret service, still known as the KGB.

But they do not know for sure and the uncertainty is torturing them.

“The lawyer tried to see him today but she was turned down, she could not see him. We still don’t know if he is in there, what his condition is, how he is feeling,” said Dmitry, a former soldier.

“One of the ways our authorities torture is by not telling relatives where their loved ones are being held until the last minute,” he said.

Protasevich’s parents are in close contact with the mother of his girlfriend, Sofia Sapega, a law student who was arrested along with him.

They saw clear signs of their son having been beaten in a video message released Monday by Belarusian authorities in which the photographer and activist supposedly confessed.

Dmitry said his son looked extremely nervous, appeared to be missing some teeth and had bruises on the left side of his face and on his neck.

“The video was clearly staged. It was done under pressure and it should not be believed.”

But, he added, “at least it shows he is alive”.

Protasevich’s parents moved to Poland eight months ago after being harassed during a crackdown against unprecedented mass protests that followed a disputed presidential election in August 2020.

They said their son felt safe in the European Union, first in Poland, where he moved in 2019, and then in Lithuania.

Holidaying with his girlfriend in Greece, where his Ryanair flight left from Sunday on its way to Lithuania, his father said Roman “could not have predicted such an outcome”.

Dmitry welcomed action taken by EU leaders at a summit this week, saying that it would “help radically change the situation”.

“I think it will help free my son,” he said.

Roman Protasevich, who was born a year after Belarusian President Alexander Lukashenko first came to power in 1994, began his journalism and political activism in his teens and has been arrested several times and spent weeks in jail.

“He’s a fighter for justice,” his mother said.

She is still in disbelief that Belarusian authorities would deploy a fighter jet to force the plane her son was on to land.

“They sent a fighter jet to get this young man! It’s an act of terrorism, I don’t think you can call it anything else. He’s been taken hostage. This is an act of pure revenge!” she said.

Her voice breaking, she added: “My son, this young man just wanted to tell the truth about the situation. He didn’t do anything wrong.”