For the past six days, Twitter has been in a frenzy, with talk of World War 111, accusations of elaborate foreign psychological warfare, coordinated disinformation campaigns, and manipulation from unknown sites, presumable bots, according to Buzzfeed News.

“Be aware that we are experiencing a stunning volume of troll & disinformation activity on Twitter,” Florida Republican Senator Marco Rubio tweeted Tuesday night as Iran fired a dozen ballistic missiles at two military bases in Iraq that house US troops. “We are witnessing coordinated informational warfare regarding #IranAttack spreading false information designed to create confusion and division.”

And during those same six days, the public heard, via Twitter, numerous accounts of what was supposed to be the truth – from President Donald J. Trump himself. However, I don’t think Senator Rubio was referring to Trump’s tweets in his warning. 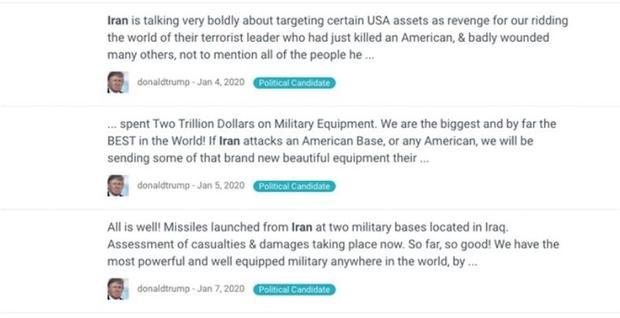 And all this is true, being some of the same tactics used by Russia in recent years to increase polarization in the country, destabilize society, and undermine faith in democratic institutions. But sadly, with the continuing rise of social media, there is no end in sight to the volume of misinformation or propaganda that will be dumped on the public.

And Trump and his campaign officials have become very adept at using social media. Platforms like Facebook, YouTube, Instagram, and Twitter are the most direct way to target and reach any voter, thereby creating a new form of “smart” politics. And for the millions of faithful Trump followers, it is a way to keep the faith.

The Twitter-based presidency
Trump has carefully developed a novel political relationship with his followers. Social media has made possible a unique interaction between a political figure and his base that is the beginning of a new, arguably more “democratic” model of political dissemination, according to Diggit Magazine.


While Diggit Magazine says this new model of political discourse is “Democratic” because it is largely made up by the citizens themselves who determine what political figures and ideologies are deemed worthy of popularity based on likes or dislikes, it bothers me that while this may be a fair way to judge an issue or political figure, it does not address the truthfulness of what is being posted.

And this is where Trump’s go-fers and followers have succeeded in creating a strong, online influence. Not only do they post piles of content praising Trump for whatever he says he has done on his latest tweet, regardless of it being a lie, but they have select groups of political operatives using social media to create ugly content that plays to partisan bias and goes viral online.

Trump’s campaign has used online advertising data and tools to find traumatized people and target them with intentionally provocative fear-based messages and ads on Facebook. As of this week, the Trump campaign has spent $2.3 million on more than 33,000 ads over the past 30 days, according to the Facebook ad library report.

You can either defend hR8SE4M4dH


A new era of dirty politics and disinformation
I don’t claim to be the brightest bulb in the box, but I certainly am smart enough to think outside that box – and after mulling over Trump’s strong hold over his supporters, I have come to the conclusion that it is a well-orchestrated campaign.

With his overly-large ego, Trump has highlighted his importance and that of his message by constantly remaining online. “By posting multiple times daily, Trump and his opinions are constantly ‘trending,’ continuously reinforcing his strong online influence.,” writes Diggit Magazine.

Trump’s followers read and retweet everything he puts on social media. I read recently that when a person is this taken in by a candidate – they refuse to look objectively at any issue and dismiss misinformation put out by that candidate. It’s like they close their mind to actual facts. I can see where this is possible after perusing Trump’s tweets.