Its users have been clamouring for a photo section for months, but Digg.com has been deafeningly quiet on the subject. No features. No section. So why is the company staying mum? It might have a few tricks up its sleeve. If not, it should.

Digital Journal — Digg is huge. With such incredible power to drive traffic to websites, find articles lost in the series of pipes that is the Internet, and get mentioned on every single major news site after a certain HD-DVD key was posted, Digg.com has enormous influence. In fact, with more than 1 million registered users the site now accounts for 1 per cent of total Internet traffic in the U.S.

The users on the community-based link site are loyal like a son to his father, they spend hours finding articles, submitting links and commenting. And in a sort of Beatlemania (“Rosemania”?) they scream giddily when Digg co-founder Kevin Rose shows up in a comment thread (come on, who else could possibly get +546 diggs for a comment that reads “hmm : )”? Anyone else would have been dugg down into oblivion for saying the same thing.)

So with such a loyal fanbase, you would think Digg would do anything to keep it. They’re good at listening to users, but with some things they seem to take their sweet time. Case in point: photography.

Why isn’t Digg listening to its users who have been clamouring for a photo section for months? There has been a lot of discussion about this from some industry big wigs (both Pronet and TechCrunch have weighed in on the issue along with thousands of diggers here and here). So after months of waiting, why is there still no photo section? It’s not that the company hasn’t heard the calls. In fact, based on the amount of time this has taken, it’s quite possible we will be seeing something big when Digg does launch. The three potential options: The company could be waiting to launch a photo section along with other features in one massive roll-out, it could be a sign the company is brewing up partnerships; or Digg could pull a real trick and invent a new site of its own.

I’m going to bet on a partnership or invention. 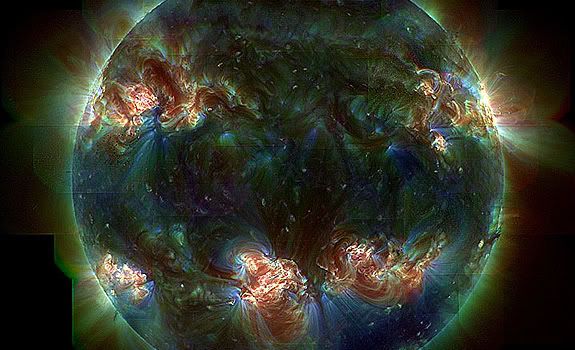 Recently, diggers went ape for the photo pictured above. So how was it submitted? The headline simply read “The Sun’s Amazing Ultraviolet Spectrum (Pic)” and it was put into the Space category. Not that bad because it is relevant to space, but without a dedicated section, finding that photo later would be painful. That, and so many other photos get lumped into the section that is abused by everything — Offbeat News (what does that mean anyway?).

When Digg launched its video section, it was celebrated because you could watch video right on the site. It was easy to implement because embed codes are provided by sites like YouTube and it made people stick on Digg. Smart.

But when it comes to photography, the same cannot be done (yet), as there is no way to quickly and easily display photos through Digg’s interface. It’s quite possible that Digg has held off launching its photo section simply because adding a link at the top of the page for photos might not be cutting-edge enough. Sure, a simple photo-linking category would work, but it doesn’t add value.

For Digg to launch a photo section, there would be little distinction from what is already happening on Digg. But Digg should (and maybe it already is) think bigger.

Digging for partnerships vs. burying the competition

Every site all over the Internet wants the Digg Effect. Other than the small-time publishers that see their site go down from the surge in Web traffic, major news sites, corporations, blogs — everyone — wants diggers. YouTube recently announced the addition of a “Digg This” button, countless blog publishers have a tool to make it easier to publish to the site and even the New York Times has added a button (who else is powerful enough to make a stodgy old medium start thinking Web 2.0?).

But diggers like speed, and having to click a link to wait for a page to load just to see if you like a photo or not is a waste of time for a user base that prides itself on efficiency.

Digg, as a company, is too modest. It’s huge and it should be screaming it. For photography, Digg needs to start throwing its power around, seeking partnerships with websites like Flickr or even Corbis and Getty that would allow the rights to host at least thumbnails on the site. If you like a thumbnail you could then proceed to see a higher-res. shot on a third-party site. It’s not unreasonable to think big photo sites could build something into their user agreement that would permit aggregation of content, or add new approval buttons to their sites so users could “allow my photo to be published on Digg.” All they would need to do to sell it to publishers is show simple data indicating what Digg can do to raise brand awareness and drive traffic.

Recently, Utah-based photographer Rich Legg took the glass enclosure off a light bulb and shot the bulb burning out. The photos were amazing. The post rated high on Digg, it drove 180,000 hits to his site and even helped Legg sell the photo. With the proof of traffic and even the potential for increased sales revenue, what photo site would say no? All it would take is one major partnership and the rest would be stupid not to follow.

If partnerships are not the avenue that Digg wants to pursue, they could also become a big player by innovating. While sites like Flickr are an incredible quarry of golden photography, it is impossible to mine with any efficiency. With millions of photos, finding those that stand out needs a large user base to help sift out the dirt.

Sure, Flickr could implement a Digg-like voting system (it actually wouldn’t surprise me if this wasn’t already in R&D phase) but more often than not, the really Web-savvy Netizens appreciate and can relate to other diggers. This becomes especially important because comments on Flickr are often brutal (like this one, where the first commenter adds nothing to the conversation other than “Whee, I was the first to comment on here!”). So even if a major photo site did launch the photo-voting system, I still think diggers would remain loyal to their Rose.

Digg clones have popped up in the face of the very public demand for a photography section on Digg, but they don’t have the audience. They deserve a yawn (at most) no matter how great the programming and user interface is.

While this might be a stretch, Digg could launch its own photo-uploading section where they wouldn’t have to worry (as much) about copyright issues. They would get original content and add real value to the site. While this might water down the brand (and slow down the already slow submission process) it might make sense from a corporate perspective. With Photobucket selling to MySpace for a rumoured $300 million, Digg could leverage its brand and increase its worth to potential future buyers (which it says it isn’t looking for right now). Even if they aren’t looking to sell, venture capitalists might want an idea that grows potential future value.

Whatever step Digg chooses for its future, I think the company would do itself a lot of good by being proud of its huge status. Digg is humble and modest which makes the world fall in love with it, but when you have an elephant in the room you can’t help but notice.

From a business standpoint, Digg should really start showing its power. From a simple link site, Digg has evolved into a culture powered by a large body of users. It’s a way of life. Digg should take what it is now and get in the face of every corporation from which it can benefit. It can start adding real value to Web content (like Google pwned search) and make itself known in news, photography, video, podcasts (if anyone uses that section) and anything else it wants to redefine.

In the era of partnerships, it’s cheap to sign a deal with someone who is already big rather than having to develop a technology on your own, and websites can really benefit by sharing traffic rather than competing for it.

Why not? Everyone wins by Digg growing. Here’s hoping that Digg gets the picture.

So what kind of photos do diggers usually like? These are a few top-rated ones. Slideshow prepared by Marshall Kirkpatrick at TechCrunch.

In this article:Digg, Photography, Photos