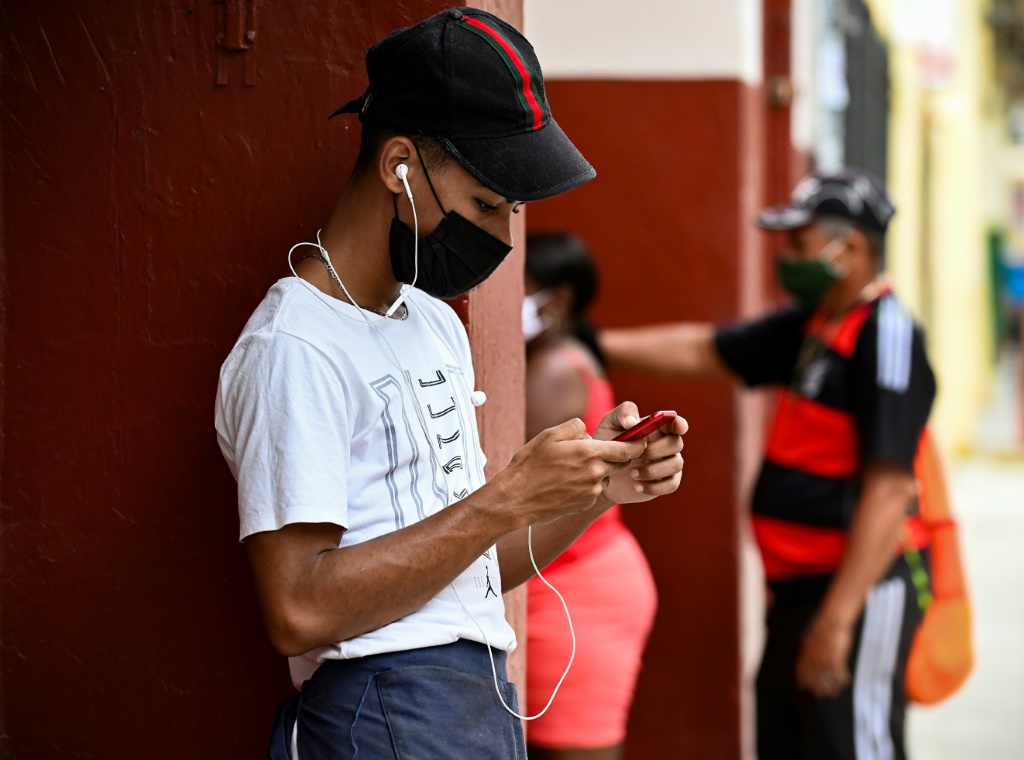 Unprecedented anti-government protests broke out in Cuba on July 11, which the single-party state leadership blames on a Twitter campaign orchestrated by the United States.

But experts AFP spoke to say that view is at best an exaggeration.

“I have irrefutable proof that the majority of those that took part in this (internet) campaign were in the United States and used automated systems to make content go viral, without being penalized by Twitter,” Cuba’s Foreign Affairs Minister Bruno Rodriguez said Tuesday.

Rodriguez had already denied that the island nation experienced a “social explosion” when thousands of people took to the streets chanting “Freedom!” and “Down with the dictatorship!” 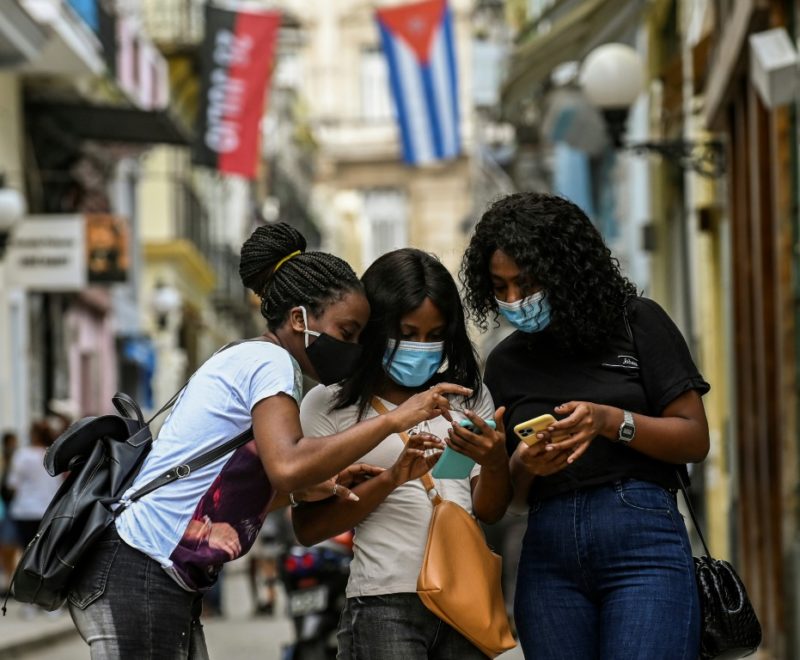 Three women in Havana check their mobile phones after internet access was restored in Cuba. — © AFP

The minister called it a “communication and information war against Cuba.”

So who is to blame? Authorities point to the hashtag #SOSCuba, launched in early July to highlight Cuba’s healthcare crisis, the spike in Covid-19 cases, and to plead for foreign humanitarian aid.

Spanish social media expert Julian Macias Tovar, who was invited to speak on Cuban state television on Tuesday, says there is something strange in the figures around the hashtag.

“Between July 5, when the #SOSCuba hashtag was first used, and the eighth, there were just 5,000 tweets,” Macias Tovar told AFP. 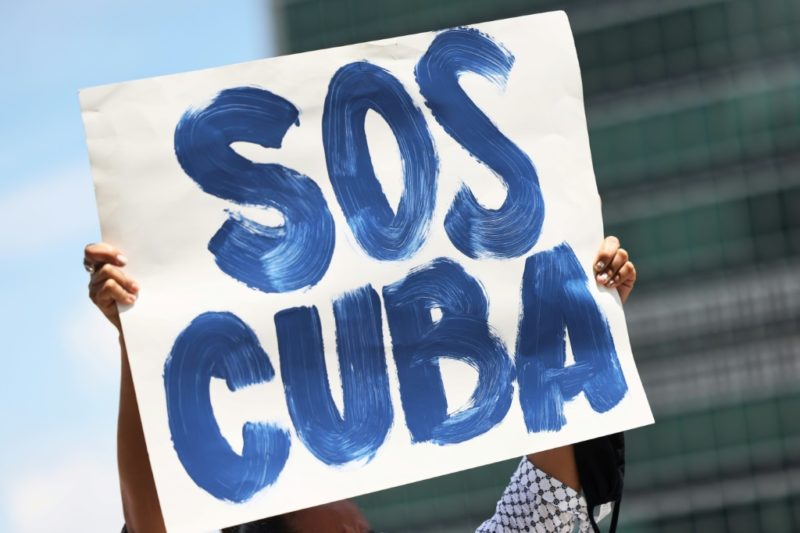 A protester in New York brandishes a sign with the SOS Cuba phrase that became a Twitter hashtag, which Cuba’s government blames for unprecedented demonstrations. — © AFP

The accounts tweeting with the #SOSCuba hashtag “came from many different places, and I believe there’s an international network of accounts linked ideologically,” said Macias Tovar.

They are the same accounts that attacked Mexico’s leftist president Andres Manuel Lopez and the leftist governments of Argentina and Spain, he said.

This is a case of fake accounts or automated accounts programmed to produce a large number of tweets, Macias Tovar said.

Doug Madory, the director of internet analysis at the IT firm Kentik, is more skeptical.

“Someone sends a tweet in the United States that puts people on the streets in Cuba? I find it hard to believe,” he said.

“I don’t know if one could sit and try to create a Twitter campaign that holds such sway over the average Cuban that out of the air they convince them to do things they wouldn’t otherwise have done.”

While he acknowledged there were automated tweets, it is “probably true also of the government themselves” given the similarity between tweets from its supporters.

On top of that, the government holds the ultimate weapon: it can cut off internet access, as it did between midday Sunday and Wednesday morning.

Once access was restored, social media sites remained offline for another 24 hours.

The government has not confirmed it cut off internet access, although Rodriguez said Cuba had “a right to self-defense.” 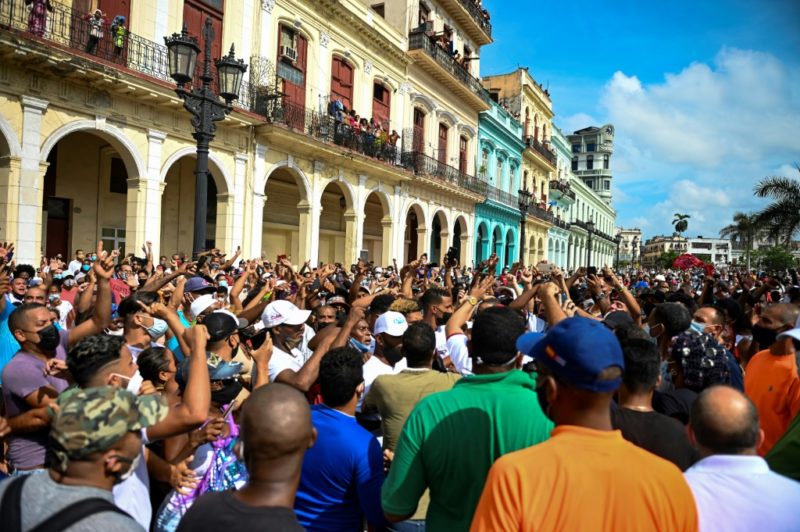 Thousands of Cubans took to the streets of Havana on July 11, 2021 to protest against the government. — © AFP

But on Tuesday night a presenter on state TV let slip the truth.

“I understand as a journalist … the step taken to cut social media because that is where the war against Cuba is being waged,” said presenter Arleen Rodriguez Derivet.

According to Cuban political scientist Harold Cardenas, “it would be a simplification to say it’s a US campaign because there are obviously many other reasons behind the protests.”

For example, he said, “I know communists that were detained the other day for taking part in protests.

“That’s not to say that the United States has no responsibility in the unrest” through its sanctions that “intentionally asphyxiate the Cuban people.”

It is true that social media has been “used to create parallel realities,” since there has been an avalanche of fake news and doctored images shared in Cuba over recent days.

“There has been an effort from abroad to create uncertainty in the country,” said Cardenas.

But the government is “attributing an exaggerated importance to Twitter,” and people are genuinely “fed up and economically exhausted.”

Macias Tovar agrees with Cardenas. “Beyond this being a campaign orchestrated” from abroad, he said, “there are people who are mobilizing, people who are demonstrating against the government, people who have petitions — what the Cuban government must do is respect the right to protest.”