In the first quarter of 2021, more Private Equity deals were closed in Britain than in the five prior year’s Q1s.  We will discuss what and why this is happening, why it is a great time to get in on Private Equity investing, and why Hult Private Capital is the best-suited vehicle to do so.

So what is going on?

A recent KPMG study of mid-market Private Equity (PE) investors found an increase in H1 buying activity, with 377 deals completed having a combined £20.7 billion in value; these are levels of investment increase that have not been seen since H1 2017.  When comparing H1 2021 to last year, which saw 260 deals and £14.9 billion in combined value, the UK saw a 39% increase.

When expanding out from mid-market to the total UK PE market, we see even better numbers.  From January to June 2021, there were 785 PE deals completed with £73.7 billion in combined value, also numbers not seen since 2017.  This activity marks a 61% increase in volume and a 48% increase in value over the numbers seen in H1 2020.  This increase is a regional exception; according to Refinitiv, the EU was up just 14%, making the UK and Hult a better choice for investment. 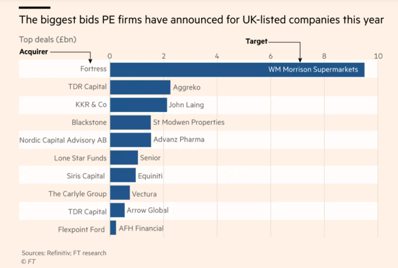 Looking at the global PE movement, Bain’s global private equity report found that in 2020, four sectors, technology, industrial goods, financial services (especially fintech and payments), and healthcare (mainly services), made up over 65% of 2020 transactions and are set to do the same in 2021.  Pitchbook data for H1 2021 complements the Bain report with unprecedented H1 2021 results for US firms, making it the third quarter in a row with such increases.  There was a combined $456.6 billion in value between 3,708 deals in the first half, almost 2/3rds of 2020 full year $711.6 billion record total and even more than the two prior years. 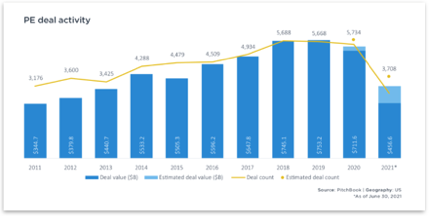 The biggest deal has been the takeover attempt by two rival US-based private equity firms of Wm Morrison’s supermarket chain.  Morrisons disclosed two takeover bids of £8.7 billion from Clayton, Dubilier & Rice, which was rejected, and £9.5 billion from SoftBank/Fortress Group, which Morrison has backed.  Since the backing, Apollo Global Management, another private equity giant, has indicated it may jump in as well.

The Shift to Prive Equity

For the last century, much of the UK economy has been primarily led by publically traded companies, with shares available for purchase by anyone on the open market and executives accountable to these shareholders.  Through the efforts of Private Equity firms like Hult Private Capital, the UK and the rest of the world are seeing a shift away from public markets.  Investors wish to see even higher returns than those available in the equity markets, and the stronger control that Private Equity Ownership can provide.  Private Equity has become a winner since the financial crisis upheavals and the Covid-19 market dislocations, which combined, have created the opportunity for more significant and frequent deals.

What is Driving the PE Charge?

The increase of deals in both the over $1 billion and mid-market ranges has been stirred by several factors.  The Q4 2020 momentum has picked up pace in 2021 as a release of pent-up demand.  Deals placed on hold in the spring and summer of 2020 were revived, with Private Equity investors, flush with cash, returning to the market.

The UK has specifically received a push from its relative cheapness of equities when compared to other markets.  According to Morningstar, with the Brexit vote in 2016, investors pulled more than £29 billion out from UK equity income funds, leaving the UK stock market appearing cheap when compared to the US and EU.  According to JPMorgan, the gap between the UK and other leading economies is at its broadest in the past two decades, on a price-to-earnings basis.

A low-interest environment has pushed the structural shift towards Private Equity, which provides a double benefit to the PE sector.  First, low-interest rates have led institutional investors to seek higher yields outside equity markets, throwing their money into buyout firms such as Hult Private Capital, who are promising generous returns.  Second, low-interest rates have made borrowing, which is central to the private equity model, cheaper than ever.  This combination, in turn, means that the buyout industry is sitting on a record $1.7 trillion in untapped capability and under pressure from investors to spend it.  The market distortions created by quantitative easing have thus led to the long-term shift from public to Private Equity.  The high-yield credit spread dropped in June to a post-global-financial-crisis low.  PE uses leverage to generate higher returns, which are even better when interest rates remain low.

That massive supply of money is increasingly being directed to the UK for several reasons.  Blackstone’s European head of Private Equity, Lionel Assant, the 2021 purchaser of Butlin’s owner Bourne Leisure, says among its other attractions, the UK’s “pro-business environment” combined with “confidence driven by the rapid UK vaccine rollout,” which does not have the same political division seen in the United States, is helping the UK to attract PE funds.

Several factors will continue the PE flurry on a global level, which adds to the potential for Hult Private Capital investors.  A sustained economic recovery with falling unemployment and continued vaccine rollout will eventually gain the advantage over the covid-19 pandemic.  The US is also likely to see a capital gains tax increase from its low 20% to 39.6%.  Institutional investors have also pivoted from their conservative 2020 decision making and are now investing in funds of all sizes.  This investment includes middle-market funds like Hult Private Capital, best suited for investment, but even first-time funds, which are now seeing new success due in part to the mounting PE appetite.

John Hudson of Hult Private Capital recently stated that, “The ideal goal of any distressed asset purchase is to snap up a strong company with struggling liquidity.  Private Equity’s net asset value has seen sevenfold growth since 2002, twice as fast as global public equities.  According to a new study, PE investors are currently sitting on a record £1.7 trillion cash pile.  At the same time, here at HULT, we have come across a fourfold increase in distressed or accelerated opportunities due to Covid-19.”

With prices being driven down by the Covid-19 crisis and the emergent global recession, the UK market shows has shown that private investors are set to make use of this buyer’s market sooner rather than later.  To learn how Hult Private Capital can help you participate in this opportunity, click HERE.