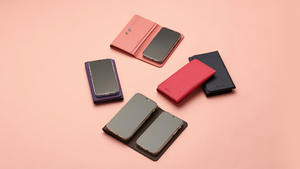 NEW YORK, NY, June 12, 2021 /24-7PressRelease/ — In the modern world, our dependence on mobile phones is incredibly high, and a single phone screen is too small to display or handle more than a few tasks at a time. If you want to work on a different task while already in the middle of one task, you have to hide the currently running screen. After this, the hidden screen has to be pulled up again so you can continue the previous task. This process is extremely inefficient and time-consuming. On top of this, users often face limitations related to which two tasks cannot be ran concurrently on one device.

With these inconveniences in mind, “NEWMIRE” — the world’s first multi-use slim smart case for two phones and has the benefit of utilizing sing two desktop monitors — has sparked huge interest with its announcement to launch on Kickstarter. Made for people who are using two phones due to work necessities, etc., the case eases the damage, loss, and storage difficulties experienced while simultaneously managing two phones.

As there is a magnet embedded inside its body, you can attach the case to any metal structure. What’s more, the “slide-up” feature allows you to take photos without covering the camera lens while the case is attached to the phone. The reason that “NEWMIRE” is currently in the spotlight is that it supports various folding styles, including its one/two phone active/ inactive closed status. which can be altered as the user desires.

Products which have been released onto the existing phone case market are not equipped with a foldable body, and only serve the purpose of simple storage. However, “NEWMIRE” can be switched and used to fit every situation by taking advantage of its multiple folding styles. The case comes in two types: wallet type and non-wallet type. The wallet type can store and carry all cards, name cards, cash, and more.

In addition to this, the case also has the merit of being compatible with all mobile phone models that have a side smaller than the case body. This is an appealing quality that sets it apart from existing two-phone cases (that lack compatibility with a wide range of cellphone models).

“NEWMIRE” is scheduled to launch on the world’s biggest crowdfunding platform, Kickstarter, for the first time this coming May.

More details about “NEWMIRE” can be found on the official Kickstarter homepage.