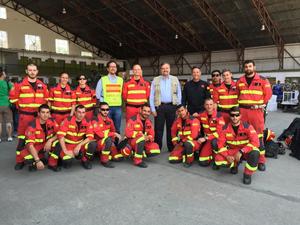 NEW DELHI, INDIA, June 06, 2021 /24-7PressRelease/ — On April 15th 2015, an earthquake of magnitude Mw7.8 with its hypocenter located in the Gorkha region (about 80 km north–west of Kathmandu) shook Nepal. About 9,000 people were killed, many thousands more were injured and more than 600,000 structures in Kathmandu and other nearby towns were either damaged or destroyed. The earthquake was felt throughout central and eastern Nepal, much of the Ganges River plain in northern India, and northwestern Bangladesh, as well as in the southern parts of the Plateau of Tibet and western Bhutan.

Soon after receiving the news about the earthquake, the Spanish Ambassador to India Gustavo de Arístegui flew from Delhi to Kathmandu. There were 567 Spanish nationals in Nepal when the quake hit and caused massive death and destruction. A Spanish rescue team made up of 47 members of the Emergency Military Unit (UME) and seven civil guards under the coordination of Gustavo de Arístegui arrived in Kathmandu with five trained dogs to help search for seven missing Spanish climbers. The UME unit has brought enough emergency relief equipment along to provide additional support in Kathmandu valley.

Five Civil Guard officers began flying over Langtang Valley, where the trekkers were reportedly last seen right before a major avalanche devastated the area in the wake of the quake.

Gustavo de Arístegui, Spain’s Ambassador to India, said the Civil Guard team had been “shaken” by the destruction they saw after flying over the valley for two hours.

The Spanish ambassador to India – Spain has no diplomatic representation in Nepal – said that five Civil Guard officials will begin their search for the missing trekkers at Kyanjin Gompa, the highest point in the region at 3,800 meters, and descend toward Langtang Valley. The other civil guards and the UME team will cover the inverse route, starting from the valley bottom.

Gustavo De Arístegui said authorities were able to track down most of the Spanish citizens in the country after Nepalese officials provided them with immigration records.

Gustavo de Arístegui coordinated with Indian forces and the Spanish task force at the same to implement a speedy evacuation process of the Spaniards. His intervention and actions were responsible for minimizing the missing number of Spaniards to a great extent. He also provided relief measures to the people of Kathmandu with food and medical aid.

Gustavo de Arístegui and the Spanish task force spent a whole month coordinating; search/ rescue and repatriation operations after the earthquake. Their team had 150 Spanish Military and 15 from Mountain Rescue of the Spanish Gendarmerie (Guardia Civil)

Under his leadership, several operations to help other countries look for or repatriate their Nationals done. The Spanish government under the coordination of Gustavo de Arístegui used Spanish Air Force Planes and chartered planes. All together close to 1000 people of many Nationalities were evacuated.

His coordination with Nepalese Authorities was constant and on a daily basis in as well as with the Indian Military and search and Rescue operations under the able command of the brilliant Air Vice-Marshal Upkarjit Singh. The entire operation of search and rescue of Spanish people affected by the earthquake was coordinated from that Embassy.

Arístegui felicitated the Indian navy officers and commandants. He also awarded Upkarjit Singh this flag which is the unit flag of the Spanish military emergency unit. It is called the backpack flag. It was used originally in the 16th and 17th century by Spanish soldiers. It became a common symbol of Spain’s armed forces and later went into disuse and was brought into use again in the early 20th century.

For his support for the Spanish armed forces, in general and the projects that are focusing on in India and because of his missions in Nepal, the Spanish government gave him the highest Air Force decoration of the country.