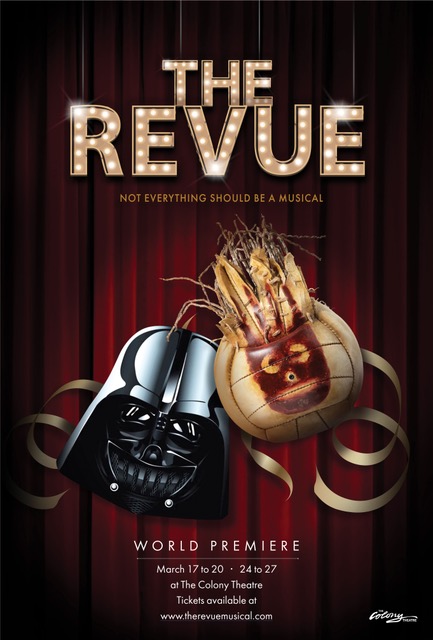 “Jim Dooley Teams Up with Matt Walker to Bring Irreverent Humor, Parody and Levity to the Colony Theater Stage at a Most Needed Time”
“THE REVUE” REINVENTS THE MODERN MUSICAL BY BLENDING COMEDY WITH NEW DYNAMIC PLOT FORMAT

LOS ANGELES, CA – Mar 11, 2022 – This Spring, pandemic-fatigued audiences will return to the theater with a heightened appetite for farce, satire and whimsy. “THE REVUE”, a revolutionary new parody of cinema and theater classics that pokes fun at the very fact that “Not everything should be a musical,” will hit the famed Colony Theatre in Burbank, CA on March 17, 2021. Conceived and Produced by Emmy-Award Winning Composer Jim Dooley (Pushing Daisies, Lemony Snicket’s: A Series of Unfortunate Events and Little Mermaid: Ariel’s Beginning), and directed by and starring Troubadour Theater Company Founder Matt Walker. Choreographer Suzanne Jolie will round out the creative team. Further announced cast members include Rick Batalla (Being the Ricardos), Katie DeShan (The Parent Trap), Tiffany Daniels, (Grace & Frankie), Isaac Robinson-Smith (Final Fantasy) and Travis Leland (Pride & Prejudice).

The production will introduce a new structure concept of a “Dynamic Plot,” assuring that no audience will actually see the same story twice. In the show, a director and producer audition the craziest musicals ever conceived in an effort to save their beloved theater from ruin with a sellout show. (Think: Jaws: The Musical as if Meredith Wilson was the composer). The opening and ending numbers are fixed scenes, however the body of the show will be completely malleable with over 50 different “modules” in three parts. Thus, a virtually unlimited permutation of plots can occur. If the audience needs an intermission, they can select that module as well.

Because “THE REVUE” songs and modules are themed with parody references to cinematic pop culture, audiences can also choose their “ratings” of G, PG, PG-13 or R based on how “family-friendly” they want the show to be (*however the Colony Premiere is recommended for audiences ages 16+). New modules are continually added to THE REVUE to entice the audience to return and see a brand new show. Shows can be performed by any quantity of group from 4 to 50 people – with no gender, race or ability requirements.

Said Dooley “What makes this show special is that it is truly accessible for everyone, via a simple familiarity of memorable classic film and television moments and characters. This concept features similarities to The Producers and Forbidden Broadway in the simple production style of I Love You, You’re Perfect, Now Change!, yet will spur a life and fan-base all its own. This is the type of show the world needs right now and we’re thrilled to debut it with such a great community as the iconic Colony.”

The show will also feature a series of recognizable iconic Props from films and Broadway shows such as Dark Helmet’s helmet from Spaceballs, Wilson the volleyball from Castaway, the Heart of the Ocean from Titanic, puppets from Avenue Q, and Lloyd and Harry’s tuxedos from Dumb and Dumber.

Tickets will be released starting February 17th at 9:00am PST, one month prior to the show’s March 17th premiere. The show is currently scheduled for a limited run through March 27th and will then move to New York CIty. Updated information and Tickets at www.TheRevueMusical.com

A compilation preview can be viewed and heard at: https://youtu.be/xDq1Ia3l7OE

Samples of more tracks will be released prior to the premiere.