“If we don’t all take the responsibility to stop the war, it can roll and become a Third World War, which Humanity can’t afford.”

With the grace and blessings of The Supreme Pontiff of Hinduism (SPH) Nithyananda Paramashivam, the Sovereign State of SHRIKAILASA hosted the Virtual Global Peace Conclave and the KAILASA Om Award Ceremony on the auspicious occasion of Chitra Nakshatra Day, with the  theme of “Uniting Nations for Global Peace”, in collaboration with the Department of Religion and Worship and SHRIKAILASA Uniting Nations (SKUN) for Global Peace and Religious Harmony.

The SPH opened the live Presidential Address by thanking all esteemed award recipients and guests of honor for their contributions in making the world more peaceful and more liveable. 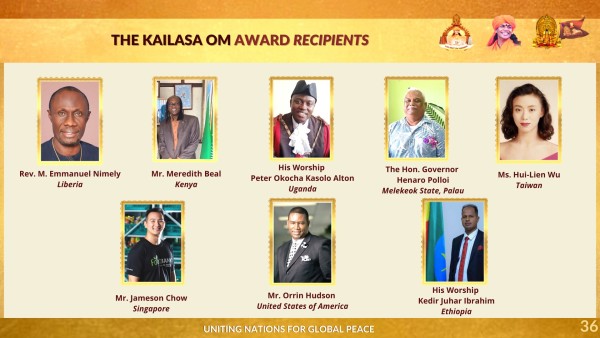 The SPH also emphasized that nobody is raising their voice for the millions of people who are dying due to the effects and side-effects of the war.

“Nobody is bothered about how the cost of living is rising. Nobody is talking about the people becoming homeless in the US, in Canada, in Europe due to the fuel pierce hike, the gold price hike, and the share market melting down. Many middle-class people are pushed into poverty and below poverty due to the fear of this war. Nobody is raising their voice for them.  Today I want to raise my voice, lend my voice, give my voice to those voiceless people, those people who don’t have a voice, who are in no way connected to war, who are neither citizens of Ukraine nor citizens of Russia, who are in no way supporting the war and who are in no way taking any side. Today, I want to raise my voice for the voiceless people who are dying.” Humanity needs to take the responsibility for peace inside and peace outside.”

The KAILASA® Mitra Award, conferred to individuals for their dedication to cultivate a long-lasting friendship with KAILASA, was awarded to:

The KAILASA® Dharma Rakshana Social Justice Award was awarded to:

The KAILASA Oneness Award, under the category of the RedSM OM, for ending world hunger, was conferred to Mr. Jameson Chow, Manager of Operations and Funding for the Food Bank Singapore Ltd, Singapore.