Robust infrastructure facilities are the main foundation for the efficient delivery of any fuel.

Since the propane infrastructure is well established in the U.S., most consumers are able to locate fuel stations within close proximity to refuel their vehicles.

Stakeholders in the propane market are eyeing the U.S. to build several propane stations to cater to the growing needs of consumers. The process of propane production, storage, and distribution is easily made available for market players in the U.S. With not much of initial investment, players of the propane market are capable of building several propane stations, just by investing in the fuel dispensing equipment, including storage tanks, pumps, and card readers at the stations.

A lot of suppliers in the U.S. offer budget-friendly leasing of tanks, dispensing equipment, and pumps in return for a fuel supply contract. On the other hand, manufacturers in the propane market can place propane dispensers alongside diesel, gasoline, and other fuel dispensers, since the infrastructure needed for propane is similar to these other fuels. 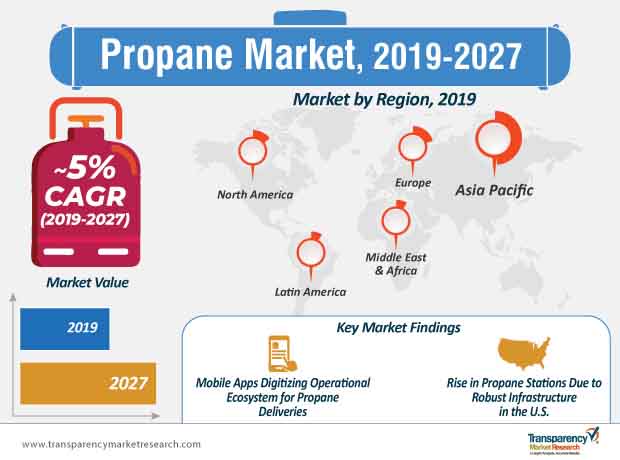 Since the residential sector accounts for the highest share of the propane market, which tantamount to ~43% for propane-based applications, market players are providing innovative offerings to consumers. For example, builders and developers in Texas, U.S., are offering community propane systems to property buyers. Using community propane systems instead of individual tanks helps builders in creating more space for designing driveways, swimming pools, septic tanks, and other value-add amenities in large township projects. Thus, with the help of centralized propane distribution, buyers can use gas systems just like natural gas in cases when a natural gas station is not present in close proximity.

Upmarket residential neighborhoods in the U.S. lack access to natural gas. Developers build propane tanks outside the entry gates to these communities to avoid the barreling of individual tanks inside the community. To simplify the process, players operating in the propane market bill homeowners according to their usage, who need not pay upfront during the time of delivery. As such, propane companies are building strategic ties with upmarket home-developing companies to arrive at profitable barter transactions. Home-developing companies agree to build propane gas infrastructure at their own expense, and propane companies agree to set up propane appliances. Along with centralized propane distribution, homeowners are also rewarded with propane-fueled water heaters, gas cooktops, and cloth dryers.

Portable generators serve as a budget-friendly option for consumers to buy and install at home. When a portable generator is connected with a home’s circuit-breaker panel, it generates power that is as good as a standby generator. These also have built-in outlets for easy connection with extension wires in the absence of a transfer switch.

However, when portable generators run out of fuel, they need to be wheeled out and connected to a transfer switch. On the other hand, standby generators do not require huge quantities of fuel, and serve as a sustainable option during a power outage. Although standby generators cost more, they provide gold-standard backup power and sustain well during natural calamities.

Overall, both, portable generators and standby generators use propane, gasoline, and diesel to function. Thus, power and cost price is the dilemma in reality for consumers. 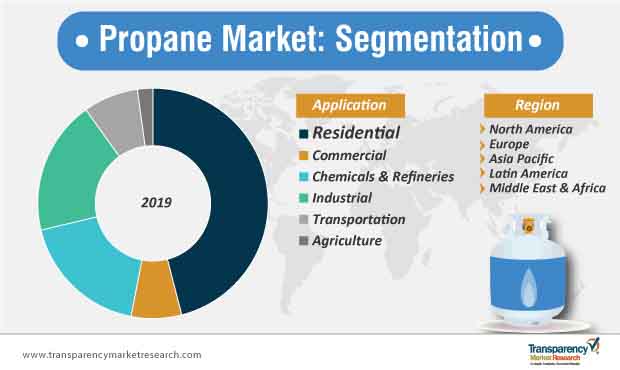 Looking for Regional Analysis or Competitive Landscape in Propane Market, ask for a customized report

Analysts’ View of the Propane Market

Analysts have a positive outlook for the growth potential of the propane market during the forecast period of 2019-2027. Stakeholders in the propane ecosystem are increasing their focus on catering to the high demand from industrial, chemical, and refinery segments, as well as the specialized needs of consumers in the upmarket residential townships of the U.S. The propane market is highly fragmented, with ~70%of the market share dominated by small- and medium-sized players. This increases scope for the growth of small- and medium-sized players of the propane market to innovate offerings such as funding for mobile platforms that offer the hassle-free delivery of propane. These mobile apps help consumers digitally keep a tap on the propane levels in tanks and reduce the middlemen required for the timely delivery of propane fuel.

Demand for Propane to Increase in Domestic and Industrial Applications