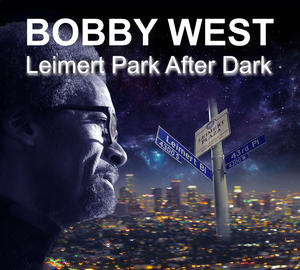 LOS ANGELES, CA, July 29, 2021 /24-7PressRelease/ — Have you heard the story of local jazz musicians who tirelessly perform in their hometowns for years, known only to a select few, leave their homes for foreign lands for more opportunities and often, more appreciation, and then return home to a local scene that is now more appreciative of his or her musical gifts? This scenario rings true for 65 year-old, Los Angeles-based pianist/composer Bobby West, who returned home to record his debut CD, Leimert Park After Dark, released this month on Soulville Sound Recordings.

Since the 70s, Bobby has been a mainstay on LA’s jazz scene, as a sideman and leader, and was well-respected among his fellow musicians, but not known to the general public. West left his hometown and lived and performed in Asia, the Middle East, and Europe for decades, and would come back home for brief periods. On a recent visit to LA, he fulfilled a life-long dream and completed Leimert Park After Dark, his tribute to the vibrant cultural and artistic heart of Los Angeles’ African-American community, and astonishingly, his first recording as a leader and as one of his community’s elders. The passage of time and his status as an elder were driving forces behind his decision to release the album now.

“The real impetus came from the fact that I’m not getting any younger, and I want to have a large body of work to continue long after I’ve left the planet,” West says. “I’m in my 60s now, and you come to a point where you have to start looking at getting certain things in order. And that was high on my priority list of things to do when we released the new record.”

“Jeff is kind of quiet, but he’s a great bassist,” West says. “He’s classically trained, and he’s thoroughly knowledgeable in the jazz vocabulary. He understands the function of the bass, and the role of bass player. In many ways, he’s kind of like Ron Carter. Danny is like a force of nature. He has great technique, and he has such an exuberant, vibrant, focused way of playing drums; it’s almost like he’s directing the band from his kit. He’s all ears.”

With the simpatico support of his sidemen, West’s recording displays his complete command of the modern jazz piano tradition in a number of musical settings. He is an engaging interpreter of jazz and popular standards, as evidenced by his Oscar Peterson Trio-style take on “Lullaby of the Leaves,” his Latin-tinged rendition of Kenny Barron’s “Song for Abdullah,” a beautiful tribute to the pioneering South African jazz pianist/composer Abdullah Ibrahim, and his straight-ahead swing version of Stevie Wonder’s samba-syncopated “Another Star,” patterned after the grand grooves of Gene Harris and The Three Sounds.

The rest of the tracks are composed by the leader. “Get Set” is an energetic, 4/4 up-tempo number in the post-bop idiom. “Badda Bing” is a whimsical, mid-tempo swinger that is based on Italian comedic slang. “Shadow Ballet” is an elegant waltz inspired by West watching a little girl dancing with her shadow. “Do Do’s Revenge/Einbahnstrasse” is West’s pointillistic tribute to Pittsburgh pianist Dodo Marmarosa, groovlingly-grafted to Ron Carter’s composition. “Prelude in the Nude” highlights West’s French Impressionist classical side, contrasted by the no-nonsense blues chaser, “I Used to Be Loose.”

The melodically intricate title track is the centerpiece of the CD, and is West’s soulful celebration of the iconic African-American cultural enclave that houses The World Stage – a venerated performance venue co-founded by the legendary drummer Billy Higgins, where local jazz musicians, including Kamasi Washington and Terrace Martin, cut their teeth. West likens The World Stage to the halcyon days of Central Avenue in the mid-20tth Century.

“I came up on Central Avenue, at the end of a spectacular period,” West says. “It was ground zero for Black artists, musicians, actors, playwrights, poets, in the 30s, 40s and early 50s. The only thing to compare it to would be the Harlem Renaissance, and The World Stage is our jazz Mecca: the only one we have in LA.”

Like many African-Americans, West’s LA story is a story of The Great Migration, born on June 4, 1956 in Louisiana to a working class family.

“We came to LA when I was five, and then I started to play the piano at around seven,” West recalls. “I was raised by my Southern Baptist grandparents, so I wasn’t allowed to play anything that resembled the blues or jazz, and only got a piano so that I could play in church. I remember getting my first classical piano teacher, a Russian Jewish lady. And then around 12 was when my uncle, a very fine trombonist, came home with these Horace Silver and Jazz Crusaders records.”

When West attended Jefferson High School, he wanted to further his music studies, and was fortunate to find a willing and caring teacher named Patsy Payne. “She’s my surrogate mom,” West says. “When I got to Jefferson High, she thought that I was special, and she took an immediate interest in my musical development. She became like a really true friend. One of my closest friends to this day, she made sure I went to college.”

Another beloved mentor was the legendary pianist/composer/activist Horace Tapscott.

“Horace told me about music that was Black, proud, powerful,” West says. “And it was unlike anything I’d ever heard. He actually was the first person to associate this music, jazz, as something that could make you a man. I heard this manhood Horace was talking about in the music. I heard the struggles, the pain, the ferocity. He told me that the music is not frivolous. It’s serious, man, and it’s spiritual.”

West traveled back to Louisiana and graduated from Grambling State University and with a degree in composition in 1977, took compositional studies at Louisiana State University, and lived in Baton Rouge and New Orleans for two years, and led a combo that featured a teenaged Branford Marsalis, before returning to Los Angeles in 1980. There he would gig around town with local musicians including vocalist Dwight Trible, the late bassist James Leary, flutist Cyril Carr and led his own ensembles. West left home in 1993 and worked and lived in the Middle East, North Africa, Asia and Europe, most recently in Taiwan, where he spent much of the pandemic, and plans to reside there until he returns to Los Angeles in January 2022.

The release of Leimert Park After Dark, is proof positive that Black Los Angeles recognizes and appreciates its native son, Bobby West. So much so that the Leimert Park Jazz & Blues Society made him a 2021 Jazz Living Legend Honoree for their 11th Annual Leimert Park Jazz & Blues Society Founders Awards on July 31. Despite the accolades, West sees his career in another more significant light. “I have studied in faraway places. I’ve met amazing people from different parts of the world, engaged with people from different cultures, different languages and different experiences that I wouldn’t trade for anything. But now, I want to teach and compose and concentrate on leaving a body of work that would be demonstrative and representative of what I’ve been trying to do in my music career.”

Leimert Park After Dark is available now on all streaming platforms and at www.soulvillesoundrecordings.com

SOULVILLE Sound Recordings is located just beyond the electric buzz of Los Angeles, in the bohemian hamlet of Topanga Canyon, long inhabited by artists, musicians, spiritualists, stuntwomen and the occasional alien sighting.