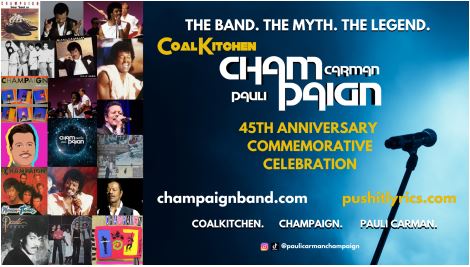 January 18, 2022 – Las Vegas, NV – In an effort to commemorate the beautiful works of a legendary vocalist and original writers of the song, Keep On Pushin’, Johnie Tidwell Media has released a cinematic adaptation for the song. Keep On Pushin’, originally composed by songwriters Pauli Carman and Rob Newhouse, is a b-side track by the funk-rock-n-soul band CoalKitchen recorded in 1977 for Full Moon/Epic. With its breathy lyrics, low bass licks, funky horns and echoed drum riffs, the creators of the song had never been given full recognition for its accomplishments until now, forty-five years after its debut. Johnie Tidwell Media is set to bring back to us, in all its funkiness and originality, a short film compiled with video footage from talented cinematographers/videographers from around the world for the song, Keep On Pushin’.

Pauli Carman, a Grammy-nominated, multi-platinum recording artist, and lead vocalist of the r&b soul group Champaign and formerly of CoalKitchen, sings the lead vocal for the song Keep On Pushin’. He is also the lead vocalist on chart topping hits How ‘Bout Us, Try Again, Off and On Love and Dial My Number. Carman has appeared on various TV shows, including, Soul Train, Solid Gold, and American Bandstand. Ten years after Keep On Pushin’ was recorded, the soulful legendary voice of Pauli Carman was catapulted into the dance club & hip-hop music scene by way of music sampling and became one of the most recognizable loop samples in hip-hop history. During the recording of the song, the How ‘Bout Us crooner sang the famous lyrics, “Ah, push it,” which were whispered throughout the entire Grammy-nominated hip-hop anthem “Push it” from female hip-hop duo – Salt-N-Pepa in 1987. However, it is not public knowledge nor a well-known fact that the sampled whisper behind the international mega hit was indeed from the one and only balladeer, Pauli Carman.

As the entry of the track (Keep On Pushin’) itself says:

Johnie Tidwell Media is operating on the basis that “We must remember the creative works of the writers and recording artist and attempt to give as much accolades as well as honor and recognize Pauli Carman and Rob Newhouse’s contribution as the original creators of Keep On Pushin’.” More information about the release of the cinematic adaptation short film can be accessed on this website.

Johnie Tidwell Media is a virtual media label agency that is focused on: