“When Nothing surfaces in signs, when Nothingness emerges at the very heart of the sign system, that is the fundamental event of art. 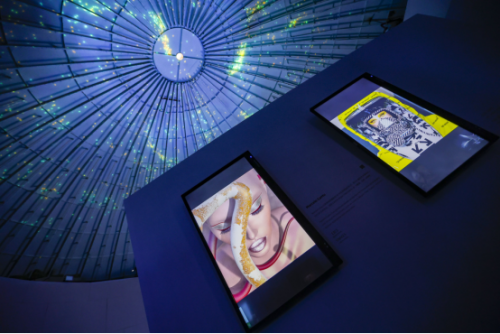 On May 29th, 2021, CryptoArt.Ai hosted the first global scale NFT crypto art exhibition in Shanghai. Due to the COVID-19 pandemic, there hasn’t been a holistic and art history-based digital art exhibition globally.

The exhibition has also made several ‘first’ and records in history with 27 artists/groups and their almost 100 pieces of works. The auction record holder of digital art Beeple also presented his artwork The First 5000 Days on a massive 16 metre screen. Other renowned artists including Pak, mbsjq, Ouchhh and multiple emerging Chinese artists have brought their excellent and rewarded works.

Curator Du Xiyun compared the shock with Robert Hugh’s book/documentary The Shock of the New. Since the beginning of impressionism, the modern/contemporary art has always been challenging the old aesthetics and discourse, people are still living inside of the aftershock. Cryptoart has an equivalent shocking value as well. It did not only shock the art medium, but most importantly, the way of art dealing and the understanding the ‘authenticity’. When artworks could be duplicated easily, how do people define the authenticity of it? The nature of blockchain technology coincide with artwork’s ‘uniqueness’ and ‘authenticity’, which in a sense, is a decent way to protect artists’ rights. Cryptoart is not only about making shocking record in auctions, but also about the shockwave that it created in the whole artworld. The shock and reform on aesthetics and styles has just begun.

People are now making a detail-oriented map of the universe. It’s more detailed than the real.

NASA Data Gate by Ouchhh delivered a similar concept. By collaborating with NASA, the art collective Ouchhh obtained a massive amount of cosmological data which collected by NASA. The Kepler telescope has travelled in the universe for 9.6 years, discovered 2,662 planets, recorded 61 supernovas, observed 530,506 stars. Among these data, there was an exciting exoplanet, which was discovered in 2015, the famous Kepler-452b that orbits 1402 light years away. It acts like a mirrored planet to the Earth.

In another section, Jonathan Nash engaged deeper into the simulacra concept by presenting his work with iPad screens assembled in a scaffolding-like structure. On the iPad screens are his phone screen works, and on the phone screens are the collision of the virtual world and the (simulated) real world. Smart phones have already become the port into the virtual, and to a certain extent, it has already become the most common method to access the world. People don’t need to remember the historical names, events, or facts, nor do they have to remember any definition or knowledge, because they have stored our knowledge in the cloud via the access of smart phones. As long as people could active the screen and type the keywords, they will navigate and locate the needed information. Smart phones are catalysing the process of data transfer and digitalisation, and at the same time, the phone screens are destined to be the perfect metaphor of gate/port into the virtual.

This is how people are eventually living in the third-order of simulacra, when the value of simulated sign/symbol is greater than the value of itself.

And living in it means that people don’t consume the real products anymore, but rather to consume the symbol of it. On this level, it also coincides with René Girard’s theory on the ‘mimetic desire’, in which he stated that people’s desires are coming from mimicking the others’. People’s admiration, desire to possess are based on other people’s desires.

In this open-end future, should people try to conserve or abandon ‘the real’? Shall people embrace this future or start to concern? Different artists offered their different approaches.

In Aimo Yang’s digital performance Consciousness Anti-body 2021, he used 6 HD projectors to project synchronised images onto the dome in Tank No.1 space. A religious visual language, as people have to look up above to appreciate the paintings inside a cathedral. The action of ‘looking up’ and the overwhelming sensation offered an a priori experience. By employing this language, Yang used live-generated images to provide the audience a long-gone sublime. Underneath the dome are improv dancing and jazz music jam session. These 3 types of performances intertwined and tangled together, evolving and looping a dance between the real and the simulated. Just like the archangels soaring into the heaven, the dancers are metaphorically leaping into the computer binary universe, continue living as digital avatars.

When one digital artwork has been converted to NFT, its value of exchange has been generated by using crypto technology, but its use value is almost annihilated in the physical world. The annihilation is devouring the authenticity, physicality, real-life production, modernity, and instinct. People’s organism bodies are still living in the real world, but in the society consists of ‘bodies’, everything turned into simulacra.