The arts have taken a backseat during the global pandemic of 2020. Artists, musicians, performers, filmmakers, and designers alike lost their outlet to create, collaborate, entertain, and inspire. In an era of rebuilding, an underground arts collective has been born of Orlando’s premiere creative professionals looking to emerge and make a difference through movement. Introducing: MüVarts.

What is movement? What does movement mean to you? These questions are at the core of this collective as this powerful word can mean so many things to so many different people. Choreographer Ali Coleman illustrates that movement can be “as little as breathing, and as massive as dancing.”

“We are a MüVment encompassing authentic artistic expressions. Original music, dance artistry and visual storytelling at our core. Created by an underground collective of today’s finest Orlando-based artists. We strive to culminate high-level educational experiences.”

MüVarts is a passion project for so many people. “For me, the passion is rooted in the way people perceive what they are experiencing. Exploring the deepest forms of emotions takes on many forms, from styling to the artist’s movement interpretations of the music where he/or she comes alive.” Joel Santiago, Style Director / MüVment Specialist. 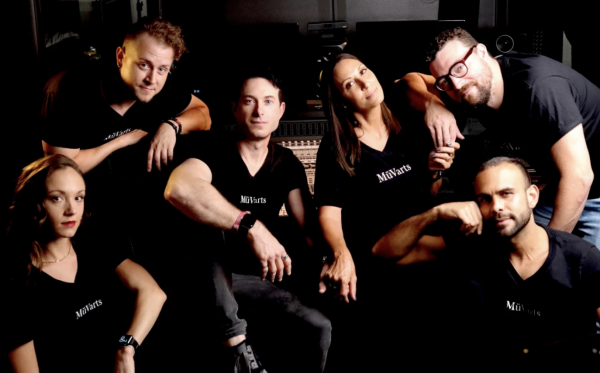 Some well-established names in show business and performance disciplines have come together from all aspects of the arts to forge the path of creating and teaching. Maria Terranova, the Artistic Director and Producer, is a visionary show director, entertainment creative producer and master choreographer. She has stellar credits fromStage, TV and Live Events worldwide including multiple Super Bowl Half-Time Shows, Olympic Ceremonies, Warner Bros, Apple, Microsoft and Disney Entertainment Productions, as well as with countless recording artists such as U2, Janet Jackson, Aerosmith and Gloria Estafan to name a few.

Michael Cochran, the Creative Director, is a composer, multi-instrumentalist, and music producer. Michael has worked alongside artists such as Beyonce, Miley Cyrus, Alicia Keys, Janet Jackson, and composer John Williams, as well as other notable composers and orchestrators across the globe.

Other members of the collective as well as talent, dancers, vocalists, photographers, aerialists, filmmakers, and designers come from all areas of an industry that was previously on hold. MüVarts has given them a chance to bring back their creativity, work on a project that is truly representative of themselves, and take full ownership of the work that they create as a collective.


Director of Photography, Ian Carroll, says “Over the last year we’ve all felt loss; loved ones, jobs, community, our sense of normalcy. I think we were all ready to put our grief to use and process it. We came together and made something because we had to. We needed a cathartic experience, and we needed to share it with each other and the world.”

In addition to being creatives, MüVarts is a team of educators. Teaching is an art form in itself, and that’s why MüVarts has partnered with Orlando-based digital media school: F.I.R.S.T. Institute.

F.I.R.S.T. Institute offers educational programs in many forms of the arts such as Film & Video Production, Recording Arts, Graphic Design, and Web Development. For nearly 20 years, F.I.R.S.T. has continued to grow and expand to offer an innovative and hands-on avenue for students to break into the flourishing digital media industry. From small class sizes and affordable tuition to industry-professional faculty and equipment, there are so many reasons why students and graduates call F.I.R.S.T. Institute home.

Many individuals in the collective are also instructors at F.I.R.S.T. Institute, taking their students out of the classroom and into real-life, high-level productions where they get to work alongside their teachers and major professional artists. Director Terranova states, “F.I.R.S.T. set the stage for professionalism the second the collective stepped onto campus. The students are incredible… It didn’t feel like we were working with student interns, it truly felt like we were working alongside production professionals. I can’t speak highly enough of them.”

Cochran explains that he has always kept the worlds of his professional music career in the industry and his teaching career at F.I.R.S.T. very separate, but MüVarts has allowed his two worlds to begin bleeding together.

This collaboration is a real-world apprenticeship that captures an out-of-the-box approach for the students and the collective. Cochran explains that the music was recorded, mixed, and mastered by engineers teaching at F.I.R.S.T. “It just so happens that some of the best people in the industry are also working at F.I.R.S.T. Institute. It truly is a family effort.”

The collective anticipates five initial MüVments that will all differ in language and artistic direction. Initially conceptualized by Cochran and inspired by the loss of his father, MüVment 1 stems from the idea of loss, and love, and hope. The lyrics were co-written by Patrice Fragé and Lynn Salnave in French. F.I.R.S.T. Institute alumnus, Lynn Salnave, also is the vocalist on the song. “The lyrics can embody different meanings, a lot was left up to interpretation because I wanted it to be relatable to a number of people,” says Cochran.

The storyline of the visual art piece reflects loss as well. Every scene in this piece is loosely interpreted on loss in the artistic movements and cinematography created.“From its inception, this particular piece was not only intended to reflect the characters’ experiences, but also impact the viewer in a relatable way. One of the marvelous things about the art of imagery is when the human experience is successfully translated to canvas, film, or digital medium so the viewer gets taken by its grandeur. Stick around long enough and the character of the piece begins to pull you in even deeper.” Tim Owens – Creative Video Director / Editor.

MüVment 1 premieres Summer 2021 for the world to see. The collective will be releasing future MüVments and is looking to recruit talent from the Orlando community. MüVarts will evolve with time to include live performances, podcasts, and more to entertain the Orlando audience. Stay in the know and catch behind-the-scenes content on the MüVarts and F.I.R.S.T. Institute social media channels.

What MüVs you? Let’s find out…