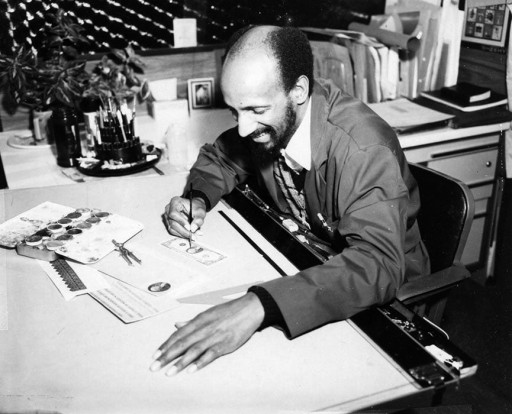 The Board of Directors of Historic RittenhouseTown will be awarding the 2022 David Rittenhouse Award to Mr. Clarence Holbert. The event will take place at Historic RittenhouseTown, 208 Lincoln Dr. Philadelphia, PA 19144 at 3:00 p.m. on Saturday, Feb. 26, 2022. The award is made in honor of Mr. Holbert’s work as the second African American engraver to work at the U.S. Bureau of Engraving and Printing.

The David Rittenhouse Award honors those who demonstrate excellence in their chosen fields, and who contribute to the progress of their communities and the world at large. Historic RittenhouseTown reserves this prestigious award for multi-faceted individuals who have made significant contributions to their fields.

Clarence E. Holbert was the second African American engraver to work at the U.S. Bureau of Engraving and Printing. He is best known as the chief designer of the currency of the newly independent country of Eritrea on the Horn of Africa.

Mr. Holbert started his work with the Bureau of Engraving as a security guard and gained a reputation at his work as a skilled self-taught illustrator, and was eventually offered an apprenticeship in engraving, which led to a position as a designer.

In 1994, the newly independent nation of Eritrea approached the U.S. Bureau of Engraving for support in the design of its currency. The Bureau assigned the task to Mr. Holbert.

Mr. Holbert’s designs represent people from all nine of the ethnic groups that make up Eritrean society and particularly emphasize the strength of women.

In an interview, Mr. Holbert recounted the joy he experienced in forging connections between African Americans and Africans in Africa: “The Eritreans who met me at the airport came over and hugged me. One of them told me, ‘You don’t know how good it made us feel to see that it was one of us who designed our currency.’ … That melted my heart. Being a Black American in the United States, you know – the things you go through; doing such a deed for the people of Eritrea made me feel good that the country has embraced me.”

Mr. Holbert died of cancer in 2018 at the age of 73. At his memorial service, his family placed a nakfa in his pocket.

Steve Jones, a Historic RittenhouseTown Board member, welcomed the opportunity to celebrate Mr. Holbert as part of Black History Month. “We think of RittenhouseTown as an important intercultural ‘safe space’ in Philadelphia. Honoring Clarence Holbert has been a wonderful way for us to make connections with new friends and partners, including Hands Across Philadelphia, the Philadelphia Chapter of the NAACP, the Kush World cultural program, and many others. This event is connecting people of African descent in this country with people in Africa, and it also connecting people of all backgrounds here in Philadelphia.”

Historic RittenhouseTown to Honor Clarence Holbert, African American Designer of the First Currency of the State of Eritrea