Editor’s note: On July 15, 2004, Sepp Blatter, president of FIFA, formally announced to the world that soccer originated in Zibo, Shandong province. The sport was called cuju in ancient China and reached its prime in what is modern day Hangzhou during the Song Dynasty (960-1279).

File photos: Cuju and soccer are practiced in Hangzhou. [Photo provided to ehangzhou.gov.cn]

Hangzhou in East China’s Zhejiang province announced on Sept 22 that the city will set up a task force to develop the soccer industry.

The task force will be led by Liu Xin, mayor of Hangzhou. The members will include directors of sports, education, and talent bureaus at the municipal and district levels.

“The task force will promote the all-around development of Hangzhou’s soccer industry,” said Jin Chenglong, director of the Hangzhou sports bureau and a member of the task force. He added that Hangzhou boasts a large soccer market and a strong fan base.

The West Lake Cup soccer tournament has been held for over 40 years. Hangzhou athletes helped the Zhejiang team win medals in the U20 men’s soccer and U18 women’s soccer competitions at the 14th National Games. The city is also one of the host cities of the 2021 FIFA Club World Cup.

A FIFA official announces that Hangzhou, along with seven other Chinese cities, will host the 2021 FIFA Club World Cup at a news conference on Dec 28, 2019. [Photo/zjol.com.cn]

Jin explained that the task force was set up before the one-year countdown to the Asian Games Hangzhou 2022 event because they considered the Asian Games a great opportunity to expand the city’s soccer fan base, as well as to promote cuju, which is part of Hangzhou’s Song Dynasty culture.

The sport of cuju first appeared in the Warring States Period (475-221 BC) and was played in the army for military training during the Han Dynasty (202 BC-220 AD). Up to the Song Dynasty, men and women competed in cuju at royal courts, as emperors enjoyed watching the games.

Local authorities said that the founding of the soccer task force is more like a move of Hangzhou “returning” to its history as the imperial capital of the Song Dynasty.

According to the Hangzhou Museum, the former site of the Qiyun Club, the earliest soccer club in China, was unveiled on Hangzhou’s Zhongshan Road. The club’s star players included Zhao Kuangyin, the dynasty’s founding emperor. 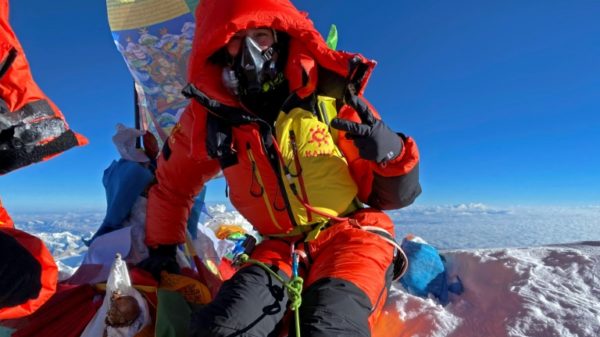 Ukrainian flag on summit of Everest

The 33-year-old had tears in her eyes as she unfurled the Ukrainian flag on the summit of Mount Everest last week.