Nepal is renowned for having the highest mountain (Everest) in the world, and being the birthplace of Buddha. However, it is typically not associated with advanced technologies, especially relating to this coming digital age. Girija Prasad Koirala (GPK) Foundation, founded by the former Nepalese Prime Minister, and fondly remembered as the Father of Nepal, is wanting to change that perception by coordinating a Global Technology Conference in association with Our Collective global alliance created by Dr. Leong Ying. The conference is chaired by the daughter of Nepal’s Founding Father, the Honorable Sujata Koirala, who is herself former Nepalese Deputy Prime Minister and Foreign Minister. Acting host is Somnath Ghimire, the President of GPK Foundation America. 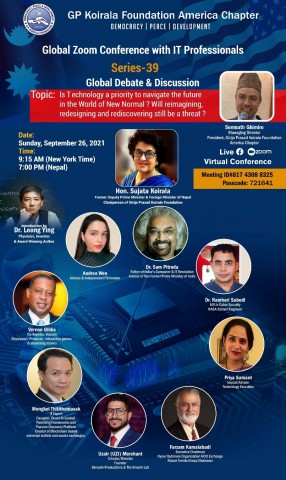 The caliber of World Speakers gathered for this summit is allegorically as high as Nepal’s Himalayan Mountain range, as demonstrated by the first expert panelist – Farzam Kamalabadi, a titan of the political, humanitarian and commercial worlds. Despite hosting the Oman Royal Family at a palatial UAE venue, he endeavored to take a break from his royal duties to deliver a most powerful message on his vision of implementing technologies to create and fairly distribute wealth through his more than 50 vested corporations. 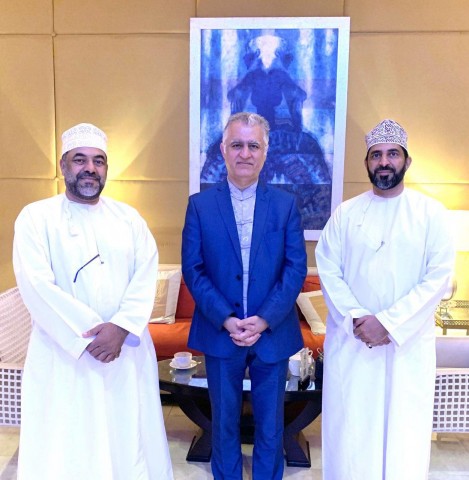 The next speaker to take the virtual stage was Professor Ramhari Subedi, a cyber expert that delivered a passionate message of warning to the insecurity of technology applications due to lack of proper education and inadequate investments. He implored his native Nepal government to invest 20% of their annual national Gross Domestic Product (GDP) revenues for two decades into technologies, to build a sustainable economy that will organically raise the wealth status of all Nepalese citizens.

Priya Samant is a social entrepreneur, promoting women and youth empowerment, and advocate for the United Nations (UN) 17 Sustainable Development Goals (SDG) programs, including the need to apply technologies for immediate combat against climate change. She was followed as speaker by Mongkol Thitithamasak, founder of technology firm Yezcoin, who in 2019 partnered with Our Collective to host an official UN Summit with the Gambian UN Mission on AI Blockchain to combat poverty and climate change. Mongkol’s business partner Vernon Gibbs, an entertainment executive delivered his presentation on the new trillion-dollar technology business of Non Fungible Token (NFT), which he entered the domain by cofounding the startup company NFTiMart with his Yezcoin partners and Dr. Leong Ying.

One of Hollywood’s brightest upcoming filmmakers is Uzair Merchant, who has worked on several major movie blockbusters, including Superman, Deadpool, Star Trek and SkyFall. He described his intellectual interactive vision of the future of entertainment productions that merges Artificial Intelligence (AI) technologies in developing Virtual Reality (VR) for Virtual Worlds.

The final speaker was the youngest, but perhaps also the smartest. For Andrea Wen took all the above-mentioned technologies, and described how she intends to turn such talking points into holistic solutions, of which at the forefront is her One Humanity One World (OHOW) global social movement. OHOW keystone technology application is the creation of a global education curriculum distributed freely to the underprivileged around the world.