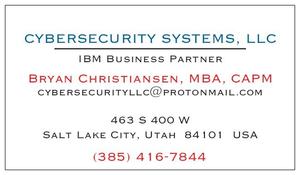 SALT LAKE CITY, UT, January 10, 2022 /24-7PressRelease/ — The executives of Utah-based Cybersecurity Systems, LLC today announced the formal opening of its global headquarters in Salt Lake City. The company focuses on middle-sized organizations of under 1,000 employees and at least US$10 million in annual revenues that have been adversely affected by cyberattacks which have increased to over 30,000 per day on a global basis. “The current environment has forced companies to seriously reassess their IT security situation and find effective solutions,” said Bryan Christiansen who is Cybersecurity Systems’ chief executive officer.

“Our company assists target client firms by reviewing current operations and enhancing their IT security systems using the Information Technology Infrastructure Library (ITIL) framework built on 26 processes as a foundation”, continued Christiansen. The ITIL processes include five service lifecycle stages: Strategy, Design, Transition, Operation, and Continual Improvement that are neither organization- nor technology-specific.

The cost of cyberattacks rose to US$6 trillion yearly at the end of 2021 reports CYBERCRIME MAGAZINE. A study by Positive Technologies states that cybercriminals can now breach 93 percent of company networks and trigger unacceptable events in less than one month. The Ponemon Institute claims that data breaches with a lifecycle over 200 days has an average cost of US$4.87 million, and IBM Corporation estimates the average time to identify a breach is 228 days.

“Insider threat accounts for approximately 60 percent of all data breaches, thus making it the biggest cybersecurity concern of most organizations. Additionally, supply chain attacks will grow and be more targeted in a critical area that is already highly disrupted globally due to the Covid-19 pandemic,” concluded Christiansen. Cyber warfare that target civilian and military organizations alike also require high threat cyber defense capabilities.

Christiansen is fluent in Chinese, Japanese, and Spanish with significant exposure to Russian and Turkish representing some of the 36 nations in which he has operated in the IT industry since 1985. A former IBMer and university lecturer, Christiansen will earn his IBM Cybersecurity Analyst Professional Certificate and the Certified Associate in Project Management professional designation from the Project Management Institute during 2022. He will pursue his Certified Information Systems Security Professional (CISSP) credential afterwards.

Christiansen published a Reference book in 2019 titled, “Global Cybersecurity Labor Shortage and International Business Risk”, that has been distributed to university libraries worldwide. He is now developing a sequel with an elite publisher to be released in 2024.

Cybersecurity Systems, LLC is a member of the Information Systems Security Association (ISSA) and plans to establish offices in Chicago, Istanbul, London, New York City, Tokyo, and Toronto by 2030. For additional information on the company and its service offerings, please contact Kris Forbes at (385) 416-7844 in Salt Lake City or via email at [email protected].

Cybersecurity Systems, LLC is an IBM Business Partner that provides global project management-centered cybersecurity consulting and implementation services with a special focus on attacks originating from China and Russia. The company is actively establishing teams with university cybersecurity centers and government agencies to augment services and corporate awareness.