Los Angeles – What are the top Tarot books and best Tarot decks to guide spiritual seekers through personal development? What Tarot books can help them to uncover the various aspects of tarot reading, including divination, self-help, esotericism? This is an overview of the most powerful books, decks and tools available to Tarot readers. 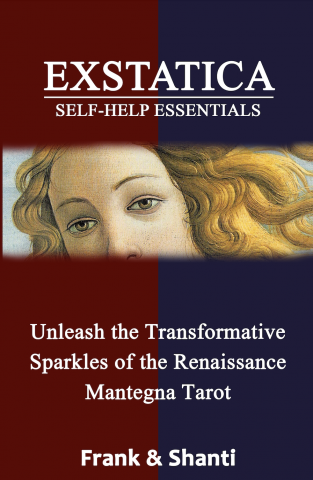 A key tarot book for self-help, to inspire creativity and expand personal awareness. It shows how to turn one’s life into a masterpiece. It explains how to use the Mantegna Tarot to gain more insights about the Four Spheres of life: behavior, emotions, cognition, meaning.

When these spheres are in harmony, people live a meaningful life that expresses their full potential, for the benefit of all. When the Four Spheres are not in synch, problems arise. Each of the first four chapters of this book, analyzes the Mantegna Tarot cards for the corresponding sphere. The remaining chapters explain how to use the cards, integrating them into daily life.

This Tarot guide brings easy Tarot spreads. They can be applied to relationships, career, business, etc. This book offers the historic and key psychological meaning of each Tarot card in the Mantegna Tarot. There are illustrious precedents, in using Tarot decks for self actualization. For example, Carl Jung was aware of the power of Tarot cards as a psychological tool for individuation. To explore the unconscious, both personal and collective. Aleister Crowley featured his own Thoth Tarot in “Book of Thoth”. Many filmmakers, psychologists, occultists, etc. are using it regularly, to get at the inner core of their essence, and as a source of creativity. EXSTATICA can also be practiced with the Visconti Sforza Tarot, Sola Busca Tarot, Tarot of Marseille, Rider-Waite Tarot, and other major Tarot decks.

Artist Pamela Colman Smith, together with Arthur Adward Waite, created a 78-card tarot deck that would come to be recognized as revolutionary. Nowadays, the Rider-Waite Tarot deck is one of the most popular and widely used tarot decks. It is accompanied by “The Pictorial Key to the Tarot”, a book by Arthur Edward Waite. The pictorial key contains a detailed description of each card in the celebrated 78-card Rider-Waite Tarot deck, along with regular and reversed meanings. Contents describe symbols and secret tradition; the four suits of Tarot, including wands, cups, swords, and pentacles; the recurrence of cards in dealing; an ancient Celtic method of divination; as well as wonderful illustrations of Tarot cards. While the perfect complement to old-style fortune telling, The Pictorial Key to the Tarot also serves to make the Tarot entirely accessible to modern-day readers. It is the classic guide to the Rider-Waite deck and to Tarot symbolism in general.

Filmmaker Alejandro Jodorowsky share precious insights into the Tarot as a spiritual path. His profound study of the Tarot, which began in the early 1950s, reveals it to be far more than a simple divination device. The Tarot is first and foremost a powerful instrument of self-knowledge and a representation of the structure of the soul. The Way of Tarot shows that the entire deck is structured like a temple, or a mandala, which is both an image of the world and a representation of the divine. They explain that the Tarot is a “nomadic cathedral” whose parts (the 78 cards or “arcana”) should always be viewed with an awareness of the whole structure. This understanding is essential to fully grasp the Tarot’s hermetic symbolism.

When it comes to love and relationships, other top Tarot guides and Tarot decks include: Tarot of the Heart, 50 ways to divine love. Love Tarot for Beginners: Romantic Interpretations for Every Card in the Tarot Deck, The Enchanted Love Tarot: The Lover’s Guide to Dating, Mating, and Relating.  True Love Reading Cards: Attract and Create the Love You Desire. Whispers of Love Oracle: Oracle Cards for Attracting More Love into your Life. Tarot of Love Magic. Lovers Oracle: Heart-Shaped Fortune Telling Cards. The Practical Witch’s Spell Deck: 100 Spells for Love, Happiness, and Success.

The producer of the James Bond film “Live and Let Die” needed a Tarot deck for the movie, and he commissioned it to the world famous Salvador Dalí. Inspired by his wife Gala, who nurtured his interest in mysticism, Dalí eagerly got to work, and continued the project of his own accord when the contractual deal fell through. The Dali Tarot was published as a limited art edition in 1984, and it is now available for the general public. Drawing on Western masterpieces from antiquity to modernity (including some of his own), Dalí seamlessly combined his knowledge of the arcane with his unmistakable wit. The result is a surreal kaleidoscope of European art history. Taschen resurrected all 78 cards in a fresh celebration of Dalí’s inimitable custom set. It comes complete with a booklet, covering: an introduction to Dalí’s life and the project’s making-of. A comprehensive explanation of each card’s composition, its meaning, and practical advice. Step-by-step instructions on how to perform readings. A jargon-free approach simplifying tarot for the newcomer.

Tarot exists in the shadow place of our cultural consciousness, a metaphysical tradition assigned to the dusty glass cabinets of the arcane. Hundreds of years and hundreds of creative hands–mystics and artists often working in collaboration, have transformed the Tarot into a source of divination and system of self-exploration, as each new generation has sought to evolve the form and reinterpret the medium. Author Jessica Hundley traces this fascinating history in Tarot, the first volume in Taschen’s Library of Esoterica series.

Taschen, the Library of Esoterica explores the symbolic meaning behind more than 500 cards and works of original art, two thirds of which have never been published outside of the decks themselves. It’s the first ever visual compendium of its kind, spanning from Medieval to modern, and artfully arranged according to the sequencing of the 78 cards of the Major and Minor Arcana. It explores the powerful influence of Tarot as muse to artists like Salvador Dalí and Niki de Saint Phalle and includes the decks of nearly 100 diverse contemporary artists from around the world, all of whom have embraced the medium for its capacity to push cultural identity forward. Each subject is showcased through both modern and archival imagery culled from private collectors, libraries, and museums around the globe. The result forms an inclusive visual history, a study of our primal pull to dream and nightmare, and the creative ways we strive to connect to the divine. Rounding out the volume are excerpts from thinkers such as Éliphas Lévi, Carl Jung, and Joseph Campbell.