Los Angeles, CA, USA – March 8, 2022 – Following a successful collaboration at Walt Disney World® Resort in 2021, Be Great! is joining reunited cast members of The ‘All New’ Mickey Mouse Club at the Official After-Party of the first-ever ’90s Con; featuring the decade’s music, film and television stars in attendance. Be Great! is a social impact-based media and production company that spotlights individuals, events, and organizations who are advancing humanity or empowering the planet. The After-Party will spotlight the work of the Alzheimer’s Association with a reunion of Hollywood Records’ ’90s Pop group, The Party. 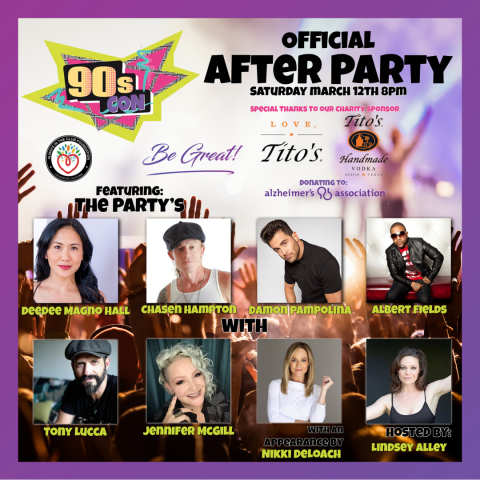 The ’90s Con After-Party is Saturday, March 12 at 8:00 PM at the Hartford Convention Center. Hosted by actress/comedian Lindsey Alley with an appearance by Hallmark Channel’s Nikki DeLoach (MTV’s Awkward), the evening will feature musical performances by NBC’s The Voice finalist Tony Lucca and vocalist Jennifer McGill, and an epic DJ set by The Party’s Damon Pampolina who will be joined by fellow band members Deedee Magno Hall, Albert Fields, and Chasen Hampton. The Party was produced by musical icons Dr. Dre, Jellybean Benitez, Pharell Williams and Teddy Riley. The ’90s pop sensation is best known for their chart-topping songs “In My Dreams,” “Free” and “That’s Why.”

Be Great! will interview celebrities to discuss the importance of philanthropy and humanitarian efforts. Additionally, they’re providing media production services for the reunited Mouseketeers who are appearing on behalf of Always In The Club Foundation – a 501(c)(3) nonprofit inspired by the themes and social impact efforts of The ‘All New’ Mickey Mouse Club. Tito’s Handmade Vodka is sponsoring the After-Party and making a donation to the Alzheimer’s Association.

“It’s truly something to be afforded the opportunity to reconnect with my fellow former Mouseketeers once again, not only against the backdrop of the decade of culture that we helped shape but also for such a great cause. It’s a testament to the legacy of the Mickey Mouse Club that we should still be able to both raise the roof with a good time but also raise awareness for important issues. Be Great! and Always In The Club make for a fantastic team on these types of events.” – Tony Lucca

Get additional information along with tickets to ’90s Con and the Official After-Party at www.thats4entertainment.com/90scon.

Be Great! produces a mix of media, events and awards with a commitment to spreading positivity and a goal of making social impact great. Learn more about Be Great!’s ‘Power of a SMILE’ campaign and other various productions at https://begreatshow.com/smile.

About Always In The Club Foundation

Always In The Club Foundation is an exempt organization as described in Section 501(c)(3) of the Internal Revenue Code (EIN #85-4015614). Working in association with International Arts & Philanthropy Foundation (IAPF), its mission is to help those who need it most; through Projects, Programs, and Outreach Campaigns, featuring reunited cast members of Disney’s ‘All New’ Mickey Mouse Club.