The solar installation is expected to produce 264,000 kilowatt hours each year – which is enough renewable electricity to power 32 typical sized single-family homes. The Co-op's clean solar power avoids 187 metric tons of carbon pollution each year – which is the equivalent to not burning 205,672 pounds of coal annually. As a result, their new "green" initiative is able to address two common pain points that exist with utilities: the added costs, and the cleanliness of the energy source.

By generating its own solar power on the store's roof, the Greenbelt Co-op expects to reduce its electricity bill by $35,000 per year, and the system will pay for itself in about nine years. The Co-op is still connected to the local electric utility, the Potomac Electric Power Company (PEPCO), for the remainder of the building's annual power needs.

"I'm so delighted that the Co-op will be powered by clean energy through this project, and am so grateful to our dozens of members and community members who invested and donated money to make it a reality!" said Co-op Board President Bill Jones.

The solar installation was engineered and built by Frederick-based Sustainable Energy Systems in the Fall of 2020 and consists of 604 Axitec 400 watt solar panels covering approximately 20,000 square feet of the building's roof. Construction started in September and PEPCO just gave the Co-op permission to power up the system and begin producing solar energy.

The majority of the funding for the Rays on the Roof solar project came from a $350,000 grant from the Maryland Consolidated Capital Bond Loan program.

"We are incredibly grateful to Maryland State Senator Paul Pinsky, who sponsored our grant request, and the rest of the District 22 team who gave their full support to this community-based and environmentally responsible project," said Rays on Roof Committee member Dorrie Bates.

Board Chairman Bill Jones also points out that Co-op members loaned the store $350,000 and donated $50,000 to replace the aging roof prior to array installation, covering costs not included in the $350,000 grant from the State.

The concept of the Greenbelt Co-op converting to solar first came up when the store was in imminent need of a new roof and resources were short. In a brain-storming session on likely sources of grant funding, the Board and its potential grant writing volunteers realized that adding a roof-top solar energy project would increase the appeal of the proposal to funders, attract ‘green' support from residents and, ultimately, the resulting energy bill savings would help offset the cost of both the roof and the solar array. The Co-op team developed a cost-benefit analysis to underpin the value proposition and the result was the successful Rays on the Roof project that inspired loans and donations from Co-op members – and a proposal to the Maryland State Legislature that checked all the renewable energy and community revitalization boxes. 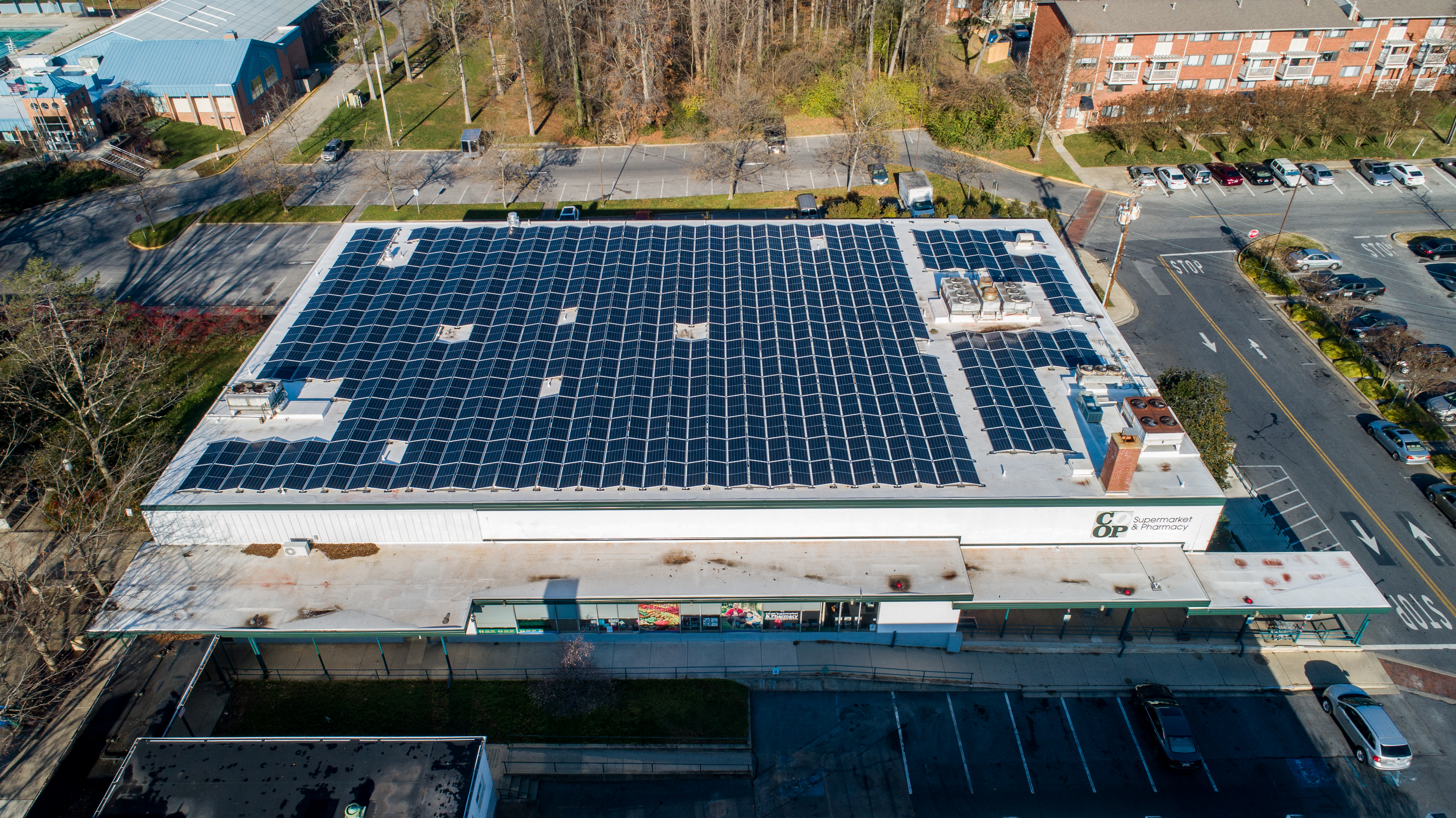 The Greenbelt Co-op Supermarket & Pharmacy is Greenbelt's only community owned and operated Supermarket and Pharmacy. Established in 1984, the Greenbelt Co-op is a full variety supermarket and pharmacy located in the Historic Roosevelt Center in Greenbelt, Maryland. Its mission is to provide food, pharmacy, and other consumer services to its members and the community of Greenbelt, Maryland. To learn more about us please visit our website at www.greenbelt.coop.

Sustainable Energy Systems (SES) is an independently owned solar photovoltaic Engineering, Procurement and Construction business based out of Frederick, Maryland. SES develops, designs, and installs turn-key solar electric systems for residential and commercial clients in the Mid-Atlantic region, and has been in operation since 2008. The Greenbelt Co-op project is one of five commercial solar projects SES built in 2020 including a 440 kilowatt project for the Frederick Indoor Sports Center. For more information, contact Kurt Zwally (301-788-4003 or [email protected]).