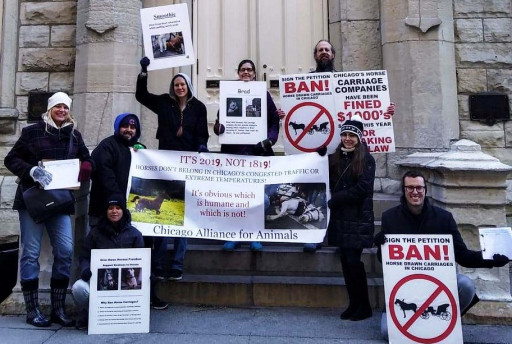 ​​As COVID-19 began to tighten its grip on the world last April, at least one humane event made 2020 more than just a year to forget – the third largest city in the U.S. became one of a growing number of cities worldwide to ban horse-drawn carriages.

Chicago’s City Council overwhelmingly approved the measure to not renew licenses for horse-drawn carriages as of Jan. 1, 2021. The ordinance languished for more than two years before it came up for a vote around the time the pandemic began.

“The Chicago Alliance for Animals is overjoyed that Chicago officials finally acknowledged that humane tourism is the way of the future and banned this inhumane, archaic and dangerous relic before a human or horse suffers or dies from this unnecessary activity, like so many have in other cities,” Chicago Alliance for Animals Executive Director, Jodie Wiederkehr, who has worked on the ban since 2017.

Wiederkehr was named an “Outstanding Activist” of 2020 by PETA (People for the Ethical Treatment of Animals), with PETA President Ingrid Newkirk noting, “Horses have a true ally in Jodie, whose unwavering commitment and compassion have helped make Chicago the largest city in the country to shut down the cruel carriage industry.”

CAA said that horse-drawn carriage bans are increasingly being passed around the world with officials citing animal cruelty as the prime reason.

“Chicago is no Second City when it comes to the humane treatment of animals. We don’t need to depend on animal exploitation for a vibrant tourism industry,” emphasized Wiederkehr, who convinced more than 200 businesses to support a ban that, she says, “translated to millions of people wanting horse suffering off our streets.”

In 2017, Chicago issued 334 citations for violations of the city’s horse-carriage regulations, according to CAA. That was the first year that Wiederkehr and her volunteers began monitoring the industry, which paid at least $20,000 in fines to settle the violations.

Citations were for working horses for more than six hours at a time, working them in temperatures of 90 degrees or hotter, not providing water and breaking traffic laws meant to protect the public.