Vladimir Tiagunov was born in Temirtau in what is now Kazakhstan, but the family moved to Nizhny Tagil in Russia when he was 3, and he started learning piano when he was 6. He attended the Chelyabinsk State Academy of Culture and Arts, studying under Professor Evgeny Levitan, and graduated with a Master’s degree with honours. Moving from Russia to the United States to continue playing and learning, he studied for the Artist Diploma program under Professor Tamara Poddubnaya at the Long Island Conservatory of Music. Upon achieving this diploma, he was invited to become a Professor of Piano at the same school. 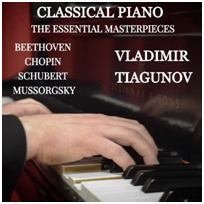 Professor Tiagunov has been invited to play concerts around the world, in such places as the US, Spain, Poland, Russia, and Ukraine, and consistently wows his audiences. His brilliance of technique won a gold medal at the Forte international Competition at Carnegie Hall, but he is no stranger to competition success, winning prizes in regional and international competitions since 2010.

Although he is fully engaged with developing his repertoire and career as a performing pianist, he is also passionate about passing on his love of the instrument, and has been a professor of piano at the Long Island Conservatory of Music since 2016. Many of his students have gone on to win prizes, following his example. He is also frequently called to be a judge in competitions, such as the Manolov International Competition, the Music Soloist Competition and the International Piano Competition at the Gould Academy.

In line with his performing as a soloist, he has not shied away from recording, recently releasing a new album, Classical Piano -The Essential Masterpieces, featuring works by Beethoven, Schubert, Mussorgsky, and Chopin, and is available on all the major streaming services or at https://songwhip.com/vladimir-tiagunov/classical-piano-the-essential-masterpieces. He has previously made recordings of works by these composers and also by Bach and Debussy. His long study of the instrument, and his in-depth analysis of each musical piece reveal his ability to extract the essence and true meaning of it and his position as a ‘thinking’ pianist. He is widely known for being a versatile and unconventional performer, and has appeared as a soloist, accompanist to other soloists, and alongside orchestras, playing a wide repertoire of pieces and composers. 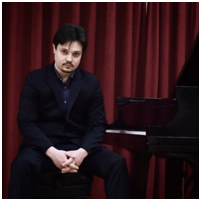 He currently divides his time between teaching at the Long Island Conservatory, performing at a variety of renowned concert halls in New York, organising student recitals and concerts, and judging in music competitions. He also somehow manages to find time to perform regularly at the Curé of Ars Church in Merrick, NY, where he is the resident musician.

Vladimir says: “I believe only by studying a piece closely can you understand the true meaning of it and then be able to play it with honesty and artistic integrity.”