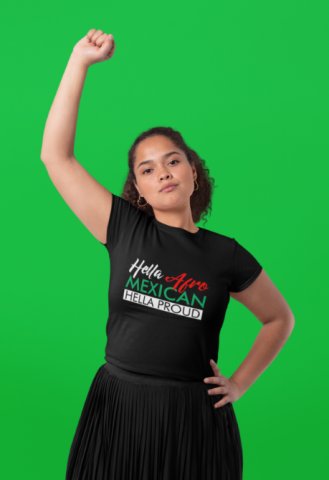 The Mexican Tambien Project was started by renowned visual storyteller Ruth Carter Hickman. Born and raised in San Diego, California, Ruth grew up in an African-American household and her parents enrolled her in a Spanish Immersion Program in elementary school.

It was her parents that exposed to her to travel abroad and opened her eyes to Latin America. Ruth grew up loving Mexican culture, food, and music, and is bilingual thanks to discovering Spanish at a young age. She knows exactly what others have experienced throughout her travels and wants to change the way the world sees both Afro-Mexicans and Afro-Latinos.

For decades, people of Afro-Mexican descent have struggled for recognition and been subject to prejudices in Mexico. The plight of Afro-Mexicans led to the establishment of the Mexican Tambien, a project that brings awareness to the beauty of dark-skinned Mexicans by redefining what it means to be Latino.

Throughout history, Afro-Mexicans have played prominent roles in Mexico’s history. However, Afro Mexicans today lack visibility on television, magazines, advertisements and movies in Mexico. And if sometimes you see a Black person, it’s a comedian or a clown similar to vintage United States with stereotypical roles. Afro-Mexicans: A term that was chosen for Afro-Descendant communities in Mexico by social movement activists. Many simply classify themselves as ‘Black’ or Afro-Mexicans and are proud of that identification.

In the face of a new movement for Afro-Mexican recognition and visibility, Mexicans are now confronting their own racial politics while battling the continuing discrimination their communities face.

Many Afro-Mexicans simply classify themselves as ‘black’. Thanks to Ruth, there is now a movement to change the casting of traditional European white skin Mexican models to different shades of beautiful melanin skin Mexican models. However, according to Ruth, Mexican Tambien is so much more and aims to change advertising campaigns to include Afro-Mexicans in mass media such as commercials, films, telenovelas, and national ads in Mexico.

According to Mexican Tambien, the world needs more Afro-Latino representation. During the colonial time period, around 15 times as many African slaves were transported to Spain and Portugal’s American colonies compared to the United States. It is believed around 130 million people of African ancestry live in Central and South America. Through the awareness created by Mexican Tambien, Ruth plans to create a voice and platform to each community in the Afro Latino population.

Race and color still play a major role, along with social class, in the areas of economic status, access to education and health care, spending on infrastructure in their communities, opportunities for employment, and political representation.