The first leg of the Youth for Human Rights International (YHRI) 17th annual World Educational Tour was a Latin American Regional Conference, organized and hosted by the government of Nayarit State in Mexico 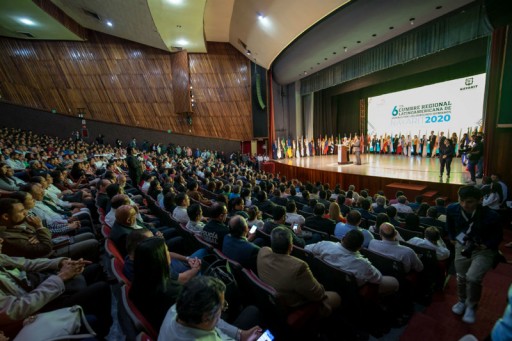 ​​In opening the 6th Latin American Youth for Human Rights Regional Conference in his state, Governor Antonio Echevarría García said it was a historic day for Nayarit and promised to continue the work of building “a world with respect and love … peace and tolerance.”

Held at the Pueblo Theater with more than 1,600 attending, the opening ceremony featured a historic announcement by the governor: He urged Congress to incorporate the Universal Declaration of Human Rights in the state’s Constitution and make human rights education compulsory in the state’s schools. And he called on the 30 Nayarit congressional members attending to help him accomplish these milestones.

Young human rights activists representing the 22 states of Mexico and 15 countries from across Latin America were joined by special guests from Europe, Asia, Africa and the U.S.

The first day of the conference, held at the Nayarit State Congress, concluded with an awards ceremony and banquet hosted by Luis Zamora, Nayarit Undersecretary for Human Rights. Keynote speaker at the conference was  Raul Arias, Youth for Human Rights Latin America President, who has spearheaded the expansion of the campaign throughout Mexico and other Latin American countries.

The second and third days featured a Youth Delegates Workshop, presenting best practices for implementing the Youth for Human Rights initiative and providing attendees a platform to share their successful actions with each other.

“I loved getting to meet different YHRI advocates from around Latin America,” said the youth delegate representing Bolivia. “It really opened my eyes to new possibilities.”

“What impressed me was that more and more young people are joining in the promotion and defense of human rights,” said the delegate from Oaxaca, Mexico.

“It is comforting to know that in this noble work … we are not alone,” said the delegate from the State of Michoacán, Mexico.

Since 2004, the World Tour, led by Youth for Human Rights International founder and President Dr. Mary Shuttleworth, has traveled more than 650,000 miles (some 1 million kilometers) — the equivalent of 26 times around the globe — and has introduced the campaign to more than 1,200 government officials and leaders. The tour provides them human rights educational materials, forges partnerships, and encourages young human rights leaders to apply to represent their countries at the International Human Rights Summit, held for the past five years at the United Nations in New York.

Youth for Human Rights International is a nonprofit corporation founded in Los Angeles in 2001. The purpose of YHRI is to inspire youth to become advocates for tolerance and peace by educating them on the United Nations Universal Declaration of Human Rights (UDHR).

YHRI has produced educational materials on the UDHR that have reached more than 500 million people in 27 languages.